Facebook has released its latest ‘Topics to Watch’ report, which highlights subjects that are seeing significant increases in mention and discussion volume, above the norm, across The Social Network.

The idea of the Topics to Watch report is to highlight rising trends in order to help marketers tap into them before they become bigger shifts. Facebook’s research team says that up to 80% of the topics they've identified in this way have gone on to become more significant movements, so if there's a subject listed that's of relevance to your niche, it may be worth tapping into now to better align your brand with the latest shift/s.

Here's what's getting more attention on Facebook this month.

First up, we have 'aguachile'. 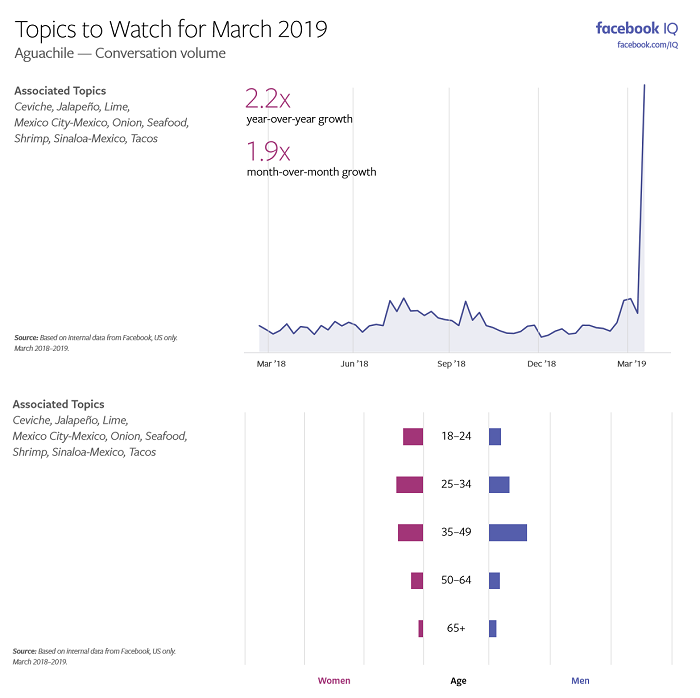 "A traditional dish from the Sinoloa region in Mexico, aguachile combines lime juice, cilantro, cucumbers, onions and hot peppers with raw shrimp or other forms of raw shellfish. While considered a common street food in Mexico, it's recently made its way to the US, as ceviche lovers discover a similarly delectable dish that boasts even more spice."

An interesting consideration for food business, maybe? And particularly worth noting if your core market is in that 35-49 age bracket.

Next up is 'beta-glucan'. 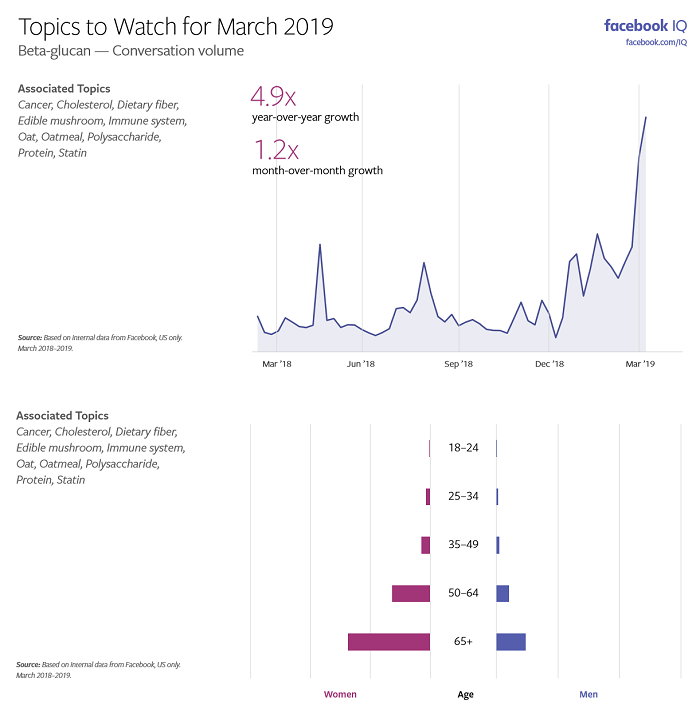 Beta-glucan is a type of fiber that's believed to reduce cholesterol, and can be found in various cereals and vegetables. Given its health benefits, more people looking at ways to introduce more beta-glucan into their diets - and definitely, going by the above charts, if you're looking to communicate with older groups, it should be a key consideration in your topics of focus. 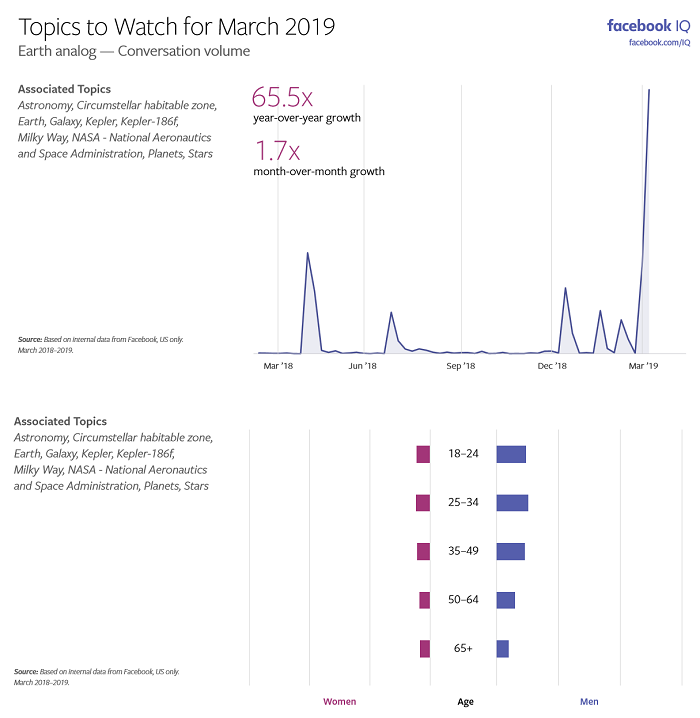 With climate change causing rising angst, perhaps more people are looking to the stars as a means of escape.

"Planets or moons with Earth-like environmental features, Earth analogs have recently been found across the universe. Many of these objects are in the habitable zone, meaning they're within the distance of their star to theoretically sustain life."

While the hype around space travel seems to have tempered down somewhat in recent times, it's clear that our fascination with the universe beyond is still strong.

The next one is a little more broad - 'medical research'. 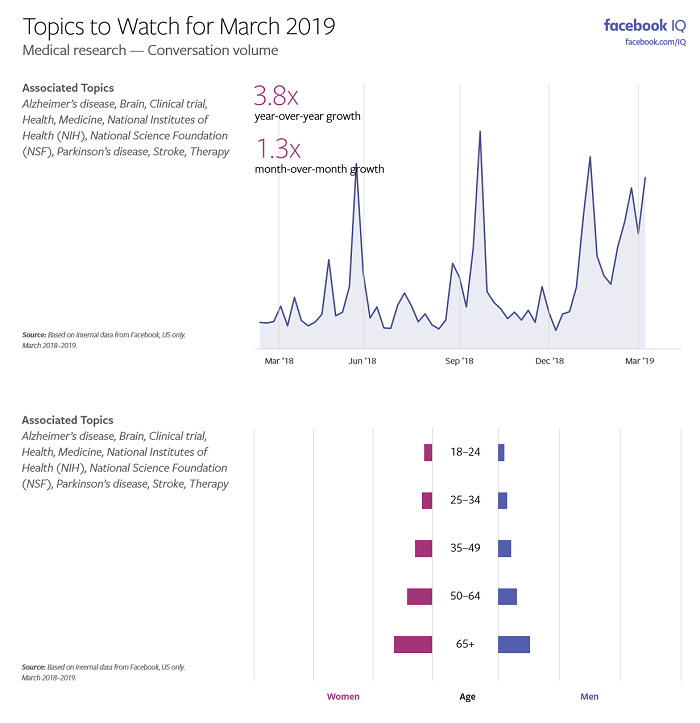 Advances in medical research, in various fields, have more people hoping for cures to some of the most common, devastating conditions.

Interestingly, much of the Facebook discussion focuses on practical steps which people can take to improve their chances of avoiding the same.

"Some of the latest treatments for major illnesses incorporate mind-body techniques, like meditation, mindfulness and yoga, as people and doctors alike think more holistically about health."

If your business operates in these areas, it's likely worth analyzing the latest medical research to keep your business audience informed of the potential benefits.

Another topic of interest - 'propylparaben'. 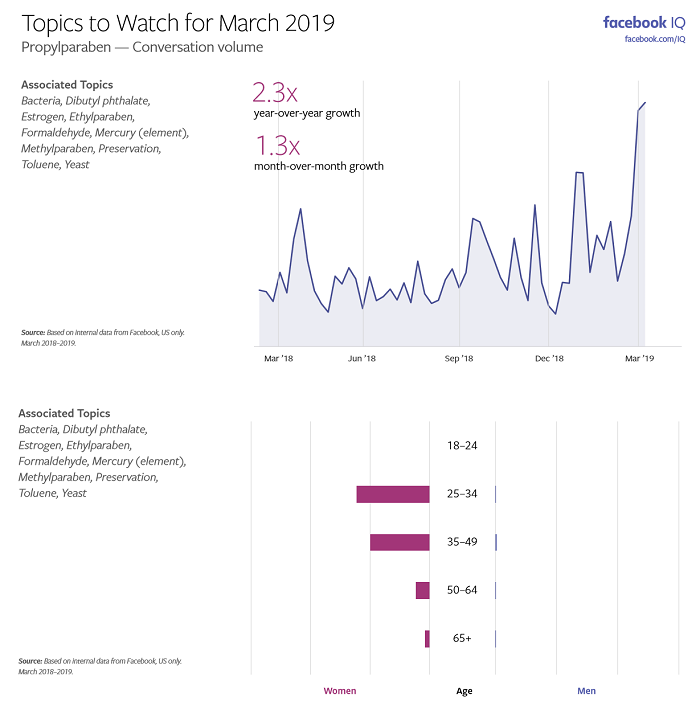 "Found in a range of personal-care products and cosmetics, propylparaben is a chemical that helps increase shelf life by preventing the growth of bacteria. People are increasingly wary of this chemical and other parabens, as some studies have shown a correlation between parabens and health conditions."

This could be a key point of focus for those brands that don't use such chemicals - with interest in the topic rising, now is the time to highlight the benefits of not using such.

And last on Facebook's list this month is 'urban exploration'. 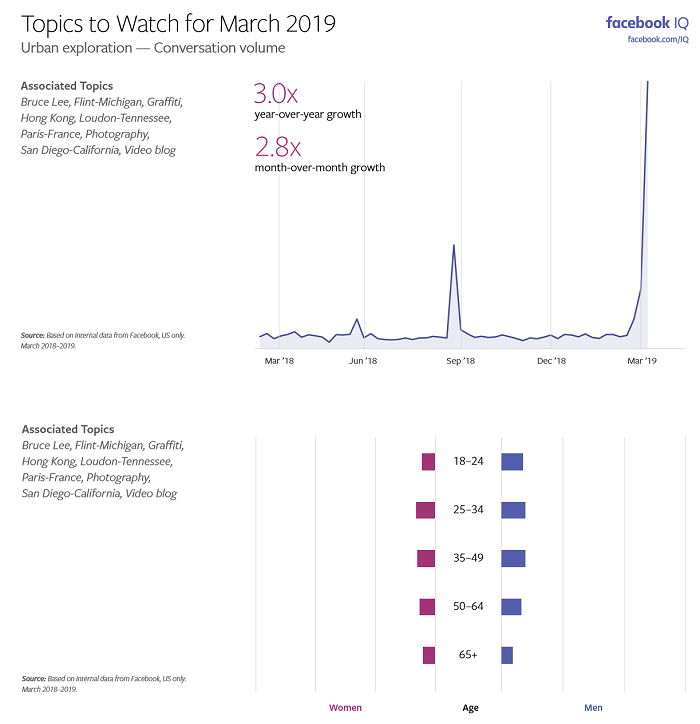 Urban exploration involves exploring vacant buildings and urban ruins around the world. Large communities have formed around the practice, sharing tips, maps and guides to help others in their discoveries.

This could provide a good opportunity for those selling outdoor gear - there are obviously legal considerations in such activities, and you don't want to encourage trespassing. But there may be ways to angle your marketing to promote your products for such purpose.

As always, Facebook's 'Topics to Watch' offer some interesting considerations for your marketing efforts, and they can be a great way to get ahead of the next big thing. Given the conversation stats listed above, these topics, and how they relate to your business, may well be worth further examination.