Facebook has announced a new initiative, in partnership with anti-discrimination charity Kick it Out, designed to tackle discrimination among UK football fans, and create a safer environment for everybody.

"Most football fans will have witnessed some form of discrimination in football – on the terraces, in dressing rooms or on social media – but rarely do fans feel they have the confidence to challenge it. Take A Stand is an action-led campaign centred around education and reporting, giving fans the information and the tools to call out discrimination both on and off line."

As part of this, Facebook's launched a new anti-discrimination toolkit, which is accessible through WhatsApp.

"By adding 07432 140 310 to your WhatsApp contacts, and messaging ‘hi’, fans will be sent a menu of educational content and resources from Kick it Out, The FA, HOPE Not Hate and other footballing partners. This service is an easily accessible way to learn more about tackling discrimination or the ways you can report it." 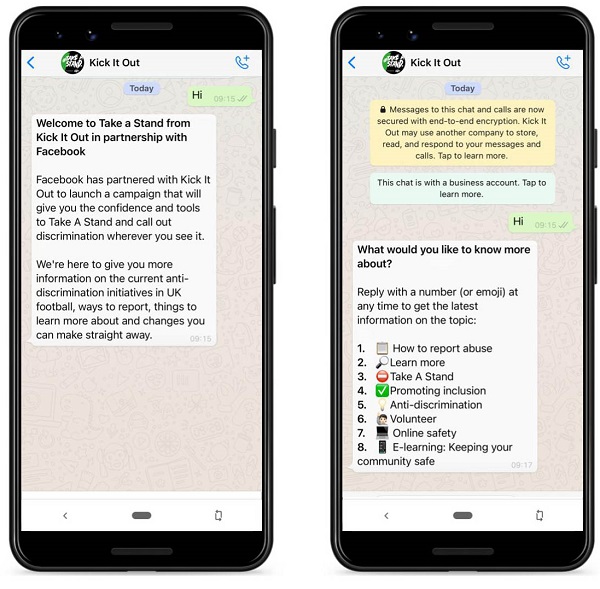 As you can see here, the process provides a range of options to help users challenge discrimination and anti-social behavior, along with an easy avenue to report concerns.

It's another element of Facebook's social good efforts, seeking to utilize the reach of its various tools to help facilitate real change, and empower users to act. And definitely, Facebook's tools can be used to improve real-world outcomes - though you would also think that there's a significant risk of misuse of such through false reports and misrepresentation.

Either way, it's good to see Facebook looking to take a stance on such, and provide a means for people to learn more about how they can address discrimination in a simple, non-confrontational way.

You can learn more about Facebook's 'Kick it Out' initiative here.