It's been in development for some time, and now, Facebook is launching its own variation of Bitmoji - called Facebook Avatars - which will provide users with an alternate, cartoonish identity, for use in a range of stickers and tools that can be applied across both Facebook and Messenger. 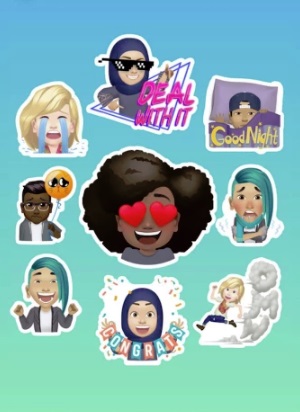 The process for creating your Facebook Avatar is simple - when the functionality is available to you, you'll see a different smiley face icon in your News Feed comment window or Messenger sticker chooser.

Tap on it and you'll be taken to a new creation flow where you can build your Facebook Avatar.

There are eighteen customizable categories for your character, including hair, clothing, facial features, etc. There's no option to scan in a real image and have the system come back with an approximation of you as yet, though that is another feature Facebook is developing. Facebook is also working on totally realistic - and kinda' creepy - avatars for VR, but the two functions are totally separate.

As you can see, the new avatars look very much like Bitmoji characters - something that Facebook's not shying away from.

“The notion of having digital representation has been around for a really long time. What we’re trying to do is this at scale.”

That's the same approach Facebook has taken with Stories - yes, Snapchat may have originated for format, but Facebook brought it to the masses. That's especially relevant when you consider markets beyond North America, where Facebook has reach, and many other tools do not.

Indeed, Facebook, which added 55 million more users in the most recent quarter, added 54 million of those outside the US, including 34 million in the Asia Pacific region. Many of these areas have not been able to access Snapchat or Bitmoji (which is owned by Snapchat), due to Snap's relatively narrow focus in expansion - which means that Facebook, despite being late to the game on both fronts, can gain first-mover advantage in many regions. When Snapchat does eventually expand, users will already have the same tools available via Facebook, where they'll also have established friend networks. So why switch to a new app?

So while, to many, it may seem like Facebook's missed the boat, that they should have launched a Bitmoji clone years ago, when the app was at its peak, there's still plenty of opportunity there - Facebook can still popularize the tool in many regions, and eventually, monetize the same through digital clothing additions and the like.

But there are no plans on that front as yet.

As noted by TechCrunch:

"Facebook won’t be monetizing Avatars directly, at least at first. There are no sponsored clothing options from fashion brands, or ways to buy fancy jewelry or other accessories for your mini-me. Facebook is open to the idea, though. “It would help personalize it for sure and from a business perspective that would be smart.”

In other words, you can expect to see sponsored clothing options in the near future, once the option is rolled out to everyone, which should come later this year or in early 2020. That could provide another opportunity for marketing via Facebook, which, depending on how popular the avatars are, could be significant.

And here's another wrinkle to Facebook's avatars that may see it get huge - Facebook is increasingly being used by older audiences, many of whom have not cottoned onto the popularity of Bitmoji. It may not be the cool angle, but don't be surprised to see your aunts and uncles suddenly posting stickers of their cartoon avatar everywhere, enamored by the novelty of a function younger users are already familiar with.

That, in itself, could be a significant opportunity - yes, Facebook has lost some of its cool factor with more older users slowly taking over the graph. But those older users are still a lucrative market, and their penchant for Minions memes alone would suggest that this similar feature could be a winner.

Late to the market - yes, but Facebook's Avatars could still be big time.

As noted, Facebook Avatars are currently only available to users in Australia, with a broader rollout planned for later this year or early 2020.