Facebook Launches 'Stars Fest' to Increase Creator Donations, and Bring More of their Fans to the App

With the holiday season approaching, people will have more time on their hands, and Facebook’s looking to use that opportunity to increase adoption of its Stars creator donation tool via a new ‘Stars Fest’ event.

Stars are essentially a virtual currency that can be purchased in various bundles, which then enables Facebook users to allocate them to creators via live-streams (audio and video). 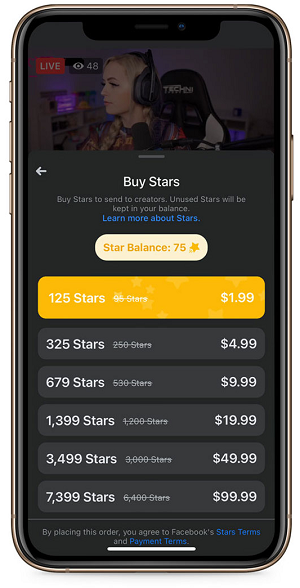 And from now on until December 31st, you’ll be able to purchase more Stars for less, with discounts on Stars packages, while Facebook’s also adding new Stars features and usage options to spark further interest in the tool.

The biggest functional addition, at least from a general user perspective, is the launch of a new Stars Store, “where people can buy Stars at lower prices”.

Which will also extend beyond the Stars Fest event, because by purchasing Stars through this new store, you’ll be buying them from Facebook direct, which will side-step app store fees.

“Stars are deposited into people’s virtual wallets to then send to eligible creators during Facebook Live, on-demand videos or Live Audio Rooms. In the Stars store, fans get more Stars for their money at lower prices, so they can support even more of their favorite creators.”

It’s the latest in Facebook’s ongoing effort to negate Apple’s charges, which it has publicly criticized on various occasions. Facebook also recently added a new process for fan subscriptions which re-directs potential subscribers to sign-up outside of the Facebook app, thereby subverting Apple’s 30% cut.

In addition to this, Facebook’s also looking to make Stars useable in more functions, including for videos in the News Feed, in Facebook Watch and within the Facebook Gaming tab.

As you can see here, soon, you’ll be able to allocate Stars to your favorite creators direct from the main feed, which will provide more monetization and support opportunities across the app.

The next step, then, will be Stars is Facebook Reels, which Facebook says that it will begin testing early in the new year.

If Facebook, and Meta more broadly, can implement a more equitable monetization pathway for short-form video creators, that could help to bring more stars across to its apps instead, which may help it fend off rising competition from TikTok.

Facebook’s also adding a new ‘Stars Party’ option, which will provide Stars fundraising goals when groups of people are viewing and donating in a live-stream.

“When a certain number of people send Stars during a livestream, a countdown timer will appear and the community has five minutes to hit a Stars goal together. If the goal is met, the screen is taken over by a shooting Star animation and a giant “Thank You” message. From December 22-January 3, creators will receive a bonus of $50 for every completed Stars Party.”

That could help to prompt more giving, with an added group incentive to donate Stars and achieve the goal – even if that goal is only an animation.

There’s also new Stars badges for top donators to add another competitive element to the process.

Facebook’s also launching a new ‘Stars Double bonus’ program which will see it match some creators’ Stars earnings through to March 31st, up to $750 a month.

“All in, creators could earn up to $3,750 in bonus payments. The program is invite-only and available in all markets where Stars is available.”

Facebook’s also giving away $3 million in free Stars to fans as another means to further boost awareness, and adoption, and increase its creator funding process.

And finally, there’s its Stars Fest programming, which will highlight a range of creator live-streams next week. 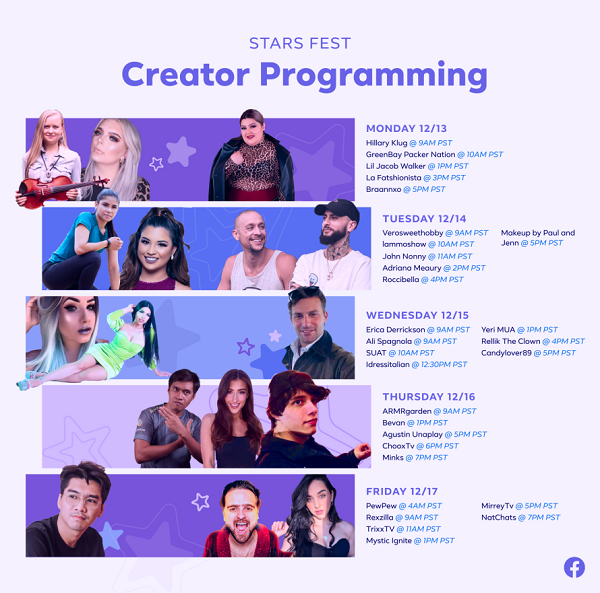 It’s a big, end-of-year push to encourage Stars usage, and again, to help fuel Facebook’s creator funding system, which will ideally help it to establish stronger bonds with top stars through expanded monetization and revenue potential.

Though it has a fight on its hands. TikTok is now the cool app, and the trending place to be, and it’ll be difficult for Facebook to change that perception, and re-gain its place as being where user and creator attention is focused.

In broader terms, this new push is part of Facebook’s expanded effort to win back young audiences, and with increased reach, and funding, there may well be an avenue for increased opportunity via Meta’s apps for young stars, if they can reach a comparable audience to what they’d see in other apps.

The eligibility restrictions for Stars do pose some challenges in this respect, but ideally, if Facebook can broaden Stars usage, and open it up to more creators, that will get more popular creators sharing more content to Facebook, which will also bring their audiences to the app with them.

There is potential here, and it’ll be interesting to see whether Stars Fest leads to a boost in take-up of the option.