Facebook has launched an updated version of its 'Access Your Information' tool, which aims to provide more transparency around the data that Facebook collects, and how it can be used to target you with ads. 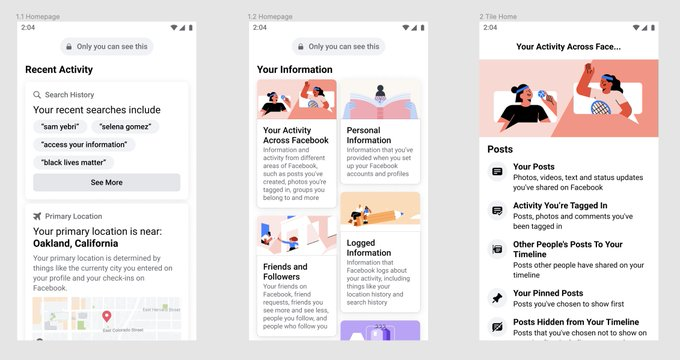 The refresh is likely a means for Facebook to get ahead of Apple's coming IDFA update, which will better inform iOS users, via direct pop-up notifications, as to the data being collected by each app they use. Though that's not exactly how Facebook is framing it.

"We first launched Access Your Information in 2018 so that people could have a central place to access their information on Facebook. Now that we’ve had some time to learn about how people use it, we’ve reorganized and given it a new coat of paint, so that it’s even more usable and transparent. We want to make sure that your information on Facebook is useful, easy to understand and easy to find."

As you can see in these images, the new format breaks down your personal data into several categories, as opposed just two ('Your Information' and 'Information About You') in its initial iteration.

The new categories are:

That gives users more ways to access specific insights on what data Facebook has on them - while helpfully, Facebook has also added a new search functionality to the tool so you can more easily find specific data categories and types.

There are also links to download your info, or delete any information that you don't want Facebook to track, making it easier to manage your personal data profile.

And then there's this:

"We are also adding information about how your data may be used to personalize your experience on Facebook. For example, you might see that your primary location was one of multiple signals that informed a recent ad you saw for a food delivery app. This information is already available in our Why Am I Seeing This tool, but we wanted to make it easier for people to discover."

Which seems like a more direct effort to get on the front foot ahead of the coming IDFA changes - though the value of the tool does depend on users actually checking it out, and looking through their personal data log. Which most probably won't bother with.

But then again, that's could be beside the point - by updating the tool, Facebook can now refer users to it as part of its response effort to the coming IDFA update. If it can get more people checking through this tool, and managing their data this way, rather than switching it off entirely, that could be a better outcome for its tracking.

Concerns around the personal data that Facebook collects, and how it uses such, has become a significant sticking point for many in recent months, both with the coming data transparency changes in iOS, which experts anticipate will see many switch off Facebook's data tracking tools, and with the recently announced changes to the way WhatsApp shares its data with Facebook, which has sparked a flood of users moving to other messaging apps.

Facebook has launched a large-scale ad campaign to oppose the IDFA update, while it's also now looking to reassure WhatsApp users that their data is safe. But it will likely need to attack these issues on various fronts. By providing more transparency tools like this, it will be hoping that it can alleviate concerns ahead of time, and better explain to Facebook users why they don't want to switch off data tracking, even if they can.

That probably won't work, and it's hard to say how significant the impact will be for WhatsApp. But this update will be one of several measures Facebook will launch in the coming weeks as it seeks to get ahead of the IDFA update, and keep people calm about its various data collection processes.