With gaming seeing a big rise in 2020, and gaming on Facebook, specifically, gaining traction, The Social Network has today launched a new set of cloud-streamed games, which will enable users on Android and the web to play instantly, with no downloads required.

"Today we’re announcing that Facebook Gaming has launched several cloud-streamed games in the Facebook app and on browser - playable instantly, with no downloads required. Cloud game streaming promises to deliver unprecedented access to games across every screen. And while we’re thrilled to play a part in that future, that future is a ways off."

That future is still a way off, in part, because of Facebook's ongoing negotiations with Apple over the availability of games within its dedicated Facebook Gaming app.

Back in August, as part of the release of its new gaming platform, Facebook noted that it had been forced to remove some functionality from the iOS version due to App Store regulations, with Apple refusing to approve the app with mini-games included. Essentially, because Facebook Gaming facilitates both watching gaming content and playing games, it falls in between Apple's classifications, and can't be approved with both functions.

Facebook has strongly criticized Apple's stance, and as noted, remains in negotiation over a possible return to full functionality on iOS. But at this stage, Facebook is only able to add its new cloud gaming options on Android and via the web. It's cloud games are also only being released in the US in the initial release.

For those able to access the new cloud games, there's a range of option on offer:

Cloud gaming essentially enables users to jump in straight away, which could be a good way to get more users engaged with Facebook Gaming content.

As noted, Facebook's gaming options have seen a significant boost in interest in 2020, with Facebook now seeing some 380 million people playing games on the platform every month. Recent data from StreamLabs also showed that Facebook Gaming surpassed 1 billion hours watched for the first time in Q3, while the company's also looking to the next phase of gaming, in VR, which has also seen a rise in interest of late.

Incidentally, Facebook also released a new report on shifting behaviors during COVID-19 today, which showed that free gaming is seeing a big boost as people look for new ways to interact. 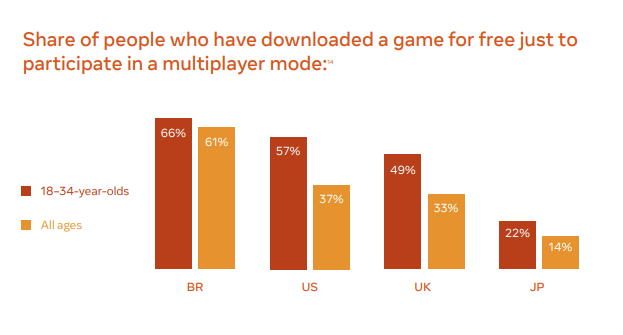 Facebook's new cloud games will provide another means for it to cater to this demand - and despite the games not being available on iOS, they could prove to be a popular addition, boosting its gaming potential.

Facebook's cloud games will initially be available for free, but will include in-game purchases and ads. Facebook plans to expand its games from there, which could include bigger, paid games and options in future.

Facebook's cloud games are available in the US from today, with more regions to follow. US users can check out the latest games on the Facebook app on Android and on web at fb.gg/play.