Facebook has announced a new set of brand safety controls, which will give brands more control over their ad placements across Facebook's various ad streams.

The new options have been in testing with selected partners over the last few months - back in November, Facebook outlined a range of coming options designed to better enable advertisers to control where their ads appear across Facebook's various ad delivery networks.

The main element here is the expansion of whitelists, both for Audience Network and in-stream ads. Whitelists enable advertisers to select specific publishers and content types against which their ads can be shown - as opposed to block lists, which eliminate certain placements outright.

As per Facebook, advertisers will now be able to utilize:

In addition to these features, Facebook's also rolling out an updated ad delivery report, which will include impression data at both publisher and content levels, providing more transparency into which individual pieces of content your ads have been embedded.

That could be particularly relevant for live-stream ads as that option expands, providing more specific context as to which streams, and streamers, your brand is appearing with.

The new tools are now available in the Brand Safety Controls interface within Business Manager, which Facebook has also redesigned in order to better present your ad accounts, along with the status of their relative brand safety controls. 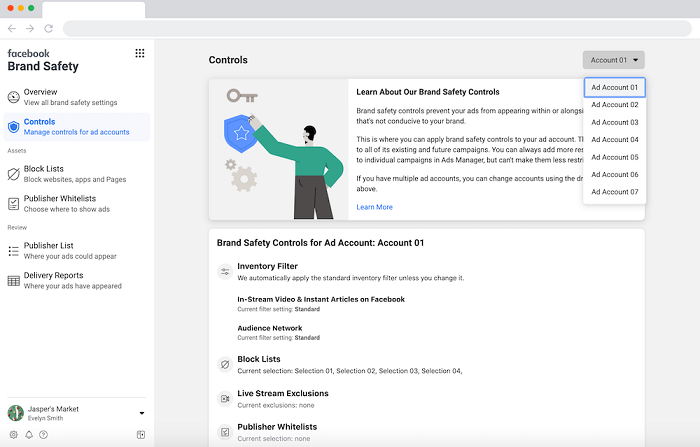 Facebook's also added a new controls page to make it easier to apply the various brand safety settings, which includes an inventory filter at the account level. As you can see at the right hand side of the above screenshot, you can also manage block lists and publisher lists from the same surface.

The issue of brand placement became a major focus back in 2017 when YouTube lost millions of dollars in revenue after several big brands pulled their YouTube spend over concerns that their ads were appearing alongside extremist content and hate speech. Facebook has been working to improve its placement options, alongside other digital providers, ever since, and these new list options will provide more specific ways to control placements, and avoid unwanted association.

You can read more about the whitelist and placement updates here.