Over the past couple of months, Facebook has been sharing a weekly series of insights into its various video tools via interviews with the Facebook staff who are working on them, which has provided some new and valuable perspective into why they've added each function and what needs it can serve.

The latest video in the series, published this week, looks at video Playlists and Series, and how each option can help video creators maximize their exposure and viewership in different ways.

The video goes through the difference between the Playlist and Series options, and why the options were created:

"Facebook Watch is a video destination and as Facebook Watch continues to grow, we actually really wanted to focus on making publishing videos on Facebook way more flexible than it ever has been before, and with that, we wanted to create powerful new ways to publish, organize and drive discovery around your content. Playlists and Series is a way to do that, and a content format type to enable three things - organizing videos, driving discovery, and publishing content."

Facebook also provides further definition as to the purpose of each option:

Facebook says that the difference between the two options is that, if you're content counts as episodes in a set, then its a Series, but if you're doing tutorials and thematic content that doesn't necessarily fit into a traditional TV series format, but can be grouped together, then Playlist is a better option.

So why should creators use these options?

Well, aside from helping to guide viewers through your series' and sets in sequential order, Facebook also notes that grouping your content can increase engagement by keeping people looking through more content that you've created.

In addition to this, Facebook notes that when you organize your content into themes and topics, you increase your chances of being found in related searches.

Facebook also notes that Playlists and Series each have a unique URL, which can help you drive more viewership for your collections by directing your audience to your video collections.

Creators can build Playlists and Series in Creator Studio, with specific options in the Content Library tools. 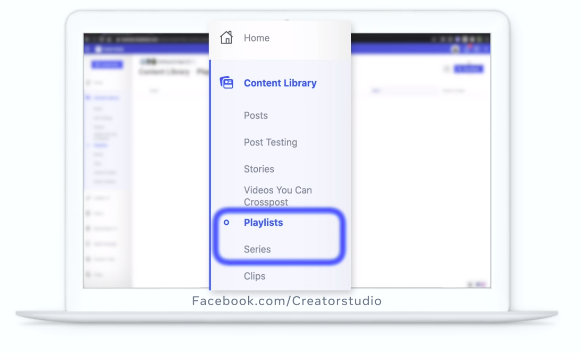 Creators can also add their videos to an existing Playlist or Series at the upload stage within Facebook, which also applies to bulk uploads.

It's not a revolutionary function that will suddenly bring you millions more views guaranteed, but with Facebook looking to emphasize Facebook Watch, and keep people coming back to its video platform, Playlists and Series can play a key role in maximizing engagement, and aligning with how Facebook looks to promote its unique video content.

If you have enough videos in a certain theme, it's worth considering both options, and testing to see whether they help increase viewership.