Facebook Rolls Out Messenger 'Unsend' Feature to All Users

Almost a year after first announcing it, Facebook is now rolling out its 'unsend' message option in Messenger to all users, providing a way to retract previously sent Messenger communications within a 10-minute window. 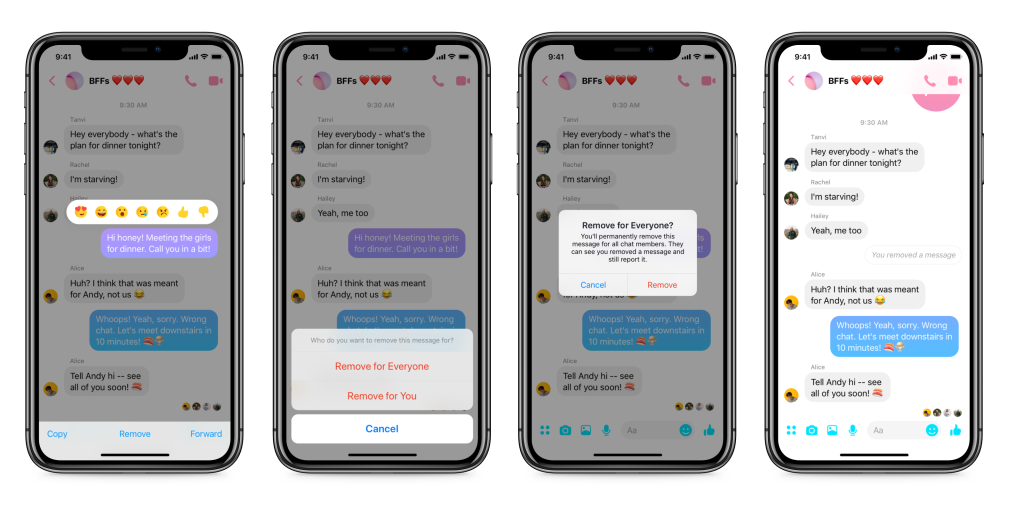 The process is fairly straight-forward - as explained by Facebook:

"Simply tap on the message you want to remove and select the option to “Remove for Everyone”. The removed message will be replaced by text alerting everyone in the conversation the message was removed. You will have up to 10 minutes to remove a message after it is sent."

As noted, Facebook first announced the option last April, after senior executives at the company got caught out when some tech journalists noticed that previously received messages from them had mysteriously disappeared from their Messenger inboxes. Facebook then sought to save face by announcing that, soon, all users would be able to retract their Messenger messages too - but it took them another seven months to reveal any further action on this front (which, skeptics might suggest, shows that this was never really in the works and that Facebook merely made the announcement then had to catch up).

In November, Facebook rolled out the 'unsend' option to Messenger users in Poland, Bolivia, Colombia, and Lithuania, and now, after initial feedback and testing, it's coming to everyone. Facebook's official announcement is brief and to the point, and the feature is now out there. Done, released, they did what they said they would. What more do you want?

It does appear to be one of the more rushed Facebook announcements, with little joy or enthusiasm between the lines. This, again, could reiterate that the feature was never intended for a broad roll-out, but when the company's own executives were caught out, what else could Facebook do?

Either way, it's another option to help you manage your Messenger interactions, and there'll no doubt be times where it will come in handy. Just remember, you've only got 10 minutes - which, incidentally, is the kind of time frame Twitter CEO Jack Dorsey is investigating in regards to a potential editing option for tweets.

Maybe this tool could form the template, and lead to a new habitual process in broader social communications.