Facebook has this week published its Coordinated Inauthentic Behavior report for April, which outlines all of the accounts, pages and groups that the platform has removed over the course of the month due to identified efforts to mislead and misinform Facebook uses for varying purpose.

Facebook also notes that many of these groups have sought to use COVID-19 to push their various agendas:

"All of the networks we took down for CIB in April were created before the COVID-19 pandemic began, however, we’ve seen people behind these campaigns opportunistically use coronavirus-related posts among many other topics to build an audience and drive people to their Pages or off-platform sites. The majority of the networks we took down this month were still trying to grow their audience or had a large portion of engagement on their Pages generated by their own accounts."

The detection and removal numbers in Facebook's CIB reports have varied significantly in the three months its been publishing its collective updates, making it difficult to get a true measure of how much Facebook's systems are improving in this respect - though it is interesting to note the uptick in removals from Facebook, specifically, this time around. 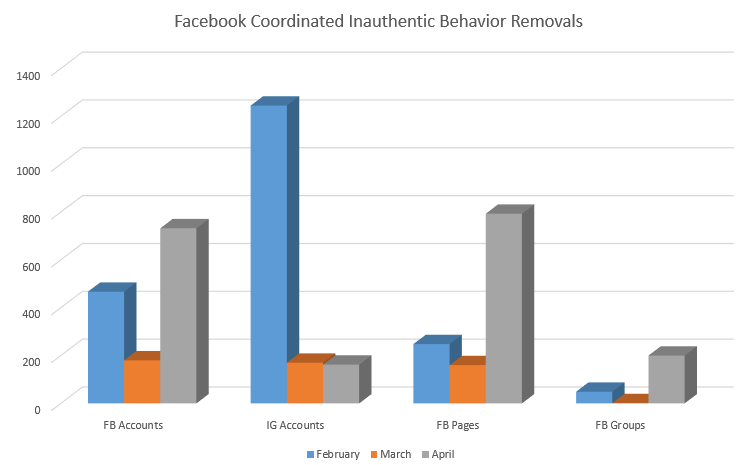 Many would likely expect to see such activity ramping up as we get closer to the US election, and that may be what we are seeing - the data here shows that while Facebook is steadily removing fewer Instagram accounts for such activity, more Facebook accounts, Pages and groups have been detected of late.

But then again, there's not a heap of data to go on, and given the significant shifts thus far, it may not be indicative of a trend. But still, it'll be interesting to note where Facebook finds more of this activity in the months ahead, and whether Facebook does indeed become a bigger focus for those seeking to influence voter action.

You can read the full Facebook Coordinated Inauthentic Behavior report for April here.