It’s interesting that at a time when Facebook is being accused of favoring its own growth over the public good, when it’s being scrutinized over the ways in which it facilitates the amplification of misinformation. It’s interesting that, amid all of this, the platform is still testing new options that would essentially enable exactly this type of behavior. 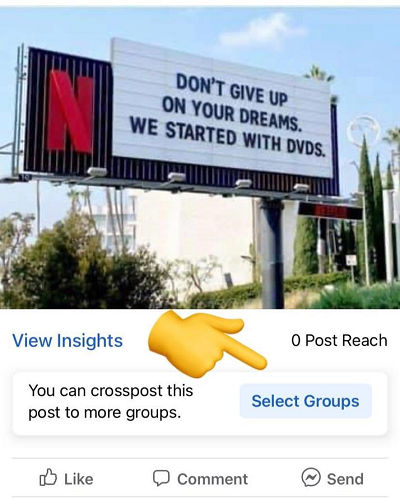 As you can see in this screenshot (shared by Matt Navarra), the new option would enable Facebook users to crosspost an update into multiple groups that they’re a member of, which would facilitate more streamlined sharing, and ideally, for Facebook at least, get more people sharing more content into more groups, more often.

But isn’t that the exact behavior that WhatsApp sought to limit last year, when it implemented new restrictions on how many times messages can be re-shared by users?

In January last year, WhatsApp limited message sharing to five times per message, in order to stem the flow of misinformation in its app - specifically COVID conspiracy content. WhatsApp later implemented even more stringent measures on message forwarding, as it sought to limit the capacity for misuse of its network.

And WhatsApp says that approach has been very effective:

“Since putting into place the new limit, globally, there has been a 70% reduction in the number of highly forwarded messages sent on WhatsApp. This change is helping keep WhatsApp a place for personal and private conversations."

So Facebook-owned WhatsApp has essentially acknowledged that putting a limit on how many times a message can be forwarded, especially into group chats, can have a big impact on reducing the spread of misinformation. Yet, it’s now looking to facilitate that specific functionality on Facebook?

It seems like a conflict, which also aligns with Facebook whistleblower Frances Haugen’s view that the company will choose to “optimize for its own interests, like making more money” over the public good.

I mean, it’s a smaller example, sure, and there is no doubt some benefit to being able to share a Facebook post into multiple groups at once, especially if you’re highly engaged with a specific topic or interest, and active in various communities.

But still, it seems like an odd test, given the WhatsApp example.

Either way, it appears that Facebook is testing it. We’ve asked Facebook for more info on the experiment and we’ll update this post if/when we hear back.