They’re not AR-enabled, and they don’t feature Facebook branding, but today we’ve been given our first look at The Social Network’s new smart glasses, made in partnership with Ray Ban, which come in a range of fashionable styles that largely disguise the fact that you could be recording everything that you see.

The glasses, called Ray Ban ‘Stories’ (yep, even sunglass makers are now getting into Stories), largely achieve their key intention upfront, in being a fashionable looking wearable device - because as Google Glass showed us, if your smart glasses look too nerdy, no matter how functional they are, nobody’s going to wear them.

The glasses are available in three styles, each based on traditional Ray Ban designs, including the ever-popular ‘Wayfarer’, one of the only sunglass styles that looks good on almost anybody. 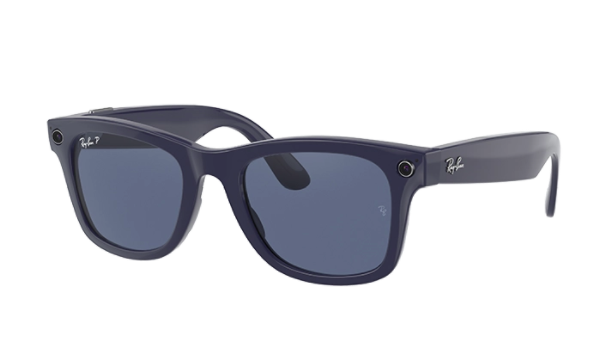 Under the hood - or more operatively, built into the frame - Facebook has developed a new multi-camera hub which enables the user to record what they’re seeing at any given time. You simply tap the button on the top of the arm, and the recording begins, providing an easy way to capture your experiences, without taking you out of the moment.

Which is just like Snapchat’s Spectacles, which Snap released, oh, about 5 years back.

So given that you’ve been able to purchase pretty much the exact same device for some time, what makes Facebook’s variation stand out, and will get consumers to fork out their hard-earned cash to own a pair?

First, the technology is better. Ray Ban Stories include dual 5-megapixel cameras, which is around double the resolution of the latest version of Spectacles. That will ensure your captured visuals look their best, while the device also benefits from Facebook’s advanced capture stabilization tech, providing another means to maximize your content.

Facebook has also added open ear speakers into its device, so you can listen to music, or take phone calls through your glasses, a major bonus, while Facebook’s also made it possible to activate glasses capture via voice command. There’s also in-built storage, with the capacity to save up to 30 videos or 500 photos on the device, which you can then download to a companion app. 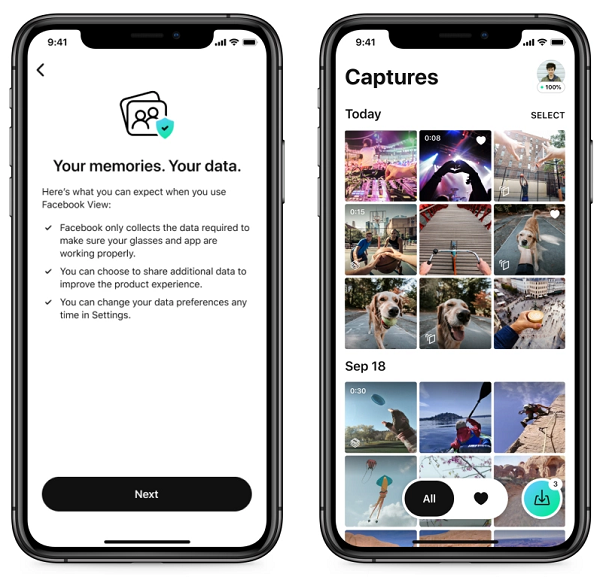 Those are all valuable upgrades, but really, the key draw is that they’re better looking, while they also easily integrate with Facebook, which is used by about 6.5x as many people as Snapchat.

Connection to Instagram is also relevant in this context, particularly as it relates to Instagram Stories, while you can also bet that Facebook will look to add a heap more features and tools to help encourage Ray Ban Stories usage, and boost take-up of the device.

But it’ll be interesting to see how Facebook goes about its marketing effort here. Given the company’s checkered history on data privacy, you can imagine that many people will be hesitant to add a Facebook-connected camera to their face, while onlookers will no doubt be squinting suspiciously at those wearing the new glasses, ready to pounce on potentially unlawful capture of their image (note: Facebook has also added external LEDs to indicate when a user is recording through the glasses).

There’ll also be whole new conspiracy theories around users being targeted with ads on Facebook based on things that they’ve seen. Given all the expected angles, you would imagine that Facebook has mapped out ways to counter the likely pushback, which could limit adoption, and impede development.

In this respect, Facebook has likely learned some key lessons from its first big consumer hardware push for its Portal smart speaker device. At launch, many people proudly proclaimed that they would never bring a Facebook-connected camera into their home, while several reviewers and privacy advocates outright stated that ‘nobody should buy this device’ because of the Cambridge Analytica scandal and Facebook’s overall approach to data safety.

Yet, even so, even though it took a little while to weather that initial storm, sales of Facebook’s Portal camera have steadily climbed, boosted by the pandemic, and the increased interest in video connection, but also through smart initiatives by the Facebook team - like providing free Portals to nursing homes to help keep residents connected to their families.

Over time, utility always trumps privacy concerns - but the question then is what utility do Facebook’s smart glasses truly bring, and how can it similarly boost take-up, and reduce hesitancy, by aligning with key use cases?

There’s not a huge need to have a camera-enabled device linked to your perspective, or a means to take phone calls on your face, especially given that we already have smartphones that facilitate the same. Sure, there’s that extra effort of having to actually lift your phone up to eye level, but is that minor inconvenience enough for people to fork out $299 for a new device?

Maybe Facebook’s key pitch will be to people buying new glasses - if you’re going to spend X amount on sunglasses anyway, why not get these, with additional features included?

But even then, if Facebook’s ultimate plan, as it’s stated, is to bring out another version of the device in future, with full AR overlay capability, why would people spend now on the inferior version, when you can just keep your money till the use case is more compelling?

That would also mean that you could pick up a pair of Apple or Snap AR glasses instead, if they beat Facebook to the punch. Given the various considerations, it’s hard to see Ray Ban Stories bring a massive hit at this stage, and reaching beyond the tech fanboy/girl market.

But as noted, maybe Zuck and Co have a plan. Maybe, this first iteration is simply part of the development process, and will help Facebook measure demand and interest, before investing in the next shift, or maybe it’s just about stabilizing its supply chains and getting moving on another hardware offering before it advances to a full AR device.

It’s not clear, at this stage, the path that Facebook is mapping, nor how quickly it’ll be able to move into a full AR device. But it’s taking the leap, it’s moving into smart glasses, which will eventually evolve into its AR companion tool.

That’s a major jump, and maybe, this is the only way Facebook can take it, by skipping to the next stone in the pond, rather than aiming to make the bank in one leap.

Ray Ban Stories are available from today, via the Ray Ban store online and in retail stores in the US, Ireland, Canada, the UK, Italy and Australia. The glasses will also be made available in more regions soon.