Given the focus on vanity in social media, and showcasing a highlight reel of your life via your public posts, it's no surprise that miracle cures for weight loss, baldness and other physical conditions run rife in ads across the various networks.

This has long been a problem for Facebook, and in many ways, a consequence of its scale. Back in 2013, Jezebel published a post which looked at some of the worst Facebook ads, and among them were these weight loss 'cures'. 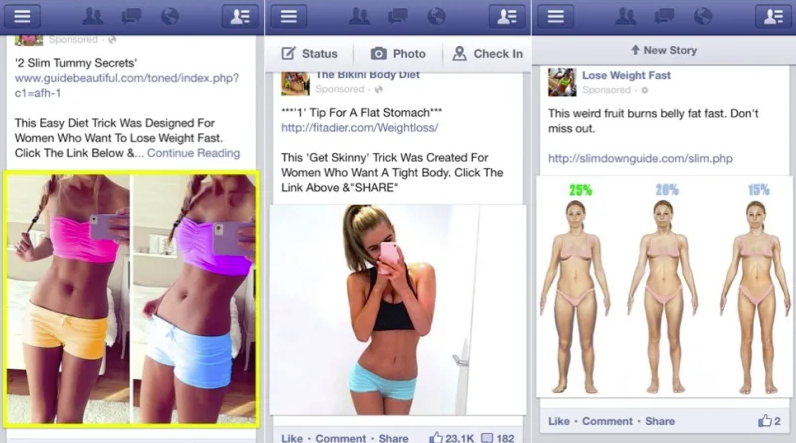 Such ads are misleading, false, and prey on vulnerable users. And now, Facebook's taking action against them, with two new News Feed algorithm updates designed to reduce the reach of ads that promote miracle health claims.

"Last month we made two ranking updates to reduce the reach of posts with exaggerated or sensational health claims and posts attempting to sell products or services based on health-related claims. For the first update, we consider if a post about health exaggerates or misleads - for example, making a sensational claim about a miracle cure.  For the second, we consider if a post promotes a product or service based on a health-related claim - for example, promoting a medication or pill claiming to help you lose weight."

The update is a good one for Facebook - with more and more people relying on The Social Network for their news distribution and information needs, confusing, false claims like these can only make matters worse, and such claims are detectable by Facebook's systems.

"We've handled this in a similar way to how we’ve previously reduced low-quality content like clickbait: by identifying phrases that are commonly used in these posts to predict which might include sensational health claims or promotion of products with health-related claims, and then showing these lower in News Feed."

This, in combination with Facebook's previously outlined update to reduce the reach of anti-vax content, could go a significant way towards removing such posts from people's feeds, and lessening their influence on the world's most popular social media platform.

And again, it's that scale that's both Facebook's strength and weakness. Obviously, having the most popular social app in the world is of benefit, but as Facebook has repeatedly been made aware of, it also comes with a higher level of responsibility to police information flow, and protect users who may not even realize they need protecting. That, in many ways, goes against the principles of Facebook and other social networks, in that they would prefer to be havens of free speech, where the users themselves dictate what is and is not acceptable. But as we've seen, that's not exactly how it works in practice - a 'free for all' platform facilitates both the best and worst of humanity, and the consequences of such can be disastrous.

While Facebook would prefer to be more hands-off with content of this type, it simply can't, and as such, you can expect The Social Network to continue to roll out updates like this which will reduce the reach of concerning, questionable posts and ads.

You can read Facebook's full explanation of the update here.