With COVID-19 cases spiking once again in several regions, Facebook is launching two new initiatives to help boost awareness of preventative measures, and dispel some of the pervading myths about the virus.

First off, Facebook is expanding its top of feed alerts, in both Facebook and Instagram, which will remind people to wear masks when out in public. 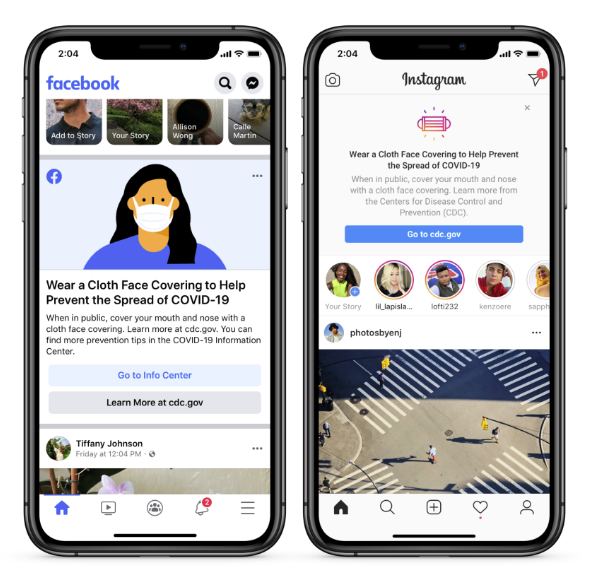 Facebook launched the mask prompts in the US earlier this month, but now, the same will be displayed in more regions.

There are several reasons - some relate to the availability of masks in certain regions, and limiting demand to ensure essential workers are able to get what they need. Others relate to complacency - research has shown that some people who wear masks put too much faith in the mask's capacity to stop the spread of the virus, and therefore they ignore other, more effective measures, like maintaining social distancing.

That said, wearing a mask, in most cases, is better, but it will be interesting to see how Facebook manages the roll-out of these alerts, and whether it coordinates with local health authorities to ensure it's not contradicting official advice.

In addition to this, Facebook is also adding a new 'Facts About COVID-19' section to its COVID-19 Information Center, which will look to clarify some of the false rumors circulating about the virus. 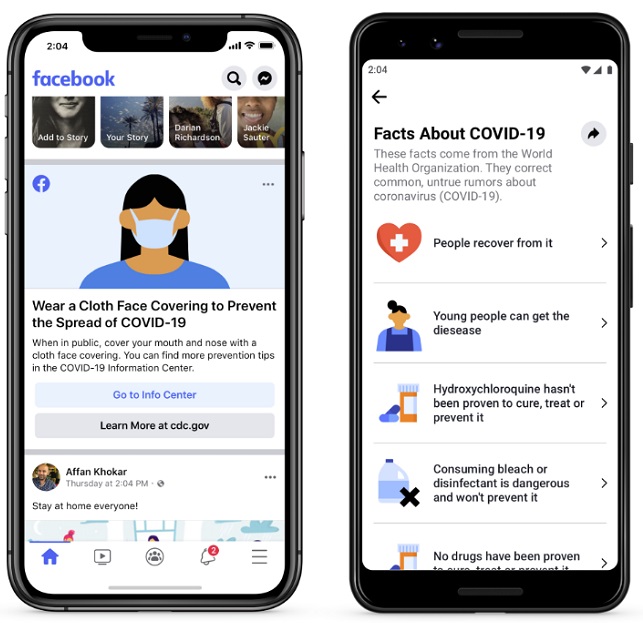 Note the specific mention of hydroxychloroquine in the screenshot above - hydroxychloroquine, which is used to treat malaria, has been repeatedly touted by US President Donald Trump as a potential cure for COVID-19, despite medical evidence suggesting that it's not effective. There has been some debate on this, but the official advice is that it's not a cure in any way, and the fact that Trump has continued to push the idea that it can be used as a treatment has, at least in some part, provided a false sense of security to some people who have been looking for a treatment.

This, in itself, highlights the dangers of sharing unproven treatments, and the President, in particular, questioning medical authorities. With several world leaders playing down the dangers of the virus, and the effectiveness of measures like face masks, that then adds extra weight to rumors and myths about how the treat the virus. That, in turn, has played a part in people ignoring health directives, which, as we're now seeing, has lead to a new rise in case numbers across the world.

As such, it's important to ensure as many people as possible are aware of the official health advice, and Facebook is hoping that it can use its massive audience reach to better amplify such guidance and quash some of the misunderstandings.

Indeed, Facebook also says that over two billion people have used its COVID-19 information center, with 600 million of them tapping through on health information to learn more from official sources. That, once again, underlines the significant role Facebook can play in disseminating information - and while Facebook's reach can equally be used in the opposite manner, in spreading misinformation, and dis-information on the same, Facebook's hoping that these new, official measures, along with its efforts to remove false COVID-19 updates, will have a positive impact on raising awareness.

In addition to this, Facebook CEO Mark Zuckerberg is interviewing US infectious disease expert Dr. Anthony Fauci on a live-stream tomorrow to discuss the US response to the outbreak.