As the COVID-19 pandemic expands across the globe, various misinformation campaigns - promoting everything from 'cures' to rumored government actions - have also gained traction, with messaging apps, in particular, becoming a key tool in circulating such reports.

In the past, Facebook has been the key focus for misinformation efforts due to its massive audience reach, but now, with Facebook instituting more measures to remove and detect such, and messaging platforms providing more private means to reach similarly large audiences, the emphasis appears to have shifted. That's lead various government groups to call for increased action, and now, Facebook is looking at new ways to stem the flow of messaging misinformation in order to halt damaging movements before they gain traction.

This week, as reported by TechCrunch, Facebook-owned WhatsApp has confirmed that it's looking to launch a new feature which will enable its users to immediately search for additional context on a message via a Google search prompt in-stream. 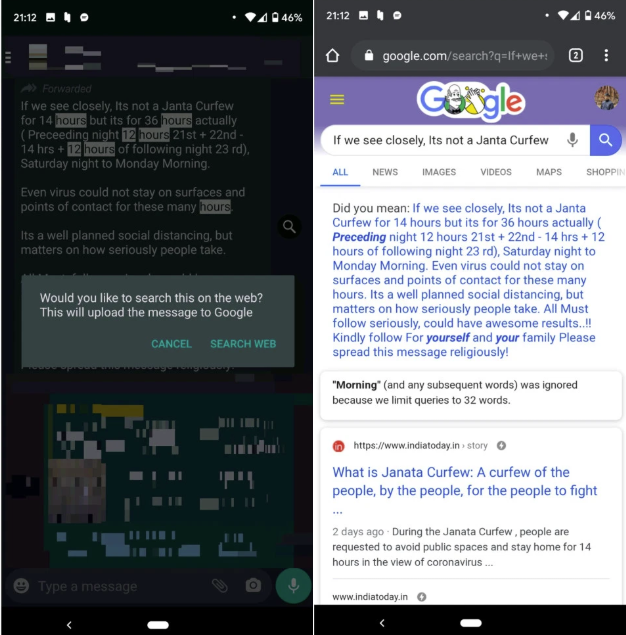 The option will make it easier for users to dispel misinformation by looking at what else is being discussed, and what other reports have been shared relating to the same.

This comes in addition to WhatsApp's recently launched World Health Organization chatbot, which provides another avenue to access official information, while WhatsApp also now has a dedicated COVID-19 information hub to provide timely updates and info to users.

It also comes as more people are turning to WhatsApp for information. Last week Facebook CEO Mark Zuckerberg noted that user traffic through both WhatsApp and Messenger were “at more than double their usual levels” amid the pandemic.

Consequently, Messenger is also seeing an increase in misinformation campaigns - and on that front, Facebook is also testing out a new limit on how many group chats a message can be forwarded into in Messenger, similar to what's already in place on WhatsApp.

Facebook Messenger is working on limiting the amount of threads a message can be forwarded at a time, in order to add frictions on misinformation pic.twitter.com/qRZcE0t4w6

That restricts a users' capacity to mass-share information quickly, helping to limit the spread of hoax reports. The measure has proved beneficial on WhatsApp, and in a time of possibly the greatest need for accurate, relevant information, it makes sense for Facebook to be looking to extend the same into its other major messaging platform.

It's frightening to consider the potential impacts of fake information amid the COVID-19 pandemic. Some of the false advice shared has included claims like "walking outside is enough to disinfect you”, "washing your hands is propaganda for soap companies", or even worse: “drinking bleach and ingesting colloidal silver will cure COVID-19.” Again, the need for accurate, timely, relevant information is probably higher than it's even been with respect to prompting people to take precautionary action, and limit the spread of the virus.

As such, it's important that Facebook is looking to take action, and limit such impacts wherever it can.