Facebook CEO Mark Zuckerberg recently said that he believes the Stories format, originated from Snapchat, is now on its way to becoming the key way we share content on social, overtaking the current staple, the News Feed.

Google’s latest announcement certainly supports this – at their AMP Conf in Amsterdam, Google has announced that Accelerated Mobile Pages will soon be available in a new Stories format.

The new AMP stories will start appearing in Google search results over time, providing another way for publishers to share their content, and tapping into the growing Stories trend.

That could have various implications for content creators and publishers – for one, the acknowledgment from both Google and Facebook (the biggest drivers of referral traffic on the web) that Stories are a key option moving forward could lead to wider adoption of Stories overall, making it an even more significant consideration in all aspects.

In other words, if you’re not familiar with Stories and their potential benefits for your business yet, it may be time to start framing their potential within your wider digital strategy.

The addition of AMP Stories could also have an impact on both Instagram and Snapchat by potentially taking ad revenue away, especially if Google looks to push their Stories option to more users (why advertise on Snapchat Stories when you can reach a much bigger audience on Google?). But then again, as noted by TechCrunch, such a push could also have benefits, as it could further familiarize users with Stories, leading to even more usage on all platforms.

It’s one of several AMP-related updates announced this week – in addition to this, Google's also rolling out ‘AMP for Gmail’ which will ‘enable developers to create more engaging, interactive, and actionable email experiences’.

“For example, imagine you could complete tasks directly in email. With AMP for Email, you’ll be able to quickly take actions like submit an RSVP to an event, schedule an appointment, or fill out a questionnaire right from the email message. AMP for Email will also make it possible for information to easily kept up-to-date, so emails never get stale and the content is accurate when a user looks at it.”

It’s an interesting option, which opens up a range of possibilities, and will no doubt prove popular.

This also comes as Facebook moves to improve its AMP-like offering, Instant Articles, with the addition of paywalls which will provide publishers with 100% of the subscription revenue. 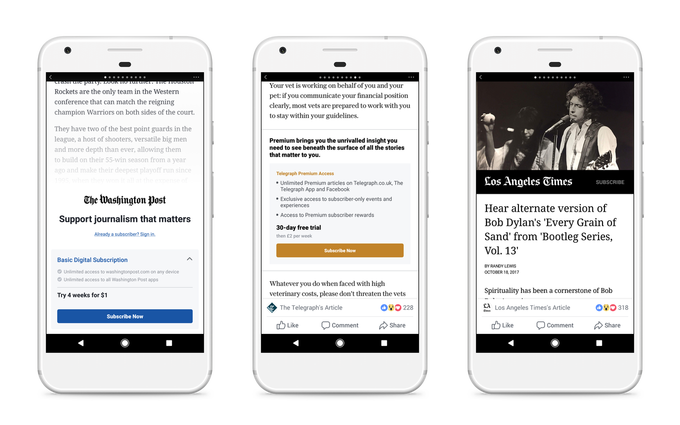 The paywalls will kick in after five articles, and will provide another way for publishers to monetize their Instant Articles content, which could make it a more attractive option.

Given the relatively lukewarm response to both AMP and Instant Articles thus far – both from publishers and readers (though mostly from publishers) – it’s difficult to know how effective or valuable these new options will be, but they definitely open up a range of additional considerations, and could motivate a new shift towards more responsive, interactive content.

And as noted, that could have much wider implications, particularly in terms of habitual behavior. If such options become the expectation, your digital strategies will need to evolve in-step.