The 90th Academy Awards will be announced tonight, and as always, social media will be flooded with real-time updates, predictions and commentary on every aspect – from the films to the fashions and more.

But can social media data predict Oscar winners – and more importantly, can that help you in your pool against your friends?

We’ve been provided with a range of predictions based on mention volume – here’s where the social data suggests the trophies will go this evening.

According to Twitter data, ‘Call Me by Your Name’ leads in Twitter mentions since the nominations announcement. 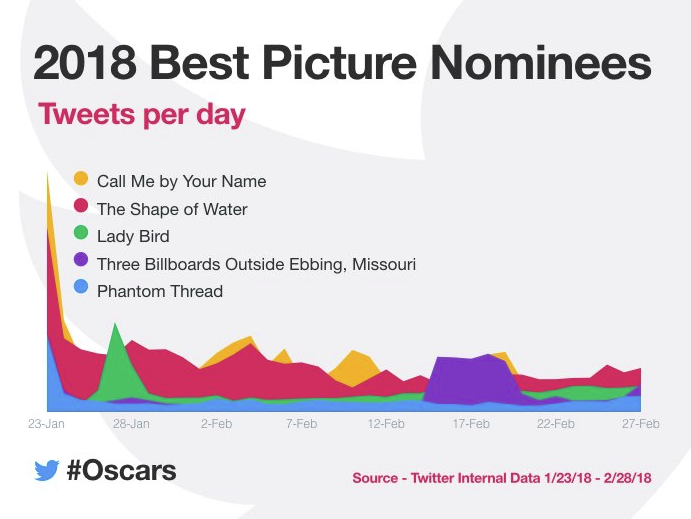 Does that mean it’s more likely to win? It’s obviously hard to say - mention volume alone doesn’t necessarily influence Academy judges. But then again, mention volume has been cited by various academic studies as the leading factor in predicting election outcomes via tweet.

The popularity of ‘Call Me by Your Name’ is also supported by data from social analytics company Shareablee, which found that the film has seen the most engagement of the nominees on Instagram in particular.

(Shareablee does note, however, that the popularity of ‘Dunkirk’ could be tied to its heavy social media promotion on release, not the film’s popularity. Take from that what you will.)

Sprout Social’s insights also point to ‘Call Me by Your Name’, with the film seeing both the most mentions overall, and the most positive mentions, according to their sentiment tracking data – with ‘The Shape of Water’ coming in second.

Call Me By Your Name

The Shape of Water

The safe bet would seem to be ‘Call Me by Your Name’, but ‘The Shape of Water’ and ‘Lady Bird’ are also in with a shot.

Twitter has also outlined the leaders in the Lead Actor, Lead Actress and Best Supporting Actress categories, based on tweet volume.

Going on this, you be picking Kaluuya, Ronan and Blige in their respective categories, which all seem like fairly solid bets.

Kaluuya is also backed by Sprout's insights, leading in mentions and positive mentions over Chalamet, while Sprout's data also has Robbie beating out Ronan (and Streep) - with almost 5x more total mentions.

Also, if you’re looking to join in the surrounding tweet conversation this evening, Twitter's also provided a listing of the most common emojis used in mentions of the nominated films.

Miss any of the #Oscars Best Picture nominees? Here they are as told through the emojis that are most used in Tweets about them. pic.twitter.com/z01fD0LCKf

It’s been an interesting year for film, and the surrounding social conversation is likely to be as lively as ever tonight. Hopefully these data points will help you demonstrate your superior knowledge of the Hollywood machine.