Amid the COVID-19 lockdowns, live-streaming is having a renaissance, with people looking to replace their lost social interactions as best they can, and the real-time engagement of streaming providing the closest alternative.

Video chat app Zoom, for example, has seen a big increase in usage, while multi-participant video chat app Houseparty is also on the rise. Instagram has also recognized this, fast-tracking the roll-out of its co-watching feature, which enables users to share their saved, liked and suggested photos/videos in the app with up to six people at a time via video chat. 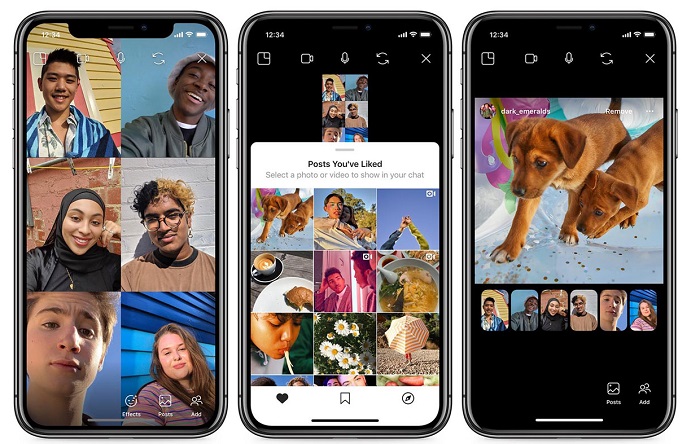 And now, Instagram may be looking to make another move to cater to increased usage on this front.

In a recent Q and A via Instagram Stories, Instagram chief Adam Mosseri noted that they are considering adding the capacity to go live with more people via Instagram Live.

"Right now you can only go live with one other person at a time, we're looking into if we could expand that, but it's not clear that that is the most pressing thing that we can add to Live, versus just getting stability up, adding more features, making it available on web, etcetera."

Adding Instagram Live to the web would also be helpful, but providing multi-participant streaming within Instagram Live could be a big addition, if Instagram were to find it a viable option.

And that's a big 'if' - the problem with adding multi-participant streaming is that it's expensive, both in terms of video transfer rates and data load, increasing demand on the hosting app's systems. Multi-streaming app Blab found this, which eventually lead to it shutting down - if you're going to enable groups of people to stream video, in real-time, in one stream, the back-end process can be costly, especially if you're making that single stream available to be viewed by a broader audience than only those participating in the video.

Video chat is a little different, in that the stream is confined to a smaller audience - it's the outside viewing capacity that adds significant complexity, and cost, which can make it a less attractive prospect.

"We're committed to building a truly social video experience on Facebook, and we're constantly evaluating the set of features we offer to the community. It's important that we prioritize and focus on experiences that drive the most value for the community."

'Drive the most value' could point to the fact that it's an expensive option to facilitate, and with it not seeing significant use, Facebook could no longer justify supporting it.

That could also make it increasingly unlikely that Instagram will facilitate more than one guest in a stream - but then again, with more people looking for more options on this front, and this potentially being the way we're going to be engaging for some months yet, maybe it'll be worth the experiment.

If this does become an option, you can imagine it would prove popular, offering a new way to participate in streams as they happen, but we'll have to wait and see if Instagram makes a move on this front.

And again, even adding Instagram Live to the web would be helpful. Expect to see an announcement on at least one of these options in the coming weeks.