Among the wide-ranging consequences of the COVID-19 lockdowns, one element that will become more significant as time goes on is the mental health impact, and in particular, how young people in their formative years are being restricted and/or limited by the lack of social contact.

Of course, social contact is important for everyone, but young adults are at a stage where they're learning who they are, and the social connections and experiences that they have are a big part of that. And while they can replicate some level of connection via video apps, it's not the same. And it's something that could lead to bigger problems, and will need to be addressed.

In order to provide some level of assistance on this front, Instagram has this week announced a new partnership with Netflix, which will see with the stars of some of Netflix’s most popular programs among young adult viewers talking about mental health and self-care amid the pandemic.

Netflix & Instagram have partnered on Wanna Talk About It?, a live series where every week one star (Lana Condor, Joey King, Alisha Boe, Caleb McLaughlin, Jerry Harris, Ross Butler, Noah Centineo) talks with a mental health expert about self care during a global pandemic. pic.twitter.com/nmYjXnBjfE

The partnership makes a lot of sense - 65% of Instagram's audience is under 34 years of age, while Netflix is the most popular video channel among teen users, even beating out YouTube in a recent study conducted by Piper Sandler. 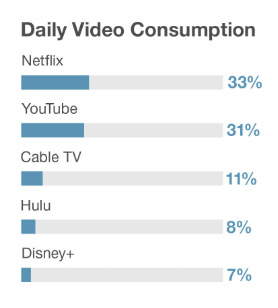 It also aligns with Instagram's more recent focus on contributing to positive mental health, and taking care of its users. That's been the impetus behind experiments like hiding total like counts and adding prompts on potentially offensive captions and comments, while it's also launched tools like 'Restrict', which give users more control over who and how people can interact with them in the app.

Partnering with Netflix could also help to solidify Instagram's brand perception among younger audiences - and maybe, as a side benefit for Facebook, give them both a leg up on YouTube in the same respect.

But brand strategy aside, it's a good initiative, and one that will benefit young, impressionable users - which, as noted, will be a group that is significantly impacted by the COVID-19 lockdowns.

"Wanna Talk About It?" will be available via the Netflix Instagram account this Thursday, April 9 at 4:00pm PT/7:00pm ET. The series will run every Thursday through May 14th.