As reported by reverse engineering expert Jane Manchun Wong, Instagram is now testing an option which would enable you to share your Instagram live streams direct to IGTV as soon as the broadcast has ended. 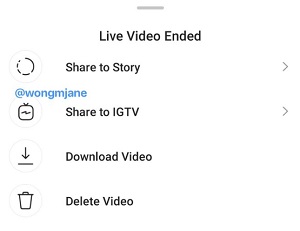 That could be an easy way to build your IGTV content library. IGTV, of course, hasn't taken off the way Instagram would have initially hoped, but more recent announcements like monetization options for the platform could give it a significant boost. IGTV could still become a significant consideration - and if you can tap into that growth in a simple way, and maximize the value of your content, then why wouldn't you tap the switch and save your Instagram Live broadcasts.

But then again, live broadcasts are generally not the best, most polished productions. Users may prefer to download their live video, then edit it to make it more punchy before uploading to IGTV. But if you don't have time for that, or you're happy with the authenticity of your initial recording, this could be a great option.

There's no word from Instagram on any official release, but with the platform putting more emphasis on IGTV, it seems likely that we'll see this arrive sooner, rather than later.