LinkedIn continues to see 'record engagement', with overall sessions up 29%, according to the latest performance update from parent company Microsoft. LinkedIn's also seeing steady growth in ad sales, in line with usage trends.

With Microsoft taking over LinkedIn back in 2016, we lost the more in-depth usage and performance data on LinkedIn specifically, including charts on user growth, engagement, etc.

Instead, now we only get a small summary within Microsoft's broader results listings, which provides a basic overview of the platform's numbers. 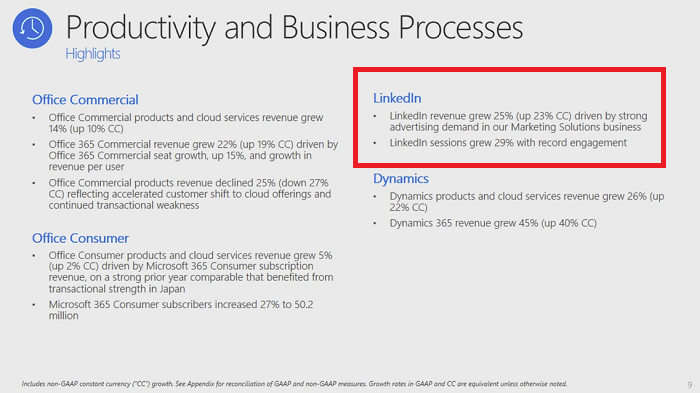 That's all we get, but as you can see, LinkedIn's performance remains steady, with Microsoft once again reporting 'record engagement'. Though what, exactly, that means is impossible to say.

LinkedIn has often been criticized for failing to disclose actual usage, preferring instead to focus on its overall member count, which currently stands at 740 million. Which is interesting, but that doesn't provide much insight into how many people are actually logging onto LinkedIn every day, or every month, nor how much time they might be spending in the app.

Some estimates have projected that LinkedIn's actual usage at 25% of its total user base, while others suggest it's around 40%. Either way, the projected monthly active user count is around 300 million or so, while time spent estimates sit at around 10 mins per session.

In this sense, 'record engagement' may not be as impressive when reflected in actual time spent, but still, Microsoft says that LinkedIn is continually seeing steady growth, and with more people set to return to work in the wake of the pandemic, it's likely to see even more attention moving forward, which will further boost advertiser interest.

Within the most recent period, LinkedIn has launched a range of new features, including the 'My Company' tab on LinkedIn company pages, which enables businesses to facilitate direct sharing of business-relevant posts, and new profile features, including video cover stories and 'Creator Mode'.

LinkedIn is also, reportedly, developing its own Clubhouse-like audio tools to enhance user connection, and a new incentive program to keep its top creators posting.

LinkedIn also continues to develop new ways to utilize its unmatched professional dataset, with tools that help connect users to their ideal jobs and/or educational opportunities.

Based on these results, LinkedIn is clearly on the right path, and as noted, with economic activity set to ramp-up in the second half of the year, you can expect the platform to become a bigger focus moving forward.

There's a lot to like about LinkedIn's progress, and while we don't get much specific insight, the overall data underlines the growing opportunities on the platform.