As China looks to increase pressure on internet companies, as part of a broader effort to maintain control over online activity, LinkedIn has announced that it will no longer be able to operate its local version of the platform, and will soon be shuttering LinkedIn China in favor of a new regional job board app.

LinkedIn first launched a localized Chinese version, which was built in adherence with local restrictions, back in 2014. But now, amid rising pressure, especially on foreign providers, LinkedIn has been forced to take a step back.

“While we’ve found success in helping Chinese members find jobs and economic opportunity, we have not found that same level of success in the more social aspects of sharing and staying informed. We’re also facing a significantly more challenging operating environment and greater compliance requirements in China. Given this, we’ve made the decision to sunset the current localized version of LinkedIn, which is how people in China access LinkedIn’s global social media platform, later this year.”

The announcement isn’t big a surprise, given the ongoing challenges LinkedIn has faced in adhering to strict local rules around online speech. The platform was sanctioned by Chinese officials earlier this year for “failing to control political content on its platform”, the latest in a range of clashes over content, with the Cyberspace Administration of China keeping close tabs on in-app interactions and reports, and how LinkedIn maintains separation between its main app and the Chinese version.

LinkedIn currently has around 54 million users in China, which, on a comparative scale, is not a massive amount (LinkedIn’s biggest competitor in job listings is WeChat, which has 1.25 billion active users), and given its lack of major growth in the market, LinkedIn may also have assessed that the extra measures required to maintain the local version were simply not worth the ongoing investment. 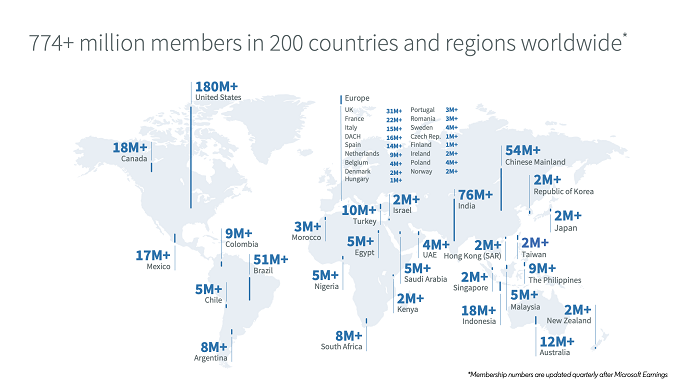 But still, it is significant in the broader scheme, both in terms of LinkedIn’s usage numbers (it now loses 54m from the above noted 774m figure) and in regards to western digital companies operating within the region, with LinkedIn being the last US social media platform that had been able to maintain operation within the Great Firewall over time.

Facebook had tried for years to get into the lucrative Chinese market, but eventually seemed to give up on the notion, while other social media providers have attempted to maintain separate Chinese operations, but haven’t been able, or willing, to meet the required standards on censorship.

In this respect, LinkedIn was the last big hope, and a test case, of sorts, as to how to work with Chinese regulators. But now, the Chinese internet becomes a little more closed off, which will dash the hopes of many others who had been hoping to see a new way forward in the market.

In replacement of LinkedIn China, LinkedIn will launch a new job board app in the region:

“Later this year, we will launch InJobs, a new, standalone jobs application for China. InJobs will not include a social feed or the ability to share posts or articles. We will also continue to work with Chinese businesses to help them create economic opportunity.”

In an operative sense, if anything, it will make LinkedIn’s process a little easier, while the change will likely have minimal impact on current LinkedIn users and processes.