Meta Launches Fundraisers in Reels, Another Way to Raise Money for Causes in the App

Meta’s expanding its charitable donation tools once again, with the addition of fundraisers in Reels, providing another avenue to raise awareness for your chosen initiatives. 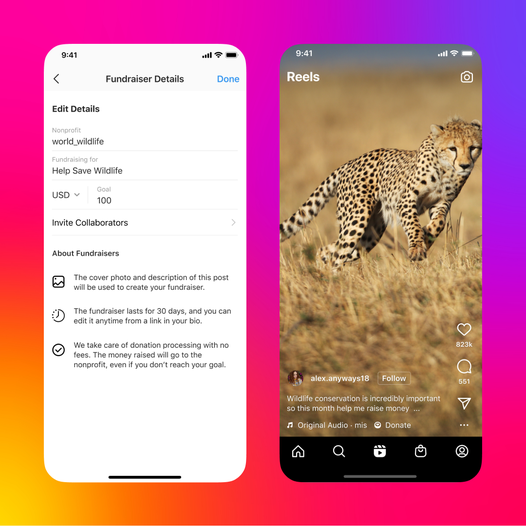 As you can see in this example, the new Reels fundraisers will add a ‘Donate’ button to the bottom of your Reels clip.

“Available today in more than 30 countries, you can donate and create fundraisers directly in Instagram Reels for more than 1.5 million nonprofits. As always, we cover the donation processing fees, so all the money raised using Fundraisers on Instagram goes directly to the organization.”

Users will be able to add fundraising details in the Reels creation process, with fundraiser links remaining active for 30 days.

The option provides another way to encourage user participation in fundraising efforts, which Instagram has been building on over time, and has accelerated in light of the pandemic.

Instagram added personal fundraisers in 2020, along with Instagram Live fundraisers, while it also launched the capacity for users to create and share nonprofit fundraisers directly within their IG feed. Last year, Instagram also added group fundraisers as another means to help maximize awareness of user-supported causes.

Given that younger audiences, in particular, are increasingly aligned to social causes, and contributing to social good, it makes sense for Instagram to provide more means to do exactly that, while the side benefit for the app is that it encourages funds transfer within Instagram, which leans into its broader eCommerce push.

If more users become more accustomed to allocating money to causes, which provides support for such efforts, that behavior could well extend to in-app shopping, and with Instagram also expanding shopping tags to all users, that will become a much bigger, more accessible focus over the coming months.

So while Meta’s support of cause-based initiatives is definitely a great way to raise awareness, and use its massive reach for good, it’s not entirely altruistic.

Still, it’s a good expansion, and giving more people more ways to use social media for communal benefit can only be a positive thing.

Reels fundraisers are available from today in 30 countries