After last week's Capitol riots, the focus has once again turned to social media, and the role it plays in communicating critical information, and balancing the need for accuracy in such messaging with people's freedom to be able to share whatever they choose.

Which, as we're all now well aware, is a difficult balance to strike, but with more and more people relying on social platforms to keep them up to date on the latest happenings in the world, it's now an unquestionably critical consideration.

But how much are people actually relying on social media apps to keep them informed on the latest news and events?

According to the latest data from Pew Research, which incorporates responses from more than 9,200 Americans, around 71% of people now get at least some of their news input from social media platforms. 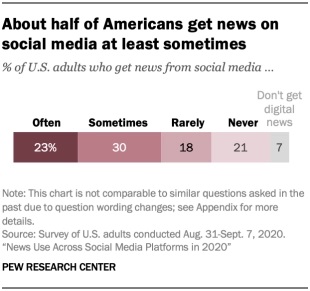 That's up from 68% in 2018 - though Pew does note that changes in their methodology do make direct comparison between the 2018 and 2020 numbers difficult.

Still, the results show that social media platforms have now become a critical news source, which is why accuracy is important. If people are making life decisions based on the information served to them on Facebook and Twitter, then it's important for those platforms to also ensure that the information people see is correct.

Or is that their responsibility at all, as private companies hosting free and open platforms for people to communicate?

This is where the debate will increasingly shift in 2021, and already, Democrat Senators in the US have flagged new investigations into the role that both Twitter and Facebook, in particular, played in the recent unrest.

One thing's for sure, people are definitely being informed by what they find on social platforms, and these stats show that its influence cannot be denied. Now it's a matter of determining what they should be allowed to display, and how you regulate such effectively. 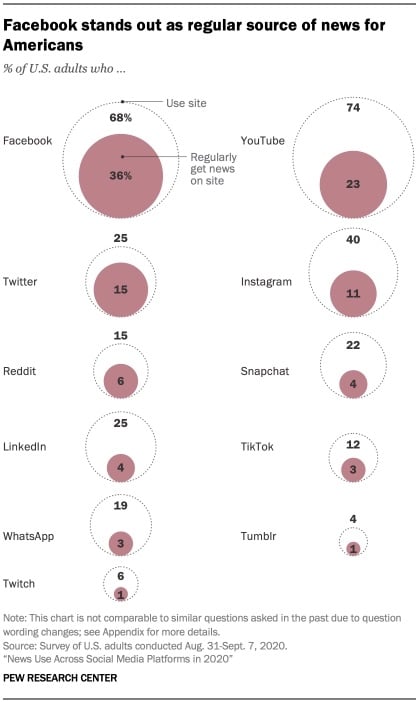 Indeed, a Twitter account called 'Facebook's Top 10', which ranks the top ten stories on Facebook every day, based on engagement (sourced from Facebook-owned CrowdTangle), shows a clear bias towards more extreme, right-wing news sites and Pages.

In many ways, this highlights a flaw in Facebook's engagement-driven approach, but Facebook is also a business, and it needs to maximize engagement to keep people coming back. As such, it has varying requirements it needs to balance. So is it a good thing that a private, profit-driven business, which is focused on maximizing engagement, is also a leading source of news and information?

Of course, almost every press outlet is privately-owned, and also driven by profit. But there does seem to be a need to institute some form of regulation around the distribution of news content across social platforms, in order to disincentivize the spread of misinformation - which, research has also shown has a higher tendency to be shared across the web than actual facts and balanced reporting. 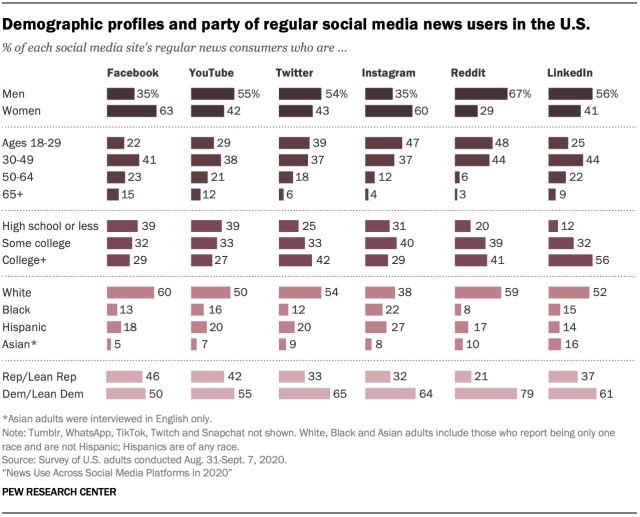 That's an interesting snapshot of varying news usage, and may provide some indicators of the trust each group places into the different social apps.

Also interesting - most people don't believe everything that they read on social apps: 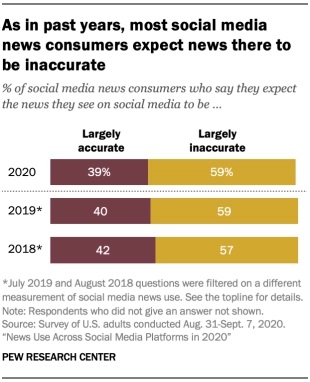 Which means that even though people are regularly consuming news content on social platforms, they also don't expect to be getting the whole truth.

Which begs the question as to why they're bothering to read news content at all - but theoretically, this means that people are staying in touch with the latest updates, while also viewing them with a level of skepticism. That doesn't mean that they don't believe what they're reading, but they may be more likely to dig a little deeper before making up their minds.

Or, they assume it's not true, but that there's probably a kernel of truth in there, which is enough to go on in many instances.

As always, the Pew's social media news insights provide an interesting snapshot of news usage on social platforms, and point to some of the key concerns as to the modern informational landscape. The bottom line is that many, many people are now getting news and information from social apps, and while they may suspect that some of it isn't entirely true, it's still a leading connector of news and information, which then influences how people think.

But maybe more importantly, Facebook, in particular, shows you what your family and friends believe, and that can be even more influential than reading the same in a newspaper or on a news site. If you know that your best friend, for example, believes that vaccination risks are a major issue, you'll be more likely to at least consider the same, while learning that your backwards uncle thinks climate change is a hoax will only further solidify your thinking on the issue.

People now have access to the political leanings of those that they respect, which they've not had in times past. That could be a significantly more influential factor on Facebook than its algorithms alone, and with the dopamine rush of Likes added into that mix, it can add more motivation for people to share more news content, and spark more discussion to reinforce their views.

That can have a major influence on how people think. And as we've seen, the expanded impacts of that can be significant.