Pinterest Announces New Features at its Creators' Festival, Including a 'Watch' Tab, 'Takes' and More

They’d already been spotted in testing, but today, as part of its annual Creators’ Festival event, Pinterest has officially announced its new, TikTok-like ‘Watch’ feed for Pin content, as well as a new ‘Takes’ response option for Idea Pins, among other updates for the app.

First off, on the new Watch feed – as we first reported last month, Pinterest is adding a scrolling, vertical feed of content to both align with the latest social content consumption trends, and provide a new means to discover a broader range of Pin content. 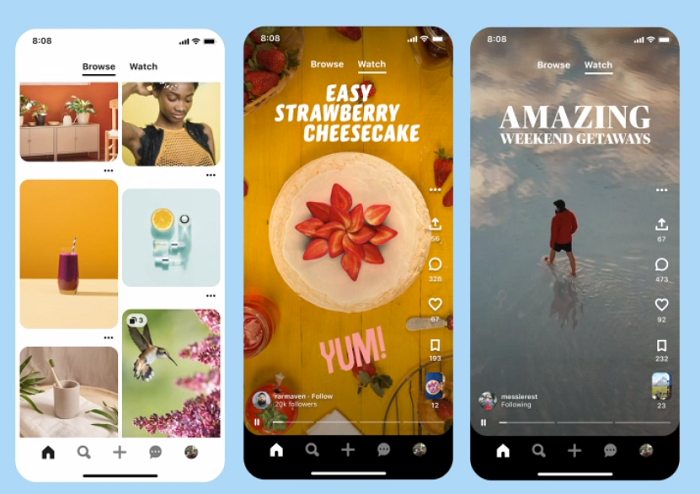 As you can here, the new full-screen discovery option includes both a ‘Browse’ and a ‘Watch’ display, with the ‘Browse’ mode being the traditional Pinterest search feed, and the ‘Watch’ mode switching to a TikTok-style presentation of the same, with both video and still image Pins displayed in the vertical scrolling stream.

Which, of course, looks very TikTok-esque, but given the ongoing rise and rise of TikTok, and the impact it’s having on broader consumption trends, it makes sense for Pinterest to lean into this, and facilitate Pin discovery in a way that’s increasingly likely to engage viewers.

It also provides additional opportunity to showcase more of its video-focused Idea Pins, the platform’s own take on the Stories format - and within that feature, Pinterest is also adding another interactive element in ‘Takes’. 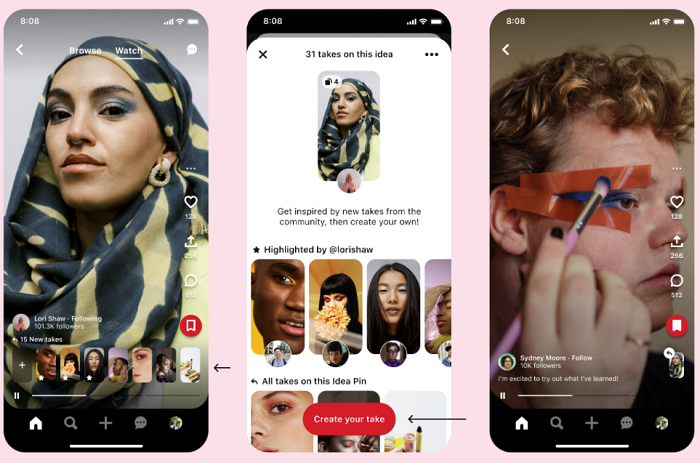 “A Take is an Idea Pin that is created in response to another Idea Pin. Takes appear as responses to the original Idea Pin and can also be seen in your home feed, from people you follow or on your profile.”

As you can see in the above examples, Pin Takes will be highlighted on the original Idea Pin itself, with creators able to select the best of them, which then get priority in the user display. Users will also be prompted to add their own Take when viewing Idea Pins.

The option will invite users to share their personal experiences with products, or to respond to recipe Idea Pins with a clip of how their own effort turned out, for example. It could also add context to craft how-to’s and other Pin formats, which could make it a valuable addition.

But it’s hard to overlook the visual similarity to TikTok in these new formats.

Takes is also, of course, very similar to the way TikTok’s Duets feature is used to respond to an original clip. Still, inspiration aside, the general functionality of both Takes and the Watch feed does fit with Pinterest’s content focus, and both could be helpful additions to boost in-app engagement. 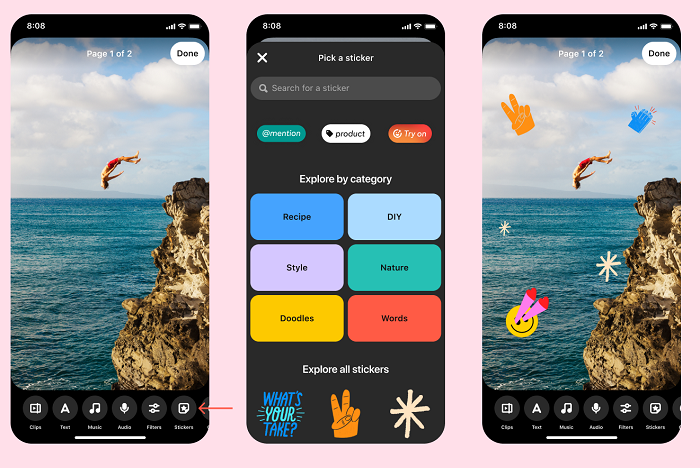 While it’s also announced the integration of its AR Try-On tools with Idea Pins, providing another way to trigger product engagement from the format. 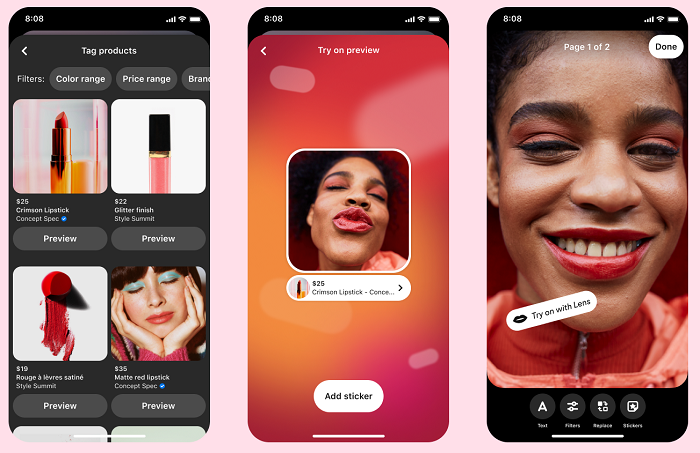 “This new capability allows creators to tag their Idea Pins with a new Try On sticker to add lip products, empowering Pinners to try on and shop right from the Idea Pin.”

It’s the first direct integration of Pinterest’s AR tools with its Idea Pins, and could pave the way for similar eCommerce-aligned AR options in future.

Approved creators will be able to add the new Try On stickers to their Idea Pins, with over 10,000 Try On-enabled products now available on the platform.

Pinterest’s also looking to expand its creator monetization push with a new “Creators Rewards” program, which will enable creators to participate in challenges to earn cash from Pinterest. 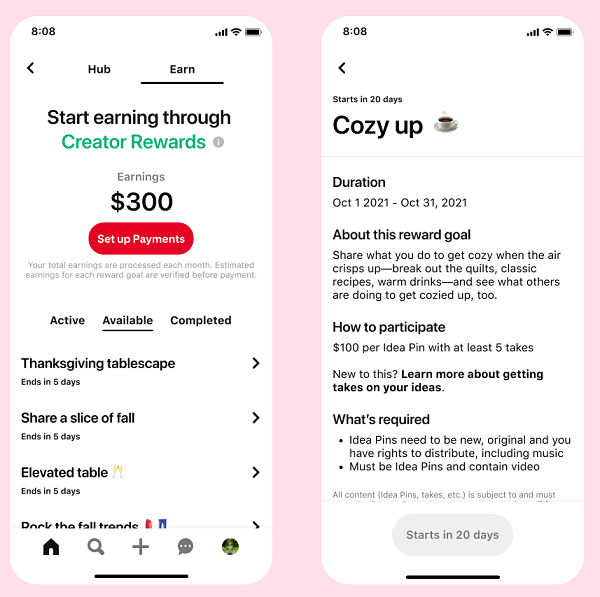 As you can see in this example, Pinterest will run challenges – like creating Idea Pins that generate at least 5 Takes – which creators can participate in to get a share of the cash reward.

Snapchat recently announced similar, with its ‘Spotlight Challenges’, and that could provide a better way to incentivize key engagement behaviors in the app, as opposed to paying for the top-performing content.

Pinterest says that it’s investing $20 million into the program, which is a big step up on the $500k that it allocated to its Creator Fund initiative earlier this year.

Pinterest is also adding a new ‘Profiles’ tab in its search results to better showcase individual creators in key verticals. 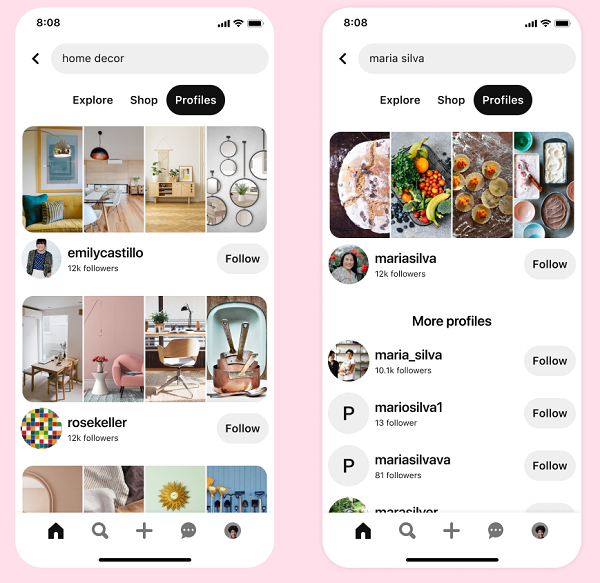 Which, again, will further highlight people to follow in the app, and give creators more opportunity to build community among interested users. 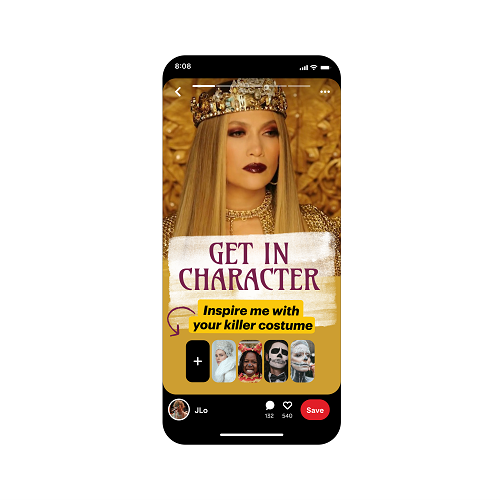 "Each notable creator will share an inspiring Idea Pin, encouraging Pinners to build on that idea and share their own take - everything from Halloween ideas to fall fashion to dog style. The activation will be rolling out between October 2021 and March 2022 in the US, Canada, UK, Australia, Germany and France."

These are some interesting updates, which look to take Pinterest’s UI to the next level, and maintain a fresh, engaging appeal within the app.

And video is the key focus. Pinterest has previously noted that video views increased more than 3x in 2020, amid rising usage during the pandemic lockdowns, and with broader social media consumption trends increasingly moving towards video content, it makes sense for Pinterest to also align with this shift.

But that is a key element to consider in your own platform efforts, and with more than 450 million users, it’s definitely worth keeping in mind, and thinking over where these new options may fit in your process.