With the US Presidential election only months away, this is an especially concerning incident.

From about 1pm on Wednesday, a range of celebrity and brand accounts started tweeting out a message promoting a crypto giveaway, in which funds sent to a specified bitcoin wallet would return double the amount to the sender. 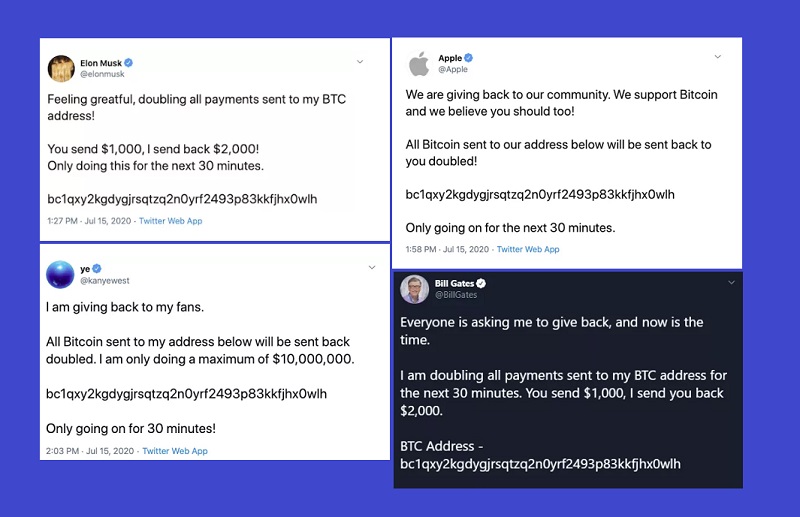 The messages, which were all similar, and all included the same bitcoin wallet address, were seemingly part of an elaborate hack, likely the largest ever seen on Twitter, which has sparked a new investigation into Twitter's security, and stoked new fears about the security of social media more generally.

Among a range of verified profiles, the hackers gained access to the accounts of:

And users did indeed begin sending money through - as noted by The Verge, because the exchanges are publicly listed on the blockchain-based network, people were able to monitor the transactions shifting funds to the bitcoin wallet address listed in the tweets. More than $300k, in total, had been transferred before reports of the hack started coming through. Experts say that these transactions are not reversible.

Twitter has since investigated the incident, and has provided this update:

"Our investigation is still ongoing but here’s what we know so far:

We detected what we believe to be a coordinated social engineering attack by people who successfully targeted some of our employees with access to internal systems and tools. We know they used this access to take control of many highly-visible (including verified) accounts and Tweet on their behalf. We’re looking into what other malicious activity they may have conducted or information they may have accessed and will share more here as we have it.

Once we became aware of the incident, we immediately locked down the affected accounts and removed Tweets posted by the attackers. We also limited functionality for a much larger group of accounts, like all verified accounts (even those with no evidence of being compromised), while we continue to fully investigate this. This was disruptive, but it was an important step to reduce risk. Most functionality has been restored but we may take further actions, and will update you if we do.

We have locked accounts that were compromised and will restore access to the original account owner only when we are certain we can do so securely. Internally, we’ve taken significant steps to limit access to internal systems and tools while our investigation is ongoing. More updates to come as our investigation continues."

The FBI has since reported that it will be leading a federal inquiry into the incident.

As noted, the incident is a major concern for Twitter's security, and while Twitter is still working out the specifics of how the hackers managed to gain access to these accounts, various concerns have been raised as to the breadth of issues that such capacity could cause - with some even suggesting that hacks of this type could spark increased global tensions.

That may seem overblown to some, but when you consider the way that US President Donald Trump has used tweets to communicate foreign policy, the threat here is very real.