Snapchat has published the latest version of its CitizenSnap report, which outlines the company’s various efforts to address environmental, social, and other governance concerns, and how Snap is planning to address these key elements within its future planning.

And within this, Snapchat has made some significant commitments to sustainability, and reducing its own carbon footprint.

You can read the full, 102-page report here, but in this post, we'll take a look at some of the key notes.

First off, Snapchat has outlined its key areas of Environment, Social and Governance (ESG) focus, which provide an overview of its broader goals within these elements. 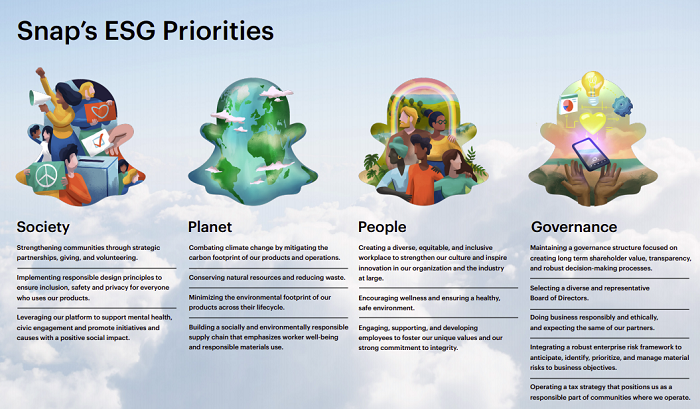 Not only are these key areas of focus for Snap, but also for its users, with more people increasingly looking to align themselves with businesses that take a stand on these key issues, and seek to have a more positive societal impact.

The report further outlines Snapchat’s efforts on each of these key fronts.

Starting with societal impact - with the 2020 US Election proving to be an inflection point, Snapchat has outlined how it helped to ensure its users were will-informed, and how it sought to increase voter participation via in-app initiatives.

”Snap partnered with TurboVote and others to create tools within Snapchat that helped users register to vote, make a plan to vote, and learn about candidates and issues. More than 30 million people used these tools, and more than 1.2 million people used our app to get help registering to vote in the US elections. More than half of these Snapchatters were first-time voters.”

With its younger audience base, this has been a key focus for the app, increasing awareness among younger voters, and prompting more of them to share their voice at the polls. Younger voters have traditionally had the lowest participation rates in US elections.

Snapchat has also provided various other notes on how it sought to boost civic participation and social justice initiatives. 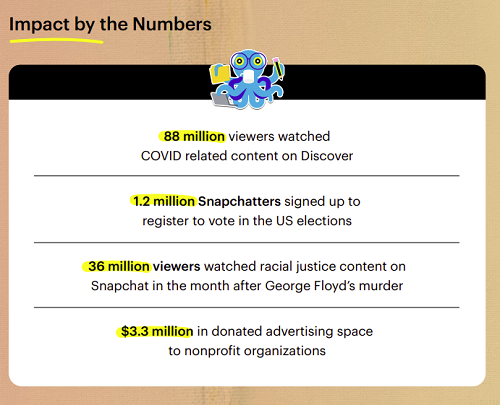 Again, with its younger audience skew, these are key initiatives for the app, helping to connect these audiences with more information around key topics of focus, and increase civic participation and societal awareness.

And as noted, environmental initiatives are another focus in this respect.

”The Snapchat community cares passionately about combating climate change and stands to experience some of its worst impacts. We feel a deep responsibility to take action at the pace and scale that is needed. So we are thrilled to announce an ambitious three-part climate strategy.”

Snap’s three-part approach will aim to maintain carbon neutral operations, adopt new emissions reduction targets, and eventually, have the company running on 100% renewable electricity, for all of its facilities globally. 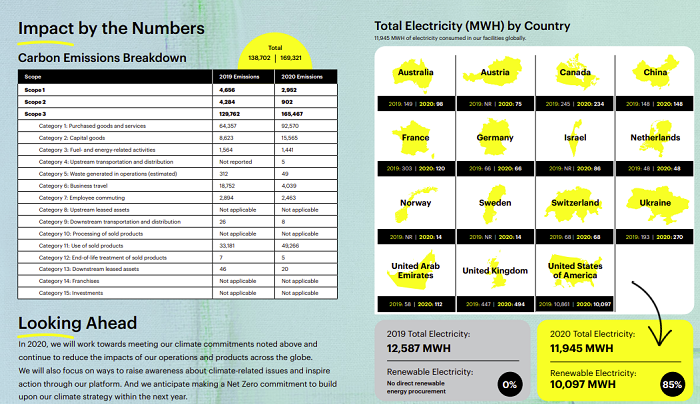 As Snap notes, its user base is more likely to be impacted by the effects of climate change over time, so it’s important for Snap to make clear commitments on this front in order to meet community expectation.

The company says that it’s already achieved Carbon Neutral status by purchasing offsets “sufficient to make the company carbon neutral going back to its founding in 2011”, but it will be going to effort to enact this as a more sustainable ongoing measure within its broader climate plan.

On other fronts, Snap notes that it’s also increased representation of women on its Board to 50%, while it also outlines its ongoing work on improving its machine learning processes to address potential bias in its systems.

Snapchat also reports that it now has more than 4,000 employees located in 15 countries around the world, and supports 35 unique languages.

There are some interesting insights here, and it’s good to see Snapchat making a concerted effort on all of these fronts to have a more positive impact on the world, and contribute to key causes.

“We believe it’s a moral imperative to work towards creating a healthy and safe society, and we know it matters to the hundreds of millions of Snapchatters who use our services every day. It’s also good for business. As our CitizenSnap report lays out, we have both made significant strides forward, and know there is so much more to do, and ways we can improve.”

Those efforts will impact the company, both in an operational sense, and a fundamental one, and it’s worth noting Snap’s approach to these increasingly important areas.