Snapchat knows that it can’t compete with Facebook on potential audience reach. Facebook has more than 2 billion active users, while Instagram, which is now positioned as Snap’s key rival, has more than 800 million total users – 250 million of them using the Snapchat-cloning Instagram Stories every day.

Snapchat has 173 million daily active users, and from a sheer numbers perspective, they look to be losing the war for attention - with Facebook further squeezing their growth opportunities at every turn.

But Snapchat, well aware that it can’t compete on raw figures, is not pitching itself as a Facebook rival in this regard. Instead, Snapchat’s working to sell its message that its users are more engaged, more aligned to the app.

That’s the focus of a new report released by Snapchat, which underlines the app's influential capacity, through the facilitation of increased sharing between more influential groups – i.e. your family and friends.

The data comes from a recent study by Sparkler (commissioned by Snap Inc.), which outlines key consumer spending influences – and highlights the importance of recommendations from friends. 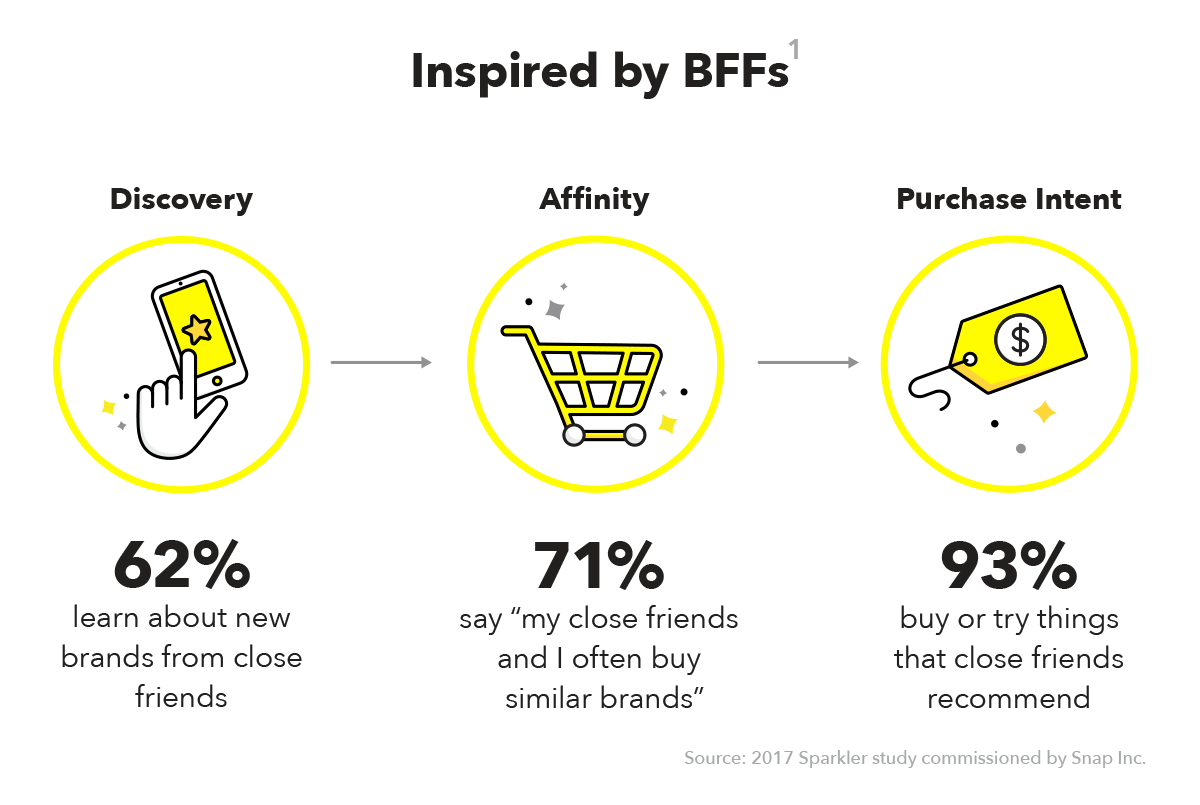 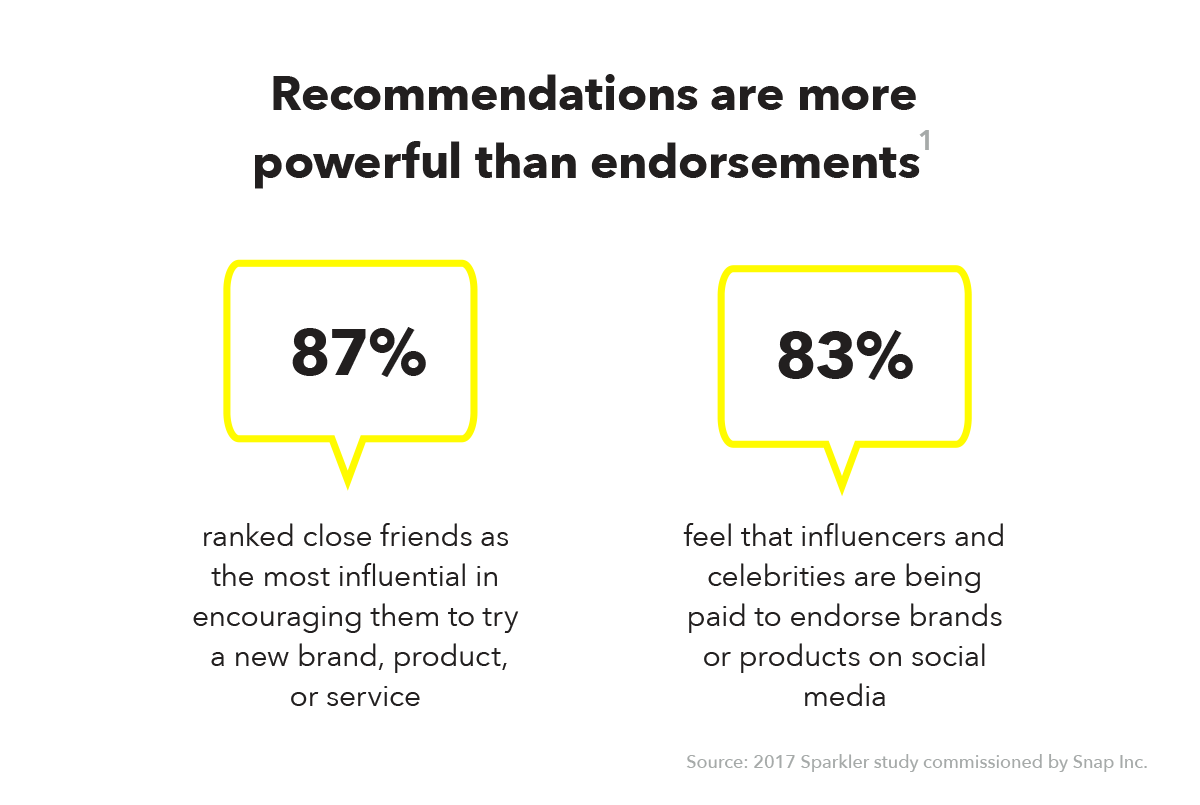 And where are people engaging more often with family and friends? You guessed it: Snapchat. 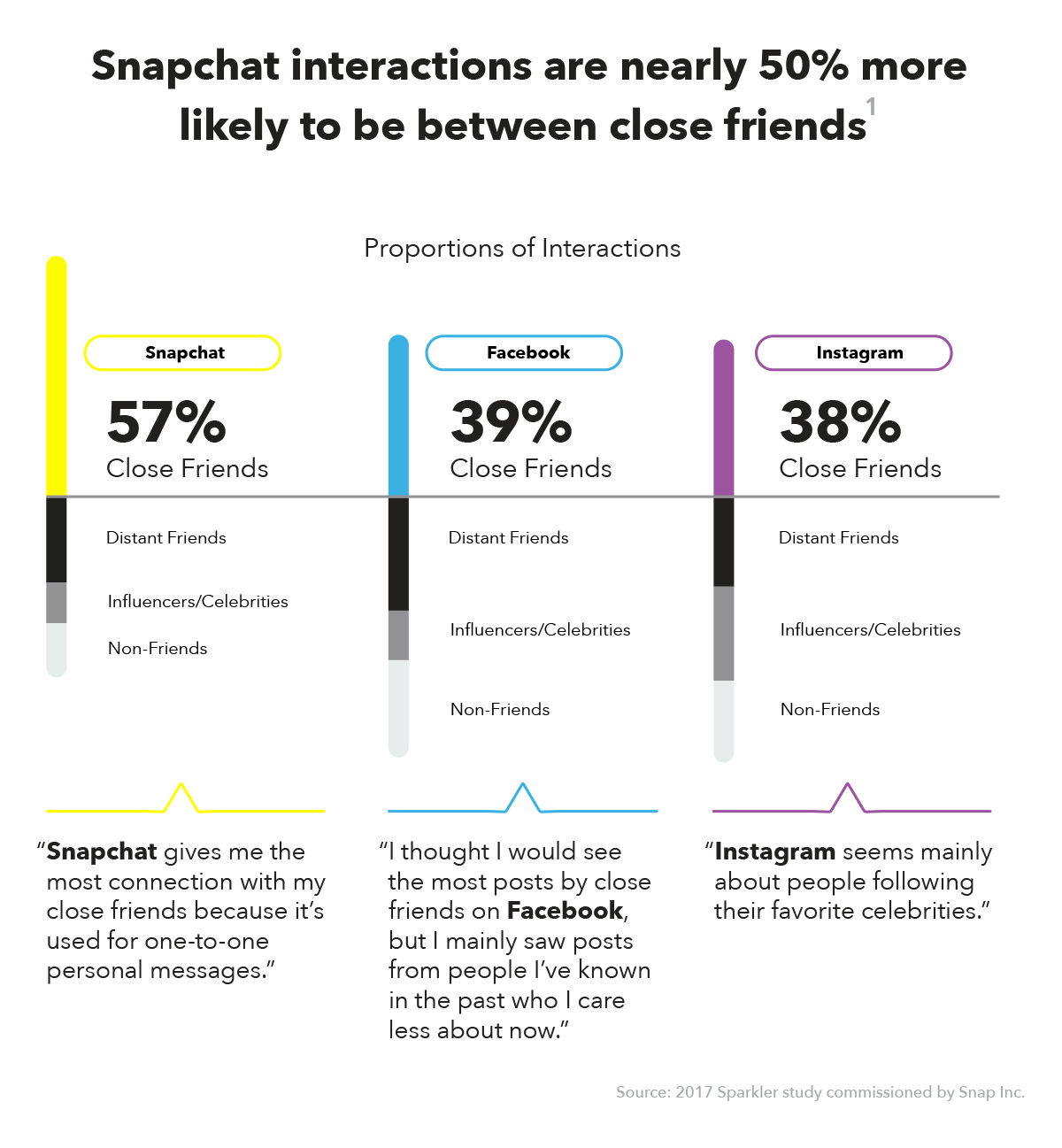 According to Snap Inc.’s data, Snapchat users are significantly more inclined to interact with close friends – which makes sense, as it’s the basis upon which the app was founded, providing a more private, intimate setting for your personal engagements.

That increase in personal usage may be part of the reason that Facebook is testing out a new option which would split Page posts from the main News Feed, as this, they would hope, could increase personal sharing on their network, and stop users (younger users in particular) switching across to Snapchat.

While Facebook, as noted, has a much larger audience, the trends formed among younger users can become habitual, which could keep them from migrating to Facebook in future. That means that while right now Facebook is in the lead, the reduction in personal updates could become a much bigger issue for The Social Network over time.

And as indicated by the data, those personal interactions could also hold significant value for advertisers – as noted by Snapchat:

“Those personal, one-to-one Snaps sent directly to friends are what make Snapchat a close friend network — not a broadcast network for reaching the largest number of people. This makes interactions more meaningful and ads more influential, as nearly 60% of Snaps are sent and received between close friends. Further, 80% of Snapchatters recall seeing themselves, a family member, a close friend, or significant other in a Lens or Filter — landing brands and advertisers right in Snapchatters’ inner Circle of Influence.

Most of Snapchat’s pitches on this front have been fairly soft, with the company clearly trying to switch the narrative away from their slowing growth, particularly amidst the rise of Instagram Stories. But this data provides a far more compelling picture for Snap Inc., and underlines why Facebook, despite its significantly larger audience share, might have some concerns.

Snap Inc. also recently noted that users are now spending 40 minutes per day in the app, compared to the average Instagrammer who spends 32 minutes in-app. It may not seem like much, but in combination, these data points indicate a significant trend worthy of attention.

It takes a little more effort to better align your Snapchat ad strategies with platform usage, but given these trends, it may well be worth it, especially for those brands looking to reach younger audiences.