In news that will likely come as no surprise, TikTok was once again the most downloaded app in July, according to the latest data from app analytics platform Sensor Tower. 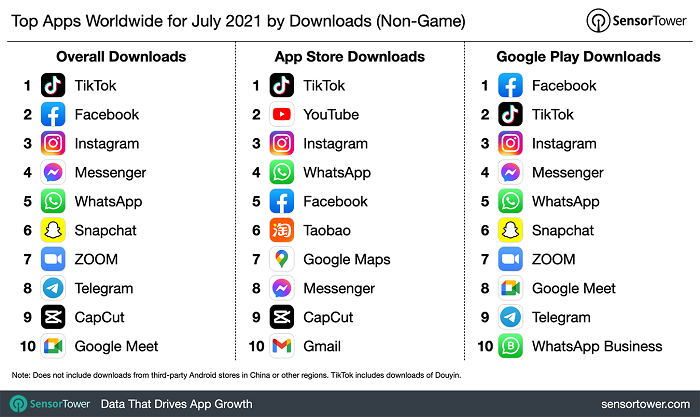 That shouldn't be surprising, because TikTok has been atop the monthly download charts for the past year and a half, with the only two exceptions being November last year, when WhatsApp briefly re-took the top spot, and January this year, when Telegram saw a sudden download surge (as a result of WhatsApp's controversial data privacy update).

"TikTok was the most downloaded non-gaming app worldwide for July 2021 with more than 63 million installs. The countries with the largest number intalls were from Douyin in China at 15%, followed by the United States at 9%."

So despite its significant market presence, TikTok is still gaining users in its primary, established markets, it's not only getting attention in new regions where it's just been released.

Which bodes well for the platform's ongoing growth, and its monetization potential - because while audience growth in itself is a key success factor, it generally takes time for users in new regions to become paying users in any form. If TikTok is still growing in regions where it's already built an audience, that points to expanded potential on both fronts as it looks to further boost its global presence.

If you ever find yourself wondering why Facebook and Snapchat and YouTube keep trying to push their own TikTok clone functionalities, this is why. TikTok is not only now a major platform, and a significant challenger in the social media space, it's also still growing at a faster rate than any of its competitors. That puts all of them under threat, so while it's logical, on one hand, for them to seek to retain user engagement by aligning with the short video trend, given that each platform is able to cater to such, in different ways, based on their existing content functions, these replica add-ons can also be viewed as a measure of self-preservation.

The most obvious example here is Facebook's own rise, which saw it supersede MySpace as the social media platform of choice. That shift started among younger users, with Facebook becoming the new trend, which then permeated to broader groups, older users, brands, etc.

Facebook became the place to be after first taking seed with younger user groups, which is a lot like TikTok right now - and while TikTok doesn't offer the same functional options that Facebook does, and Facebook itself is now so big that it would be difficult to upend it completely, the risk is clear. TikTok, which is on track to reach a billion users in 2021, and continues to add new functions like in-stream shopping, Stories and expanded live broadcasts, is looking more and more like a genuine challenger, which could severely impact usage of Facebook's apps over time, and may eventually make it the prime social network of choice, over Facebook or Instagram.

It's got a long way to go, and as you can see, Facebook's apps still dominate the overall top 10 list, taking up 4 of the top 5 spots. But the TikTok replication effort makes perfect sense when viewed from this perspective.

Among other app trends, video editing app CapCut, which enables users to create videos to post in other apps, and is also owned by TikTok's parent company ByteDance, remains in the top 10, while Chinese shopping platform TaoBao has also returned to the charts.

But the main point of note remains TikTok, and its enduring popularity. Now you know why Facebook sought to stoke fears about Chinese tracking through the app with US Senators in 2019, an angle that it's no doubt still working behind the scenes, in the hopes that it might get shut down in the US.

Because right now, it doesn't look like much else is going to slow down its growth and expansion around the world.