It’s been a few months, and we haven’t heard much about how Twitter Blue, the app’s new subscription service which gives users access to a range of additional tweet features for a monthly fee, is faring among users in the initial test pool (Canada and Australia).

But it does seem like Twitter is gearing up for the next stage of deployment, with app researcher Alessandro Paluzzi spotting some new Twitter Blue intro screens in development. 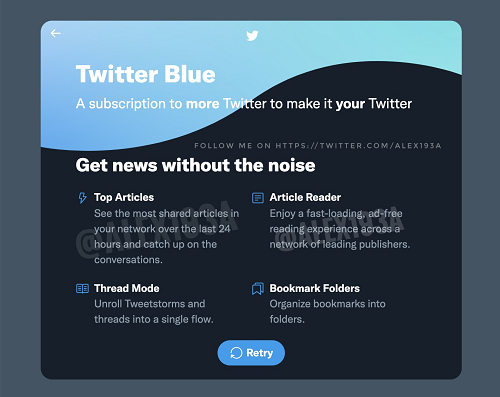 As you can see here, the updated Twitter Blue info cards outline some new features for the option.

Based on these new intro cards, Blue subscribers will also, additionally, soon get access to:

Those would certainly juice up the Twitter Blue offering, with the integration of Scroll and Nuzzel, in particular, providing significantly more motivation to sign-up to the service.

Which, right now, is not overly appealing. I’m in Australia, so I have access to Twitter Blue, and I haven’t considered it even once, while most people I know don’t even realize it exists.

The big, initial lure of Twitter Blue, of course, was ‘Undo Tweets’, which Twitter hoped would appeal to the scores of users that are always calling for a tweet editing option. But ‘Undo Tweets’ is not the same. If you notice an error, you can already just delete a tweet and start again, while with editing, you’d be able to go in and make a correction at a later time, without having to re-do the entire thing.

The other Twitter Blue offerings, right now, are pretty basic, but these new additions would certainly add more enticement, and could help Twitter make Blue a more appealing option to more users, especially if it looks to expand access to more regions.

The addition of Scroll functionality, in particular, could be appealing. Scroll, which Twitter acquired back in May, had provided a way for people to read online articles without the ads, "cleaning up the reading experience and giving people what they want: just the content".

Scroll used the money that it generated from its user subscriptions to then pass on revenue to the publishers that it sourced content from, providing a more equitable way to support publications and creators, while also facilitating a better online reading experience.

The new ‘Article Reader’ mode seems like exactly this, while Nuzzel, also acquired as part of the Scroll acquisition, had also been a very popular app among social media users.

A lot, then, comes down to price. Right now, Twitter Blue is priced at $3.49 CAD/$4.49 AUD, respectively – the equivalent of around $US3 per month. If Twitter can keep the price of Blue down, and offer improved functionality, it could become a much bigger thing.

And really, Twitter only needs a small percentage of users to take it up for it to be a valuable addition. At its current pricing, even if only 1% of Twitter’s total user base (206m) were to eventually sign-up and pledge that monthly fee, that would still equate to somewhere around $7 million per month, or $21m per quarter, in direct revenue for the company, straight up.

There’s no official word from Twitter on an expansion of Twitter Blue, but based on these new intro screens, it does seem like it’s coming very soon.