As social media platforms have come under more intense scrutiny than ever before as part of the probe into how foreign operatives sought to influence the 2016 US Presidential Election, one of the key issues that’s been highlighted is the use of bots and automated systems to help spread fake news and amplify specific messages.

This type of mis-use has been a problem pretty much since social media has existed – if you give people a number to compete on, like follower or Like counts, they will, and some, inevitably, will cheat.

The fake social media marketplace is now a billion-dollar industry, with many providers, mostly in third world countries, offering ways to artificially boost your numbers with armies of fake profiles and accounts built for purpose.

The bot problem is particularly prevalent on Twitter - as highlighted in a recent report from The New York Times, many Twitter users have paid to inflate their numbers, and have then used those higher audience counts as leverage to help them generate income, framing themselves as ‘influencers’ and people of importance, all through artificial means. 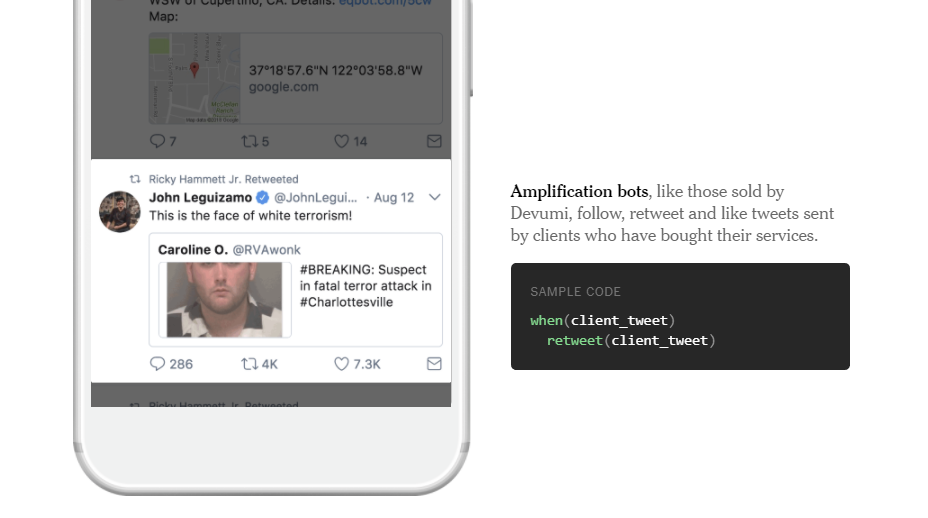 The high profile nature of that investigation seems to have pushed Twitter into action, with the platform announcing a range of new and revised rules around how their platform/s can be used, in order to curb such tactics – here’s what’s been announced.

As announced by Twitter’s Yoel Roth, via a company blog post:

“Keeping Twitter safe and free from spam is a top priority for us. One of the most common spam violations we see is the use of multiple accounts and the Twitter developer platform to attempt to artificially amplify or inflate the prominence of certain Tweets. To be clear: Twitter prohibits any attempt to use automation for the purposes of posting or disseminating spam, and such behavior may result in enforcement action.”

To tackle this head on, Twitter’s implementing some new regulations and limitations within their systems and API usage rules.

Do not (and do not allow your users to) simultaneously post identical or substantially similar content to multiple accounts. For example, your service should not permit a user to select several accounts they control from which to publish a given Tweet.

This new rule will seek to restrict re-posting, which is obviously aimed at curbing the above-noted behavior - but will also impact those publishers who have several handles or publish content to several Twitter accounts. Really, that’s not the way Twitter wants their platform to be used anyway, so the restriction makes sense, but it may require a re-think for brands (and individuals) who post to multiple accounts.

“As an alternative to posting identical content, you can Retweet content from one account from the other accounts you wish to share that post from. This should only be done from a small number of distinct accounts that you directly control. Please note that bulk, aggressive, or very high-volume automated Retweeting is not permitted under the Automation Rules, and may be subject to enforcement actions.”

Do not (and do not allow your users to) simultaneously perform actions such as Likes, Retweets, or follows from multiple accounts. For example, your service should not permit a user to select several accounts they control to follow a specified account.

Again, the motivation here is fairly obvious – Twitter’s looking to crackdown on those providers who utilize spammy tactics, which have no doubt seen an increase in popularity as Twitter’s algorithm has been implemented, which gives more exposure to tweets which inspire such interaction.

The key area they’re focusing on here is the use of social media management tools to simplify the process of adding followers to a specific account, by selecting several accounts you control and making them follow said user. That’s not incredibly common outside of spam merchants, so the impact of this change will likely be less than the first note.

The use of any form of automation (including scheduling) to post identical or substantially similar content, or to perform actions such as Likes or Retweets, across many accounts that have authorized your app (whether or not you created or directly control those accounts) is not permitted. For example, applications that coordinate activity across multiple accounts to simultaneously post Tweets with a specific hashtag (e.g. in an attempt to cause that topic to trend) are prohibited.

Again, the focus here is fairly clear – Twitter’s seeking to limit the capacity of spammers to manipulate their systems through mass posting, liking or retweeting.

The use of such tactics to boost specific hashtags, in particular, has been one of the key areas of focus within the broader election probe, with groups able to manufacture the popularity of a particular message, in order to fuel division.

“As a sole exception to this rule, applications that broadcast or share weather, emergency, or other public service announcements of broad community interest (for example, earthquake or tsunami alerts) are permitted to post this content across multiple accounts who have authorized an app.”

Twitter has also announced that these rules will go into effect from today for TweetDeck users.

“Users of TweetDeck will no longer be able to select multiple accounts through which to perform an action such as Tweeting, Retweeting, liking, or following.”

The announcement has caused headaches for those using TweetDeck, with scheduled tweets being shifted and removed from some accounts.

super annoying for those of us who have a band and personal or artist and personal account that we'd often like to tweet from at the same time. seems like a really over-arching solution to a small niche problem. sucks.

way to make your program obsolete. Tweetdeck users managing multiple verified accounts aren't folks you should be worried about spamming.

Twitter has also provided a time limit for apps to comply with the new regulations:

“If your app or service includes features which allow users to perform simultaneous actions across multiple accounts, you should make changes to bring it into compliance with this policy by March 23, 2018. Failure to comply with these rules could result in enforcement action, up to and including the suspension of associated applications and accounts.”

For the most part, Twitter’s latest actions should be welcomed – though as noted, they will also cause initial headaches for some legitimate users of the platform.

As we’ve reported previously, recent research has estimated that fake profiles make up around 15% of Twitter’s total user count, which, as per their latest earnings results, would suggest there are now around 49.5 million false Twitter users. That’s a significant problem, and with people so easily able to buy Twitter followers and/or inflate their importance, it erodes the value of platform audience, and makes it harder to determine which voices are actually worth listening to.

For Twitter, that’s a big issue, because more than anything else, Twitter wants to showcase the best of what the platform has to offer in order to entice new users back to the app. If a new user were to take followers as an indicator of importance, and follow people based on that, they’d likely end up disappointed at the quality of tweets they ended up seeing, because many of those with a large audience have actually either purchased or built their audience through questionable methods – not necessarily by sharing good tweets.

This points to another common practice which Twitter’s looking to crack down on – as per The Next Web’s Matt Navarra:

This is the oldest trick in the Twitter playbook – if you want to grow your Twitter audience, and thereby boost your perceived level of influence, you simply follow a heap of accounts, then unfollow the ones who don’t follow back. Do this every day/week and you’ll quickly grow your numbers – they won’t necessarily be listening to you, but for those less Twitter-savvy, your stats will look impressive.

Many have been able to leverage such tactics to expand their career opportunities, so it makes sense that people would do it, but it does de-value the Twitter experience, and as such, it makes perfect sense for Twitter to stamp it out.

The question then is how will Twitter do this, exactly? While they’ve noted the various punishments for violations, there’s not a lot of detail on how Twitter will detect violators – though the restrictions on their API use will be significant in that they’ll be able to cut off entire apps which don’t follow the rules.

For individual violations, it’ll likely be much harder for Twitter to detect – though that are slowly weeding out more accounts and violations, with another round of bot accounts expelled from the service this week.

There’s also a question of how much Twitter really wants to push such action, given that if they did actually expel some 50 million accounts from their platform, their usage numbers would fall – an issue which has caused Twitter various headaches in recent times.

A drop in usage sends a bad message to the market – and while Twitter would be able to frame it as a longer-term benefit, its unlikely shareholders would care, especially if the MAU numbers dropped from 330 million to 280 million overnight.

The answer, then, is revenue. If Twitter wants to remove bots and crackdown on misuse, it also needs to prove that those accounts are doing nothing to help the platform’s business interests. Twitter posted its first ever profit in its latest results, and if they can continue to grow their ad revenue, that will be the counter they need to show that they can safely reduce their user numbers and improve the integrity of the platform, without the need for greater audience mass.

And with Facebook making things harder for brands on their platform, now is the time for all other social networks to show their worth – they may not be able to compete with Facebook on raw numbers, but if they can prove there’s significant value in niche audiences, they won’t have to. Removing fakes and cheats from their system would then play a key part in improving their targeting and response.

As noted, the shift may cause some early headaches, but in the long run, Twitter’s new push to purge those violating their rules will be a positive for social media marketers, as more of your messages will be seen by actual people, will be actually clicked on, and will lead to actual conversions.

Here’s hoping Twitter can continue to push forward with their efforts.