This is a significant update - Twitter had today announced that iOS users will now be able to add tweets directly into their Snapchat snaps, providing more options for sharing tweet conversations. 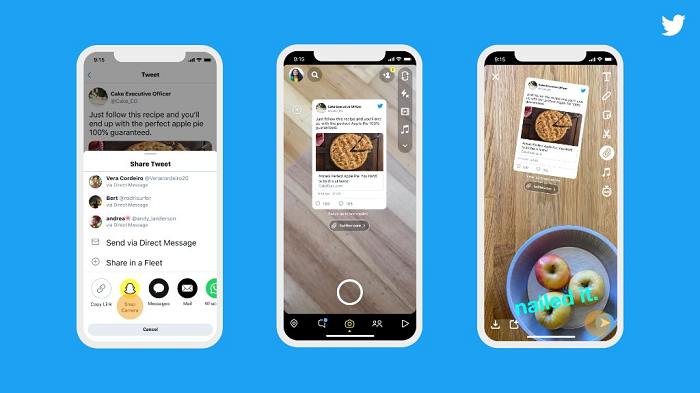 That's significant because the major social platforms don't tend to play well together, preferring instead to keep users within their own apps. But tweets are shared everywhere regardless, and it makes logical sense for Twitter to enable expanded tweet sharing, with official linkage back to the app, as that could help to drive more Snap users back to Twitter to view the expanded discussion.

As you can see in the above screenshots, the new process provides Snapchat as an option within your Twitter share tools.

Fairly straightforward, and as noted, the key here is that it will drive traffic back to Twitter, which provides increased functionality for tweet sharing, as well as direct connection back to the app.

That's an even bigger integration. As noted by Jane Manchun Wong, Instagram hasn't provided direct Twitter integration since it disabled Twitter card preview support back in 2012, which makes it annoyingly difficult to share content between the two apps. Now, it seems they're mending bridges, which could facilitate not just tweets in Stories stickers, but wholly new integration options which would enable direct sharing of Instagram posts to Twitter as well, fully integrated and formatted in-line.

That's not part of this proposal, and it may not ever be. But it would definitely be handy - and with Twitter seemingly now more open to such, it could pave the way for improved connection.

I mean, it's probably not a highly effective growth strategy to keep users in each app from sharing with the others. Maybe, in their earlier days, there was some benefit to such limitation, but really, it seems to now be better for all of three apps to now enable more cross-linkage, as it can help to promote their content, without people just screenshotting it and sharing it in each anyway.

Making it more difficult is just denying the reality of how people use each app, while providing better tools for such has clear benefits for usage.

It's an interesting development either way - for now, the option is only available on iOS, with a limited group getting access to the Instagram sharing option.