Hey, how do you increase the take-up of an already unpopular feature, without overextending your already stretched resources?

If you answered ‘increase the price by 67%, without improving the offering in any way’, you may be qualified for Twitter’s product dev team.

This week, Twitter has begun informing Twitter Blue subscribers that they’ll soon have to pay a lot more for their monthly subscription.

As you can see in this notification, the monthly charge for Twitter Blue access is jumping from $2.99 to $4.99 in the US, with all other regions also seeing the same relative increase.

Current Blue subscribers will be spared the additional charges for a couple of months, but from October, everyone will be copping a 67% jump in costs - with no additional features, no change in process. Nothing.

Which, as noted, seems particularly odd given that Twitter Blue isn’t doing so well as it is.

As part of Twitter’s latest performance update, posted last week, the company reported that its revenue from ‘subscriptions and other’ sources totaled $100 million in Q2 2022 - which is actually a decrease of 36% for this element, year-over-year. 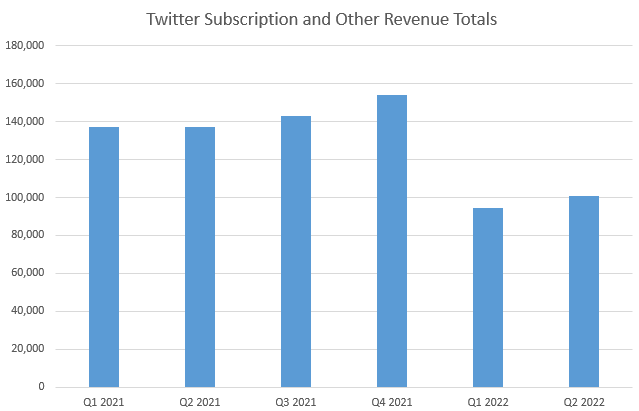 That would suggest that Twitter Blue isn't really gaining any traction at all, while Twitter CEO Parag Agrawal also noted back in May that the company 'has not hit intermediate milestones that enable confidence' with its new revenue and growth projects, including Blue.

Twitter hasn’t shared any official numbers, but independent insight, based on payments made via app stores, has also indicated that Twitter really isn’t taking in much revenue from subscription payments.

So why up the price?

It seems like a negative move, which will result in more users who’ve signed up to try it out dumping the additional cost. And amid a broader economic downturn, which has seen the cost of living rise overall, will many people really be willing to pay $5 per month for NFT profile pictures and a couple of custom icons?

I’m guessing not. But Twitter needs to make money somehow, and as various commentators have noted, the company is also about to see a significant jump in legal costs due its coming court battle with Elon Musk.

Maybe that’s why it’s upping the price, but it does seem like Twitter should at least be looking to sweeten the deal somehow, if it’s going to ask for more money.

I mean, Snapchat+, which is similar to Twitter Blue, is already reportedly outpacing Blue subscriptions, only a month after launch. Snapchat has also added in new features, like access to a desktop version of the app, exclusively to S+ users.

It seems that there are ways to make subscription offerings like this work – though I’m not sure that boosting the price, seemingly at random, is the growth hack Twitter might think.