The 2020 Super Bowl has come and gone, and once again, there were many memorable ad campaigns tied into the big event.

Celebrating its role in the proceedings, Twitter has announced the winners of its third 'Brand Bowl', which looks at the best Super Bowl campaigns on Twitter, including categories for the brand that drove the largest overall conversation share, the brand with the most RT's, the most positive reception, etc.

The Super Bowl is always one of the biggest events of the year on Twitter, with millions of users turning to the platform to share their thoughts in real-time, and engage in the broader discussion about the game, the ads and the halftime show. As such, it makes sense for Twitter to give the Super Bowl added focus - and with brands able to generate significant exposure from a single tweet (remember the Oreo's 'Dunk in the Dark' tweet?), it also makes sense that Twitter would want to showcase the best, and encourage participation for future tweet tie-ins.

So who were Twitter's big winners this time around? 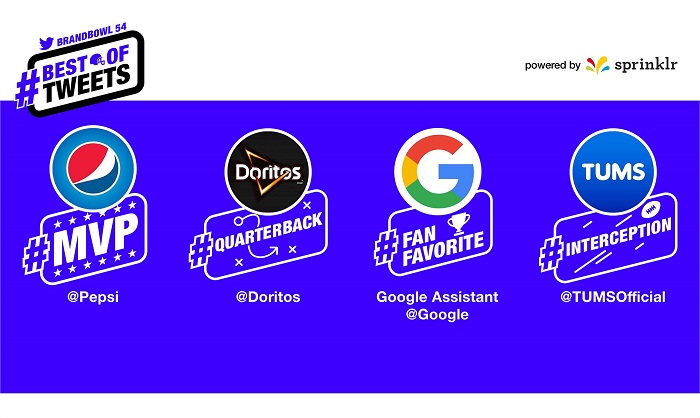 Pepsi, which sponsors the Super Bowl halftime show, drove the largest Twitter conversation share with its interactive tweet campaign, which invited users to guess elements of the half time show.

Make your predictions and keep track of all the jaw-dropping moments during the #PepsiHalftime show! #Sweepstakes Rules: https://t.co/U7OzBzJ5pVhttps://t.co/dhQ3NzL5y4

Gamification and interaction are always strong elements that can help to boost exposure on social platforms. Pepsi used its campaign to drive awareness for Pepsi Zero Sugar, which included giveaways and major prizes tied into its new offering, incentivizing more participation via tweet.

Doritos also hit on a winner with its 'dance off' ad featuring Lil' Nas X and Sam Elliott, and while the below tweet didn't get anywhere near the million required to get Billy Ray Cyrus to dance, it still saw the most retweets of any brand tweet during the game

Google, meanwhile, saw the most positive tweet mentions - though it seems odd that, for all of Google's advanced technology, its ad pretty much only shows how it's made a slightly better photo album and notebook.

A love story about the moments that matter most, told with a little help from Google. #SuperBowlLIV pic.twitter.com/JXbcKpGSH5

And Tums saw the most tweets for a brand without a related TV spot, with a $54k or luxury vacation giveaway that users could tweet to enter during the game.

Every time Sunday’s game has got you feeling the burn, make it worth the burn. Tweet the TUMSmoji ???? and #TUMSWORTHYsweepstakes during every TUMSworthy moment for a chance to win big. Rules: https://t.co/g2lGRkzvbd pic.twitter.com/ccQRewOqbZ

The campaign once again underlines the brand awareness potential of giveaways, while as Twitter notes, Tums also essentially "branded an existing emoji", which is a clever way to maintain that connection after the event.

Connect - The brand whose campaign was best tied to the event

Hashtag - The brand that created a hashtag which resonated most with the conversation, while also reflecting brand messaging

Creativity - The brand whose campaign used Twitter resources and creative hacks, rather than just promoted tweets or video

Both Hyundai and Olay utilized celebrities in major TV spots, with their tweets supporting their larger campaigns, while Pantone used color samples as a means to communicate their branding, tied into the action as it happened.

TOUCHDOWN!
Reminder, the ball only needs to break the plane or touch the PANTONE 16-1364 TCX pylons.#BigGameColorCommentary pic.twitter.com/E1lTXVI5QK

But the NFL won the most creative campaign award by offering fans the opportunity to have their tweets ​printed on the official Super Bowl celebration confetti, which rained down onto the winning players at the conclusion of the game.

Send a message to your team using #NFLTwitter, and you might have YOUR Tweet featured on Confetti in the #SBLIV Celebration. pic.twitter.com/JaFNZ6DpXg

"The Tweet-confetti turned into one of the hottest souvenirs of the night, with fans clamoring to take home their iconic Tweets."

The #SuperBowLIV Chiefs victory confetti has tweets from happy fans on it! pic.twitter.com/IxLcL7grgS

It's a pretty amazing brand opportunity, with Twitter really winning out. Which is probably why it won a Brand Bowl award. It's not necessarily easy to replicate, but it's another creative usage of tweets within a campaign.

There are some interesting pointers here, some worthy notes which could be built into your own tweet campaigns. Of course, most of these promotions also utilize million-dollar ads, which few brands can afford to create, but even so, the related tie-ins and initiatives still underline some interesting tweet promotional pushes, which could help to get you thinking.