Twitter looks set to make podcasts a much bigger focus in the app, with a new test underway that would provide a dedicated tab for podcasts, reachable via both in the side and lower function bars of the app. 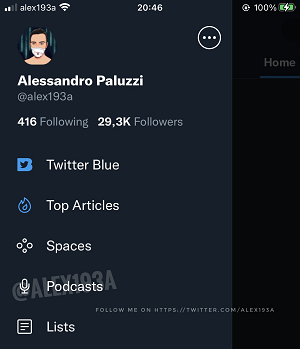 As you can see in this screenshot, posted by app researcher Alessando Paluzzi, Twitter is testing a new podcasts section in the sidebar. 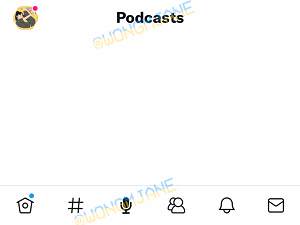 That suggests that Twitter is about to make a big leap into podcast discovery, which will likely enable podcasters to create direct links to their podcasts in the app, similar to how they’re now able to create active links to their newsletters, enabled by Twitter’s acquisition of Revue last year.

For podcasts, Twitter also acquired pod discovery app Breaker last year, which, at the time, seemed to be intended to improve the discovery of Spaces specifically, with the Breaker team noting that they would be incorporated into the Spaces development group.

Maybe, Twitter actually has bigger plans in mind for a more specific integration of Breaker’s podcast listening capacity, while it could also tie that into Spaces, with recorded Spaces then added as podcasts to listen to in the new tab.

It’s hard to say whether social audio will be an enduring, valuable trend for Twitter to lean into, with the popularity of Clubhouse dying down after its initial surge late last year. But then again, Clubhouse is still growing in some regions, and maybe, by enabling more discovery, Twitter will be able to tap into those same trends, and make Spaces a more significant consideration to more users.

The addition will also likely tie into Twitter’s increasing creator push, in providing another way for creators to build audience around their content in the app. Podcasts, at the moment, are a predominantly passive experience, with the listener tuning in, then moving on, but part of the concept of Breaker was to also add in social elements, like episode comments and Likes, which could help to build engagement and community, and improve podcast discovery in the app.

If Twitter can get it right, it could indeed be a great addition, especially when you also consider that podcast listenership has increased significantly in recent years.

According to Edison’s most recent ‘Infinite Dial’ report, 41% of American adults now listen to at least one podcast each month, up from 32% in 2019, while the total US podcast audience is expected to rise to 164 million per month by 2021, up from 120 million last year.

There’s a lot of potential there, and it’s an area that other social networks are not looking to capitalize on directly.

Maybe, that presents unique opportunity for Twitter, and another possible pathway to growth for the app.

We asked Twitter about the test, and it provided this response:

"We’re always exploring new ways to help people engage in the conversation on Twitter, but have no further details to share at this time.

Not much to go on as yet, but it does look to be coming soon.