Good news for Twitter Spaces broadcasters – today, Twitter has announced that all Spaces hosts can now record their chats, on both iOS and Android devices. 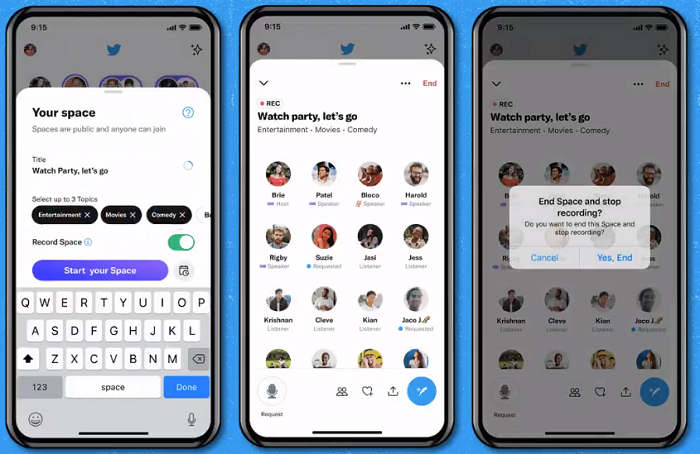 The functionality provides additional value for your Spaces content, which can now be re-shared to generate more interest, while it will also facilitate broader re-purposing considerations.

As you can see in the above sequence, in order to record your Spaces chat, you need to first switch on the ‘Record Space’ toggle in the set-up process. Participants will be able to see when a chat is being recorded with a red ‘Rec’ indicator in the top left of the main Space screen, with the host able to stop recording at any time during the chat.

Once your recorded Space is complete, it will be available for public playback on Twitter for 30 days, while hosts will also be able to download the audio of their Space, which they can then edit into a podcast or smaller audio clips to help promote upcoming shows and content.

The update marks the latest shift for audio social platforms, which originally gained significant appeal, at least in some part, due to their ephemeral nature, with Clubhouse rising as an alternative for spontaneous, in-person catch-ups, which have been off the cards due to the pandemic. Recording those chats changes the dynamic, but it also adds more functionality to the option – though hosts do also need to remain considerate of their speakers when recording their sessions for re-use.

Despite fluctuating interest in the option, Twitter continues to emphasize Spaces as a key growth element, as it looks to new ways to build its audience, and maximize user engagement in the app. The platform has increased its development velocity, and rolled out a range of new features in recent months, though it’s fair to say that many of them have fallen short of expectation, and haven’t caught on with users in any major ways as yet.

It’ll be interesting to see if Twitter’s approach changes under new CEO Parag Agrawal, who took over from Jack Dorsey back in November, and whether Spaces discovery can be improved or maximized in order to build the audio platform into a bigger consideration.

There’s still a lot of potential in audio social, and real-time engagement in the app, but there are challenges to, and if Twitter can’t find a better way to moderate and highlight the best of Spaces to maximize interest, it could end up going the way of live-streaming, which still has a place, and a purpose in the broader scope, but remains a supplementary, and too-often hidden element.