It’s been in testing for the past few months, and now, Twitter is rolling out its new ‘Pin Reply’ option to selected users. 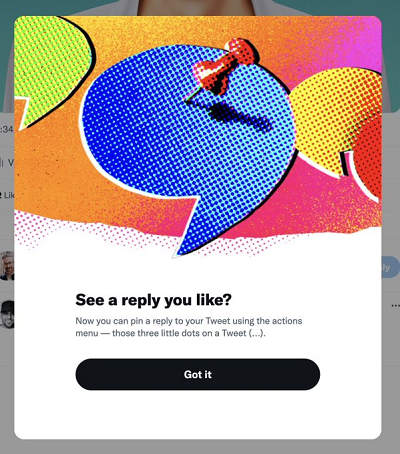 As you can see in this image, posted by Chris Messina, some Twitter users are now seeing this new notification when they log into the app, alerting them to the new Pin Reply option.

Which is the exact same alert that app researcher Jane Manchun Wong found in Twitter’s back-end code earlier this month, indicating that a full launch is likely imminent.

As it sounds, tweet reply pinning will enable users to highlight a specific reply to their tweet via the three dots menu on a response. You’ll then be able to keep that reply at the top of the thread, maximizing exposure for that specific interaction.

Which could be good for highlighting, say, celebrity engagement, or to help showcase especially helpful/engaging/funny responses to your tweets, which could also guide the relating conversation. There are also a range of potential brand uses, like inviting the most creative replies to your tweets, then pinning the best response.

But most importantly, at least from Twitter's perspective, it will add another control element to your tweet experience.

Twitter’s added a range of tools on this front over the past year, from reply controls to Communities to removing yourself from a tweet conversation. Twitter’s working to give users even more capacity to manage exactly how they engage and interact within the app, and pinned replies would provide another small enhancement in this context.

It’s not a game-changer, by any means, but it could be an interesting addition – and it looks to be coming to more users very soon.

"We're always exploring ways to make it easier to find the best and most relevant content on Twitter. This is one way we’re testing that, and we’ll share more in future."