Halloween is coming, and that means that brands are looking at ways they can tap into the rising Halloween conversation, and maximize their exposure by latching onto trending hashtags.

And this week, Twitter has provided some notes to help you maximize your Halloween tie-ins on the platform - and within them, there are a couple of hidden gems of information, which likely apply to your tweet strategy beyond the event itself.

You can read Twitter's full outline (with examples) here, but below is a rundown of some of the key points:

Twitter says that relevant hashtags are an essential for your Halloween tie-ins, and the key Halloween tags to use this year are #Halloween, #HappyHalloween, and/or #Halloween2019.

This is a fairly straightforward and simple strategic point - if you want to get your tweets into a trending stream you need to use the right hashtags, and these are likely to be the most common conversation points.

But you do need to do so with some level of restraint - which leads to Twitter's next key point.

"Although it may be tempting to fill your Tweet with trending hashtags, studies show that less actually is more. Internal Twitter research shows that Tweets with 1-2 hashtags gain 100% more engagement - so try to limit your usage."

One hundred percent more engagement on tweets whish include 1-2 hashtags. That's a fairly compelling data point, which as noted, would apply beyond Halloween alone.

While it makes sense that adding more hashtags would theoretically give you more opportunity to show up in relevant Twitter searches and discussion streams, the research, from Twitter itself, shows that 1-2 hashtags per tweet is the best way to go.

Definitely a key note to keep in mind in your process.

3. Do tap into existing trends

Twitter also advises that brands should look to use trending hashtags, like those noted in point 1, to join in on a larger conversation. But don't forget to tie it back to your brand.

Twitter provides this example to illustrate the point - where Chopt has used the relevant Halloween hashtag, it's also sought to tie into the theme of the event, as opposed to adding the tag solely to gain more attention.

Even our salad dressed up this year ????#HappyHalloween pic.twitter.com/DAFhFJnrpd

Then again, that tweet didn't do particularly well, which may highlight the need to go a little deeper with your marketing tie-ins, as opposed to tacking onto the trend with a basic image.

Either way, if you are going to use a trending hashtag, make sure that your tweet content is also relevant to the conversation, or you can just as easily get lost in the stream.

4. Don’t be afraid to create a custom hashtag

"If you’re creating your own Halloween-specific campaign or challenge, use a custom hashtag so your followers can easily follow along."

Custom hashtags can make it easier to track campaign performance, and while it can be hard to gain momentum for your own, dedicated tags, a relevant tie-in, including a specific campaign or competition, could help to spread the word.

5. Do use Halloween hashtags in advance

Twitter also recommends using Halloween-themed hashtags "in the days and weeks leading up to the big day."

That aligns with Pinterest's guide to seasonal events, which shows that Halloween related discussion on its platform actually starts in August. 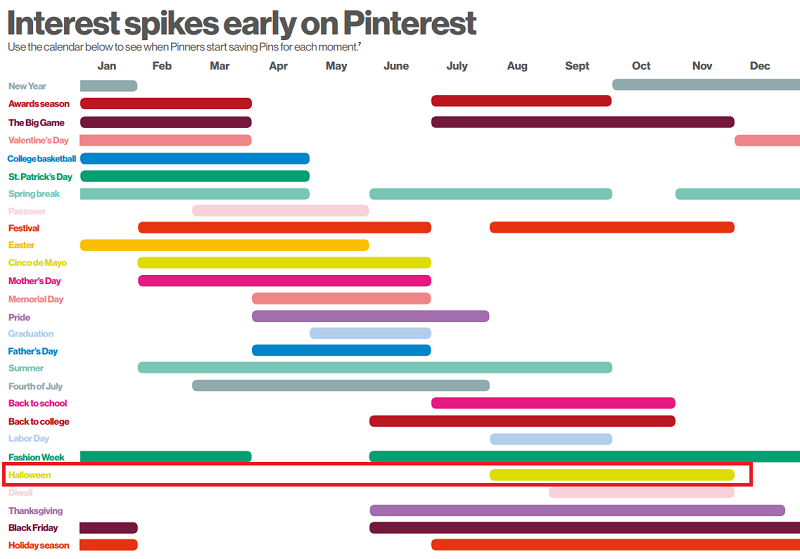 Given the real-time nature of Twitter, the same discussion wouldn't necessarily begin so early, but it does show that people are thinking about the event earlier than you might expect, and getting in on that rising trend can be beneficial.

There are more pointers and examples in Twitter's full post, some valuable considerations to keep in mind for your Halloween planning.

You can check out Twitter's full "Dos and don'ts of Halloween hashtags" post here.