With the global COVID-19 vaccine effort now underway, Twitter's stepping up its efforts to stop the spread of vaccine misinformation with new labels for tweets identified as containing misleading claims, and a new strike system to suspend, and even permanently ban, repeat offenders. 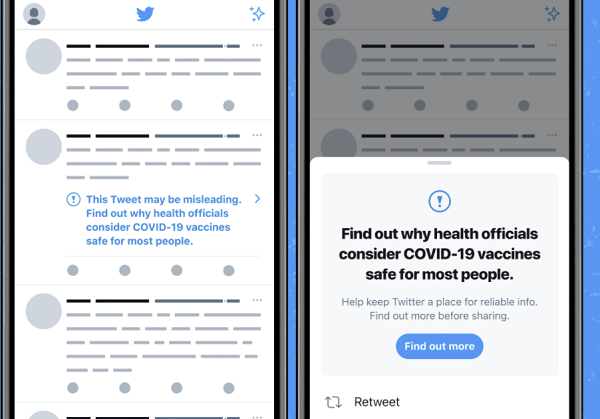 As you can see in these mock-ups, the new warning labels will highlight tweets that Twitter's team has identified as containing questionable claims about the vaccine. When users attempt to share a tweet with a potentially false claim, Twitter will prompt them to 'Find out more' by tapping through to its COVID-19 Information Center.

"Labels will first be applied by our team members when they determine content violates our policy. Those assessments will be used to further inform our automated tools and to advance our proactive capacity to identify and label similar content across the service. Our goal is to eventually use both automated and human review to address content that violates our COVID-19 vaccine misinformation rules."

These added points of friction have made many users reconsider what they're sharing, slowing the spread of questionable claims. Twitter's added prompts on retweets of articles, for example, have prompted users to open and read articles before sharing 40% more often.

By disrupting the common process, that can often be enough to prompt a different approach. But not always, which is why Twitter is also upping its enforcement process for false claims.

On this front, Twitter will now employ a strike system to deter repeat offenders of its rules.

"Through the use of the strike system, we hope to educate people on why certain content breaks our rules so they have the opportunity to further consider their behavior and their impact on the public conversation. Repeated violations of the COVID-19 policy are enforced against on the basis of the number of strikes an account has accrued for violations of the policy."

From now on, Twitter's strike system will result in rising punishments for those who break the rules:

That's a fairly rapid escalation, but users will have several chances to reconsider their behavior. Users will also have the opportunity to appeal their strikes and suspensions, as normal.

It may seem like a harsh approach in some respects, but Twitter, like all the major social platforms, plays a key role in connecting people to information, and as such, there is at least some level of onus on the company to ensure that accurate, reliable information is made available, where possible. That then leads into the question of free speech, and regulating what people can and can't say online. But in the case of COVID-19, which has had such devastating impacts around the world, the case for vaccines is much stronger than any counter-argument.

Twitter's new labels and enforcement actions are now in effect.