Twitter Rolls Out Profile Search to More Users, an Easier Way to Search for a Specific Users' Tweets

This is a handy addition – today, Twitter has expanded the rollout of its on-profile search option, which enables you to conduct a keyword search of tweets from a specific user, direct from their profile page. 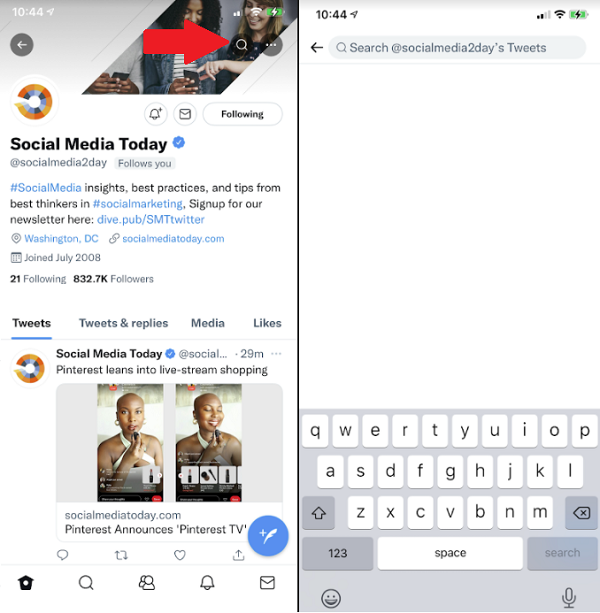 As you can see in this example, now, when you tap on the magnifying glass icon in the top right of the profile, you can search that users’ tweets specifically, with the additional search qualifier then automatically built into your search.

Which, functionally, is no different to either manually entering the handle in the same way, or using Twitter’s advanced search filters to find somebody’s past tweets. But it makes it a little easier, and as noted, it could be a handy addition to your tweet process.

But it could also make it easier to find someone’s questionable old tweets. As such, now might be the time to re-check your old Twitter takes, in case someone feels like running a search for certain keywords on your past inferences.

Twitter’s been testing the profile search option over the past few months, with some users highlighting it in testing recently.

Twitter ???? search user’s tweets button on profiles is now available (for some users)

But now, it appears to have gained a much broader roll-out, with many Twitter users noting the change.

We’ve asked Twitter for more info on the option, and the expanded roll-out, and we’ll update this post if/when we hear back. But right now, it looks like if you update the Twitter app, you’ll see it on profiles, streamlining your tweet discovery process.

UPDATE (11/5): Twitter has confirmed that its new profile-specific search is in the process of being rolled out to all users:

"We recently started testing on a new search icon that we’ve added to all profile screens making it easier for people to find Tweets by a specific user. This is now available to all global users on iOS and will continue to slowly roll out to others on Android and web."