Twitter Rolls Out Spaces Analytics to All Hosts and Co-Hosts

After first testing them with selected creators over the last month, Twitter has now announced that all Spaces hosts and co-hosts can access full Spaces analytics. 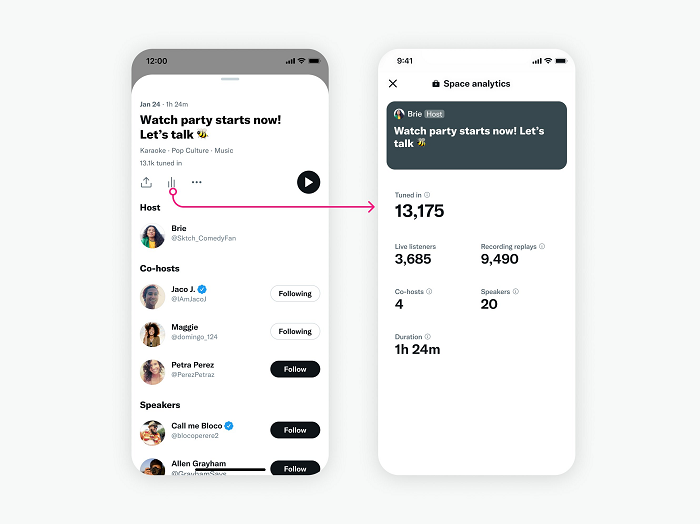 As you can see in this example, the new Spaces analytics tools include data on the number of people that tuned-in to your broadcast, the total speakers in each session, replay counts, duration and more.

The improved data insights could be a big help in incorporating Spaces into your broader tweet strategy, with more info to go on when planning out your audio content, and seeing whether it shifts the needle in terms of reach, community building, engagement, etc.

It’s still hard to say how beneficial Spaces might be. The Clubhouse-led audio social trend has largely died down now, and I don’t personally feel like Twitter has advanced Spaces or Spaces discovery to the point where it’s a major component of the platform, or a big consideration in Twitter strategies.

But some brands and people would be generating good results from Spaces broadcasts, and if you’re able to maximize engagement with the format – maybe as a supplement to a monthly Twitter chat, or a regular Q and A, or to provide insight into your business process – then there could be potential here. Additional data on exactly how valuable that potential is will definitely help in this process.

On another front, Twitter’s also looking to help Spaces hosts maximize their engagement as a result of their audio efforts.

after a Space is over, you’ll now see a list of the co-hosts and speakers with the option to follow them. Rolling out on Android, iOS soon!

That could provide another lure for potential broadcasters - or at the least, it could help users glean more value from Spaces sessions, as part of their broader Twitter engagement efforts.

What the future holds for Spaces, and Twitter more broadly, is unclear, and it wouldn’t be an entire surprise to see incoming Twitter owner Elon Musk scrap the format entirely as part of his looming cost-cutting measures.

It does feel like Spaces adds a level of value, but then again, looking through the Spaces tab, there are not a lot of people tuning in to each session, and it does seem to be losing priority amid the platform’s other updates and features.

But maybe, there is a fit there, and there could even be more potential, if Twitter can get its topic matching right, and highlight the most relevant Spaces to each user as their in progress.

Twitter’s never been great at this aspect (see also: live-streaming), but maybe, as things change at the app, Spaces too will see new life.

Till then, you have new analytics to experiment with, and glean more insight into your Spaces performance.