If you're active on Twitter, you're no doubt at least somewhat aware of the popularity of K-pop, or Korean pop bands, on the platform.

K-pop fans regularly jump into a range of hashtags and discussions, sharing GIFs and clips of their favorite performers, which can sometimes seem random and out of place. Yet at the same time, the K-pop community has also become known for their social activism, clogging trending hashtag discussions in order to counter certain movements.

Whether you're into K-pop or not, it's clearly a key Twitter trend, and this week Twitter has shared some new data on the evolving K-pop conversation, which resulted in a record 6.7 billion K-pop related Tweets throughout 2020.

K-pop is one of the biggest discussion trends on Twitter overall, with pop group BTS heading the list of the most tweeted about musicians for the year

The popularity of K-pop among the Twitter audience is also not confined to any particular region, with K-pop fans chiming in from all over the world. 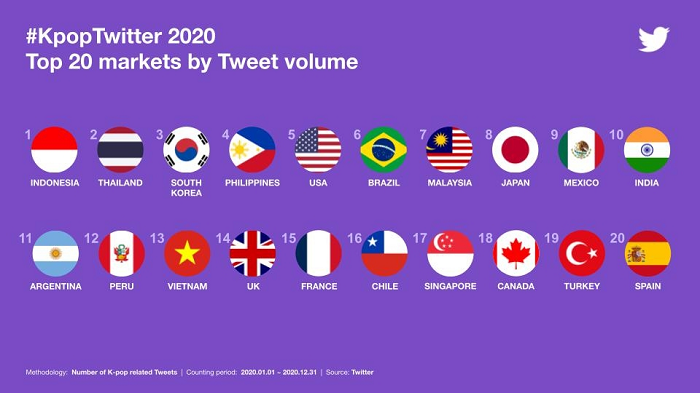 That, as noted, has resulted in a hugely influential community of interconnected users, who now regularly mobilize to counter trending discussions across the world.

For example, K-pop fans recently flooded hashtags like #MAGA and #StopTheSteal with memes, GIFs, and videos of their favorite K-pop artists. That then makes it more difficult for these discussions to gain traction, essentially forming a sort of digital vigilante attack on certain trends.

This is now a regular occurrence for right-wing hashtags, with the conversation railroaded by K-pop tweets. That's no doubt frustrating for those looking to engage in such discussions, but that, of course, is the point, with the K-pop community looking to thwart efforts to spread hate and division.

Among K-pop royalty on Twitter, BTS, as noted, still leads the way 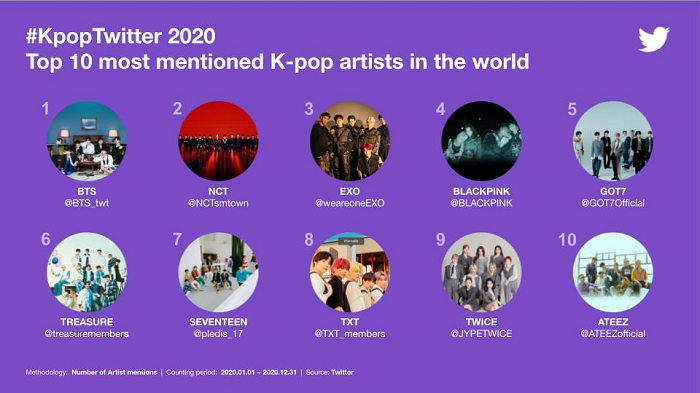 It's amazing to consider the scope of the K-pop chatter, and its influence on Twitter trends overall. This is also a key consideration for Twitter more broadly - with such a dominant fan community, Twitter needs to cater to this audience to maintain engagement, and maximize the discussion to keep them coming back.

For brands, if you have a K-pop angle, the numbers here show that Twitter should be a key platform of choice for your promotions. But if you do have a K-pop angle, you would have known that already - while for others, it could be worth considering whether you can reach this cohort to boost your brand.

You can read Twitter's full K-pop report for 2020 here.