Twitter is developing a new, variable audience control option for tweets that would essentially enable you to share tweets with a specific group of chosen contacts, like a group or community, though more specifically defined by your personal selection. 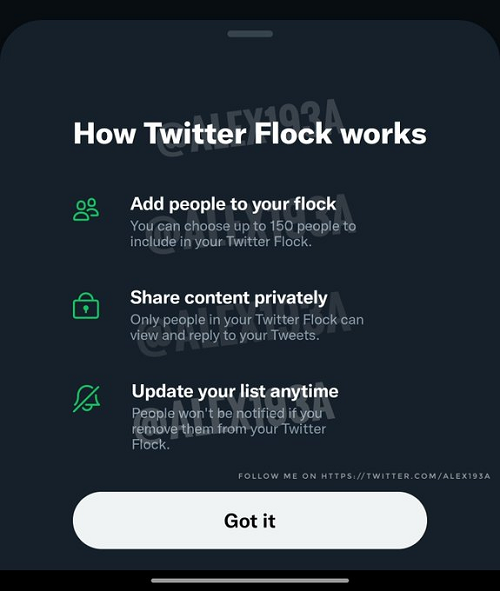 As you can see in this screenshot, posted by app researcher Alessandro Paluzzi, Twitter is calling this new option ‘Flocks’, which would enable you to select your ‘Flock’ of chosen Twitter users to be in your group that you can post specific tweets to.

You would be able to choose up to 150 people to include in your flock, so the audience size here is relatively big for an enclosed group, with your flock then coming up as a posting option when composing your tweets. 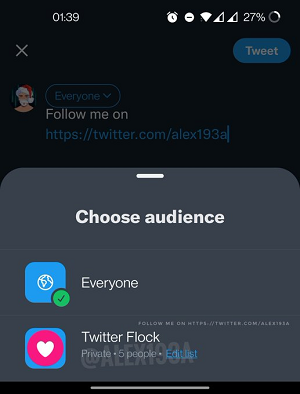 Members of your flock would then be alerted that the tweet has only been shared within the group with a marker on each flock tweet. 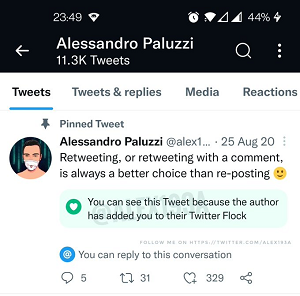 It’s essentially an extension of Twitter’s reply control option which it launched back in 2020, enabling users to decide who can see and respond to each of their tweets, while it also leans into the more enclosed discussion use case that Twitter’s looking to boost with its Communities option.

Communities enables users to segment their Twitter audience, so that you can share more specific discussions with specific groups, as opposed to broadcasting everything to all of your followers all the time, and that, ideally, will open up more opportunity for Twitter users to engage with a broader range of topics, as they won’t feel constrained to post only what they think their established audience will respond to and like.

Which could open up new potential, and Flocks could add another perspective, with the capacity to further separate your tweet audience and discussion into different groups.

Twitter previewed the coming option in July last year, though it was then called ‘Trusted Friends’. 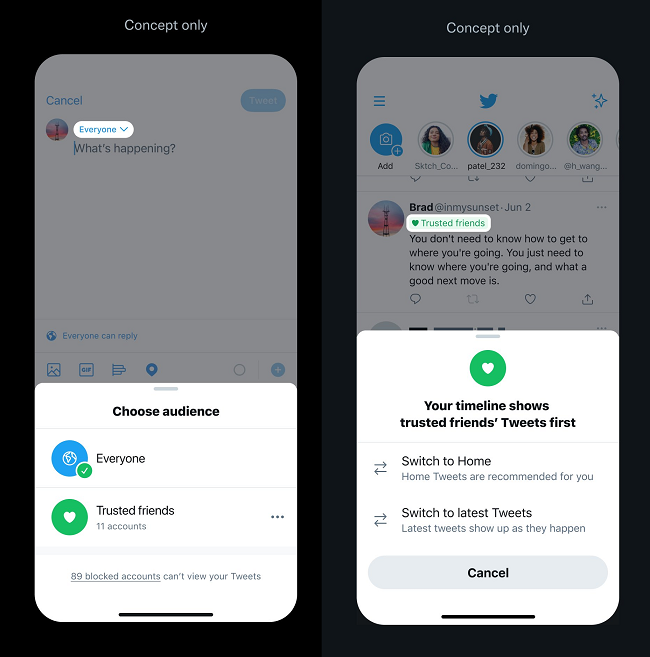 As you can see here, the other element of Trusted Friends – now ‘Flocks’ – would be that their tweets appear first in your timeline, which could be an even more significant element, if it does eventually get launched.

If Twitter were to prioritize Flock member tweets, you can bet that ‘growth hackers’ would be looking to jump on that, and get themselves added to as many ‘Flock’ lists as they can, in order to maximize tweet reach.

But the true value of the option, overall, is somewhat debatable.

I mean, right now, most users likely conduct the discussions that would fit into Flocks in their DMs instead, maintaining group chats with their close friends in a more private space. That privacy enables people to feel more comfortable sharing, and there doesn’t seem like much reason for them to switch those conversations to the potentially more exposed Flocks option instead.

Twitter users also have lists to stay in touch with their most important connections – or they can just whittle their Following list down to the most important profiles - so there’s no real, practical value or need for Flocks, as such, given that all of the functionality for it already exists in different forms.

But then again, maybe it adds something – maybe, by having a more convenient, immediate sharing option within the tweet composer flow, that would be more helpful in prompting more specific engagement, while it would also add a level of exclusivity and intimacy to your Twitter chats.

But it would also be another step in the partitioning of the Twittersphere. For example, if Flocks were to be launched, you would then have variable controls for who can see your tweets (everyone, those in your Flock, or those in communities that you’ve joined), variable controls for who can reply, Super Follower tweets for only those who’ve paid to see them, private Spaces, private chats, etc.

There are more and more options being added that move tweets out of the public sphere. Which may well be a good thing, but as these new tools get added, they all contribute to a significant shift away from the public square ethos that the platform was originally founded upon.

Which could, again, be a positive, but it does seem like most people already have established uses for each social and messaging app, and that Twitter, in general, is not where you would need to conduct these conversations.

Maybe it needs those options to cater to such, or maybe they’ll end up seeing little use, like Fleets, and Twitter will try them for a bit then move on.

Either way, it’s another consideration, and from the looks of the latest test, it seems like it could be coming soon.