Twitter's Rolling Out its New 'Bookmarks' Feature to All Users

Twitter has announced that it’s rolling out its new Bookmarks feature to all users, after first announcing the coming update back in October last year. 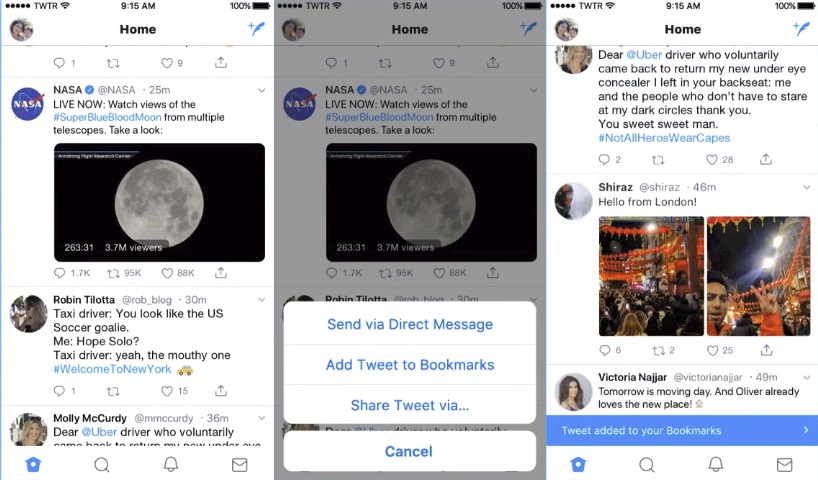 Bookmarks provide an alternative to liking a tweet that you might simply be marking as something you want to check out later (instead of actually liking it). As you can see from the above sequence, to tag a tweet for later reference, you click on the new ‘share’ icon below the tweet, then select ‘Add Tweet to Bookmarks’. When you want to go back to it, you select the ‘Bookmarks’ option from your profile settings - here’s a look at the process in action.

Found something historic?
Don’t want to forget a joke?
Article that you want to read later?

Save the Tweet with Bookmarks, and come back to it whenever you want. Only you can see your Bookmarks. pic.twitter.com/fM2QLcOYNF

As a process, bookmarking will serve a couple of different purposes for Twitter.

First, covering the obvious, Twitter says users have been calling for an option to ‘easily and privately save tweets for later’ for some time - particularly users in Japan. Aside from liking a tweet for later reference, users have also been DM-ing tweets to themselves, or even re-tweeting, just to have them on record. Bookmarking solves this in a simple and effective way.

It’s worth noting, too, that Facebook’s save option is used by more than 250 million people every month, so there would definitely appear to be demand for a similar Twitter tool.

In addition, Bookmarking will also help improve Twitter’s algorithm to ensure that they show users more relevant tweets. Twitter’s machine learning systems take into account user actions - including Likes and re-tweets - to measure what’s of relevance to each person, and therefore, what they likely want to see more of. If people are liking tweets that they don’t actually like, that’s probably putting their systems off track. By removing, or minimizing, that as a variable, Twitter will be able to better customize their systems to each users’ interests.

But it does also introduce another issue for social marketers, at least at this early stage – in its current state, Twitter won’t be able to show how many users have bookmarked or shared a tweet, as this is not currently built into their analytics tools. No doubt Twitter will rectify this as time goes on, but it’s another consideration for those closely watching their Twitter metrics (it may also explain why you might see a sudden drop in average likes).

As noted, Twitter’s been working on Bookmarks for the last few months, and has incorporated user feedback into the process to make it more effective.

“We Tweeted ongoing updates as we built Bookmarks so we could incorporate your input as we worked. By working this way, we learned that you like to save replies so you can answer later and that you may share a Tweet hours or days later after you’ve bookmarked it. Thank you for being part of this process — your feedback was valuable in building this update, and it made it all the more fun for us as we built a new feature for you. As a result, we all have an easier way to save, share, and stay informed.”

Those changes seem relatively minor in the broader scheme, but it’s interesting to see Twitter working with user feedback as part of their update process, something that they could look to incorporate into future enhancements. Adding a level of collaboration could help users feel more a part of the improvement process, and thereby greater align them to the platform – though, of course, the most requested Twitter feature, the ability to edit tweets, is still nowhere to be seen.

Bookmarks are rolling out globally on iOS and Android, Twitter Lite, and mobile.twitter.com – no desktop support for the function as yet.