While Instagram is the social platform of the moment, reaching a billion active users last year, and seeing 500 million daily Stories users, an ongoing concern among businesses looking to tap into that growth, and build their on-platform audience, is that Instagram, which is owned by Facebook, may eventually go down the same path that Facebook has, and reduce Instagram business page reach, pushing brands towards its paid ad options.

Over time, Facebook's main app went from enabling businesses to reach every user who'd Liked their Page, to reducing that capacity, bit-by-bit. Facebook's motivation, it said, was to improve the user experience - as more brands came on board, users were getting flooded with brand content, drowning out updates from their friends and family and reducing the utility of the app.

That makes sense - if you're not seeing updates from the people you care about, you'll likely care about the app itself less as a result. But it also, conveniently, plays into Facebook's broader business strategy, reducing organic reach after many businesses had built a reliance on Facebook traffic. That forced a lot of them into paying for reach, essentially trapping them into Facebook's business eco-system.

These days, most Pages are lucky to be reaching single-digit percentages of their Facebook Page fans. Is that how it will play out on Instagram as well?

Doubling Down on Ads

This week, such concerns were highlighted once again on the back of reports that Instagram has significantly ramped up ad exposure within the app.

According to a report from The Information, Instagram, under pressure from Facebook, has doubled the amount of ads shown in the app over the past year. That's also lead to Instagram looking for more ad placement options - back in June, Instagram added new ad units in its Explore feed, while this week, reports have suggested that Instagram will begin a new test of back-to-back ads in Stories, further pushing its revenue generation potential.

What the impacts of that will be on the user experience is hard to say - the current variation of Explore ads are not overly intrusive, while back-to-back, skippable Stories ads might also not be a big deal. But then again, if monetizable ad exposure isn't improving, Instagram will still need to find other options - even if these additions don't work as planned, there's going to be more ads coming to your Insta feed.

But what does that mean for businesses looking to make best use of Instagram? If Facebook is putting more pressure on Insta to, as The Information says, 'earn its keep', how will Instagram respond?

That's where the next shift may be coming - and it could just be what businesses have feared.

If Instagram really wants to increase ad spend, it has a way to do it - by reducing organic reach.

Whispers of reach reductions are already rising among Instagram users - back in January, the company released an official statement debunking a viral rumor that it had been actively restricting the reach of posts to 7% of a profile's total following. 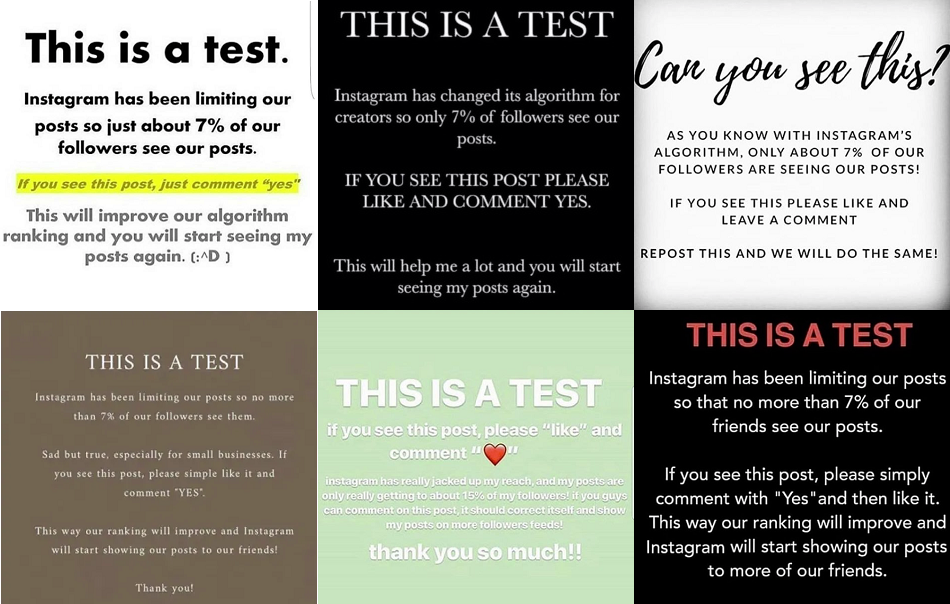 Many of these rumors stem from the aforementioned concerns relating to Facebook's business Page reach reductions, and the fact of the matter is that Facebook does provide Instagram with a template for how it could push businesses towards ads.

Some studies have indicated that there most definitely has been a decline in reach for business pages on the platform already - according to a report from Trust Insights, published last month, average Instagram engagement rates for brand accounts are clearly on the decline. 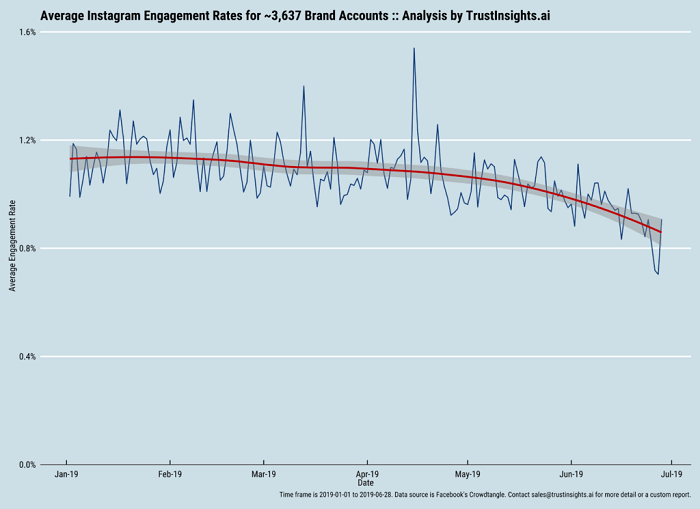 As noted at the top of the chart, Trust Insights analyzed 1,430,995 posts, from 3,637 brand profiles (Stories were not included) in order to ascertain the overall average engagement rate.

Some level of reach decline is, of course, logical, given rising competition within the app - but does that point to Instagram slowly shifting towards the Facebook model?

That last step doesn't say anything about limiting the second, but it makes logical sense, and the specific note of 'free of charge' suggests that, at some stage, brands are going to have to pay. That stage may actually be the fourth element - 'limit organic activity in order to maximize revenue potential'.

Essentially, it's pretty much expected that Instagram will eventually reduce business page reach, but what the exact impacts will be, and how fast that will happen, are impossible to determine. But maybe, given the reports of increased pressure on the app to pull its weight from a revenue standpoint, we're already seeing this shift.

What does that mean for your Instagram strategy? For one, I wouldn't build too much reliance on Instagram traffic. More traffic is always better, of course, but you can likely expect to see your Instagram referral traffic decline, so better to plan for that now rather than accepting any current levels as the norm, and forecasting based on such.

Influencer marketing should also be on your radar - while business page reach may decline, working with relevant influencers could be a means to limit the impacts, while also building an alternate avenue into your Instagram promotion. If you establish a template for an influencer program, you can translate that to other influencers over time, ensuring that you're able to maintain reach on the platform through rising voices.

But really, overall, the main tip is to manage your expectations, and understand that such shifts can, and most likely will be coming. That's not to say you shouldn't use Instagram - you definitely should where it's of benefit. But it's important to do so in the understanding that any results you see may well be temporary. And as such, you need to establish other avenues, rather than building your foundations on rented land.