YouTube has announced that it’s opening up its ‘Go Live Together’ option to more users from next week, which will provide more creative considerations for your live-streams in the app. 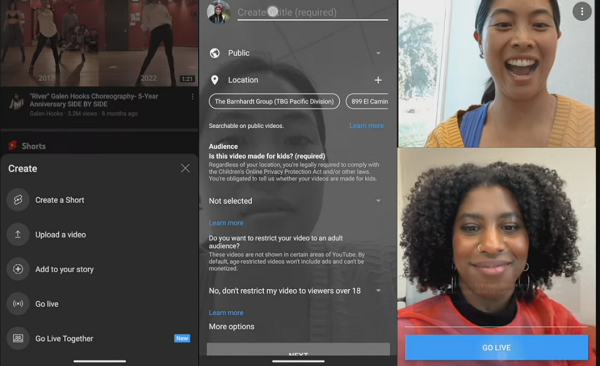 YouTube began testing Go Live Together with selected creators back in March, and it’s now looking to take it to the next stage.

As you can see in this sequence, Go Live Together enables you to invite another YouTube user to your stream, with the video then displayed in vertical split-screen, providing new engagement and interaction options during a YouTube live broadcast.

That could open up new opportunities for brands to run live interviews or internal spotlight sessions on their YouTube channel, while also facilitating Q and A sessions and other options to build engagement among your YouTube community.

Hosts will be able to rotate the guest on their live-stream, but only one guest at a time will be able to take part in the broadcast. Which is less than TikTok (which recently expanded live-stream guests to five) and Instagram (three), but even so, it still adds new creative considerations for your YouTube live broadcasts.

The host will be able to screen guests before going live, while the guest channel and user information will be hidden during the stream.

YouTube will also allow pre-roll, mid-roll, and post-roll ads on Go Live Together streams, which will be attributed to the host channel of the broadcast.

YouTube says that all channels with at least 50 subscribers will soon be able to launch Live Together streams, with the roll-out beginning next week – though YouTube does note that it may take a few weeks to become available to all users.