YouTube has launched a Valentine’s Day push on its TikTok-like ‘Shorts’ option which encourages creators to express their appreciation for their audience via short clips.

As you can see here, YouTube’s calling on creators to share the love on Valentine’s Day through a custom Shorts background, which you can download here. 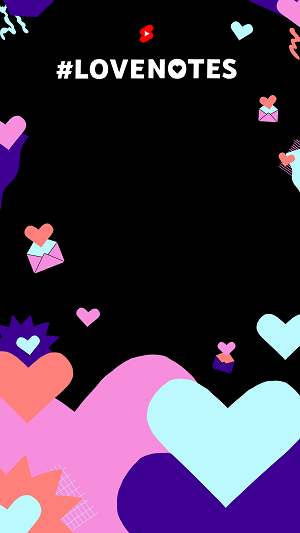 You can then share your message, using the hashtag #LoveNotes, to join in the broader expression of appreciation via Shorts clips.

Which have become a key focus for YouTube, as it works to maintain its position as the online video leader, with TikTok continuing to gain traction, and increase its audience share.

Last month, YouTube reported that Shorts has now surpassed 5 trillion all-time views. And while that’s not the same as monthly active users, or individual user engagement, it does underline the rising interest in short-form content, which YouTube’s keen to build on as it works to hold onto its crown in the space.

But where YouTube is specifically looking to beat out TikTok is that it’s seeking to use Shorts as a supplementary channel for each creators’ main feed in the app. And with creators able to make a lot more money from YouTube clips than they currently can on TikTok, that push, along with its comparable view counts, could end up being a big winner over time, by bringing more creators across to YouTube instead.

It’ll take time to play out, and TikTok’s working to develop its own monetization tools and options to provide a comparable, equitable revenue share system for its users. But it remains the biggest threat to TikTok’s ongoing momentum – if more creators eventually determine that they can make more money for the same, or similar content on YouTube and Instagram instead, that could eventually see more of them migrating away from the app, and taking their big audiences with them.

That’s what happened to Vine, which couldn’t work out how to monetize short-form content. It could still happen to TikTok too – which is why TikTok’s also looking to shift into longer form content, in addition to its experiments with eCommerce, creator tipping, facilitating brand deals, etc.

And with TikTok also now facing a new wave of creator dissatisfaction in relation to its Creator Fund program, it needs to work fast, or more of them will indeed either stay with YouTube exclusively, or move on from the app.

A large-scale creator exodus from TikTok seems unlikely at this stage, given the app’s huge momentum and influence. But it is possible, and YouTube’s working to build in more tools to beat TikTok on this front in order to press its advantage.

YouTube generated $28.8 billion in ad revenue in 2021, with around half of that going back to creators through its Partner Program. That’s a huge chunk of change, fueling its content ecosystem, and right now, TikTok is nowhere near that same level, despite rising interest.

Can it get there – or will that eventually become a major tipping point for the app?

We’ll have to wait and see, but it’s interesting to consider how YouTube is looking to play its hand in the battle for online video supremacy.