Twitter has made no secret of the fact that it's banking its future on video. Stats show that more than 91% of internet users will be simultaneously be using the internet, in some form, as they watch TV by next year, and Twitter's looking to tap into the second-screening trend by being the screen, the sole provider of both functionalities.

Providing the the ability to watch live, exclusive programming on one hand, combined with the capacity to interact, to comment and share in real-time, aligns with audience behaviors - but actually making that connection a reality is another thing. And then there's also the challengers, with both YouTube and Facebook looking to do the exact same thing.

But Twitter is still where more TV-related conversation happens, as people want their comments to be public, they want to be part of the wider discussion and community. This is where Twitter sees opportunity, and in a new report published this week, they've further sought to underline the platform's video potential.

By 'people' here, they mean 'live video viewers' (as we all know users aren't flocking to Twitter in record numbers).

"With more than 200 premium partners, including top TV networks, major sports leagues in the US, publishing houses and magazines, and professional news outlets, Twitter is the prime place to tune into watch video. Most importantly, it's the place for brands to reach a receptive, leaned-in audience and make a global impact with approximately one-third of unique viewers tuning in from outside the US."

This is an interesting point - Twitter's video audience is global, presenting opportunity beyond what you might normally consider with TV-style outreach. Now, of course, not every brand wants to reach a global audience, but it's a note worthy of consideration either way - though at the same time, Twitter did just give up the NFL broadcast rights, one of their biggest live video partnerships, with Amazon swooping in to take them over.

"In Q4 2016, 31 million unique viewers tuned in on Twitter to stream more than 600 hours of live premium video from content partners across roughly 400 events."

Twitter's been working to build out their portfolio of live video offerings, as well as new tools and options to raise awareness of live content and boost engagement. And while some of these may seem somewhat niche (as noted above, 10.3 million users watched the recent Halo World Championships), it's in those niche offerings that Twitter can provide value.

You may not be interested in the Halo Championships, but a very passionate, focused group of users are - groups which can be targeted with very specific ad content aligned to what they're likely to care about.

The trick here, of course, is volume - if you can't reach everyone, you need to be able to reach a lot of highly focused groups. Hence, Twitter covered 400 events, and will cover a heap more moving forward.

Twitter's audience consumes around 50 hours of live programming per week, half of which is regularly scheduled programming. Twitter's been working to make deals with a range of video providers to secure regular programming, and those efforts would appear to be paying off. Just as with the above noted variety, consistency is also key.

Reaching a unique user group is great for a one-off event, but what if advertisers see great response to their ads during that broadcast? They'll want to do the same again. Regular programming is a key compliment in this regard.

Twitter also notes that most of their video audience is younger users, with nearly half their viewers under the age of 25. While that's no surprise - younger users are more tech-savvy and more likely to consumer video content via online platforms - it's a key part of the wider TV shift, and of the opportunities of Twitter's video ad offerings in general

Last week, Twitter announced the addition of mid-roll video ads, which they've repeatedly re-iterated are 'brand safe' in an attempt to distance themselves from YouTube's recent issues with ads being shown against questionable content.

Mid-roll adds another video outreach tool to their available options. 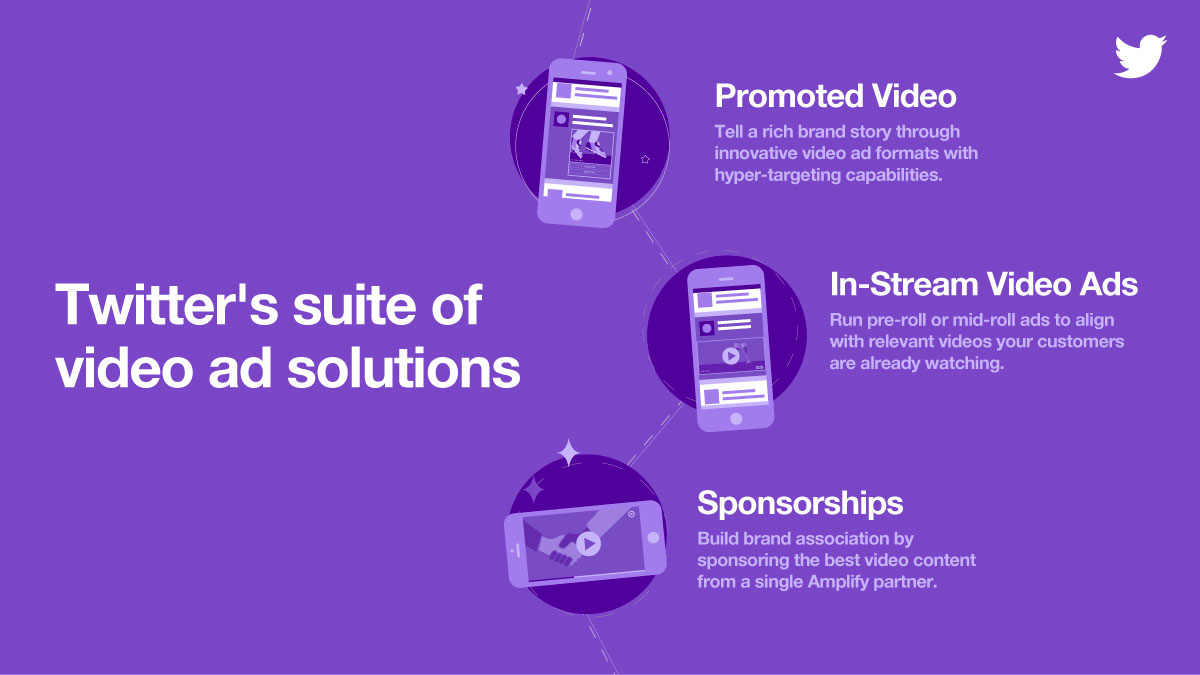 Twitter says that ads during premium live events have completion rates of more than 95% - which makes sense - if you're tuning in for a live event, you're not going to switch because of an ad (though you'll probably be checking your other social feeds as it runs).

The data is based on Nielsen Brand Effect research and underlines the potential of video content. Of course, you still have to create good video content - creating just any video likely won't help, but the numbers show that people are open to video content on Twitter, and are receptive to brand messages.

Twitter also notes that 99% of Twitter video ads are viewed by human beings, according data from Moat, whom Twitter recently announced a new verification deal with.

Twitter also quotes a recent study in which they partnered with Omnicom Media Group to measure the brain activity of 127 Twitter users as they browsed their timelines and responded to different media - with video being the specific focus.

Twitter says these figures "outperform online video norms", while they also found that shorter videos work best, which is specific to Twitter. 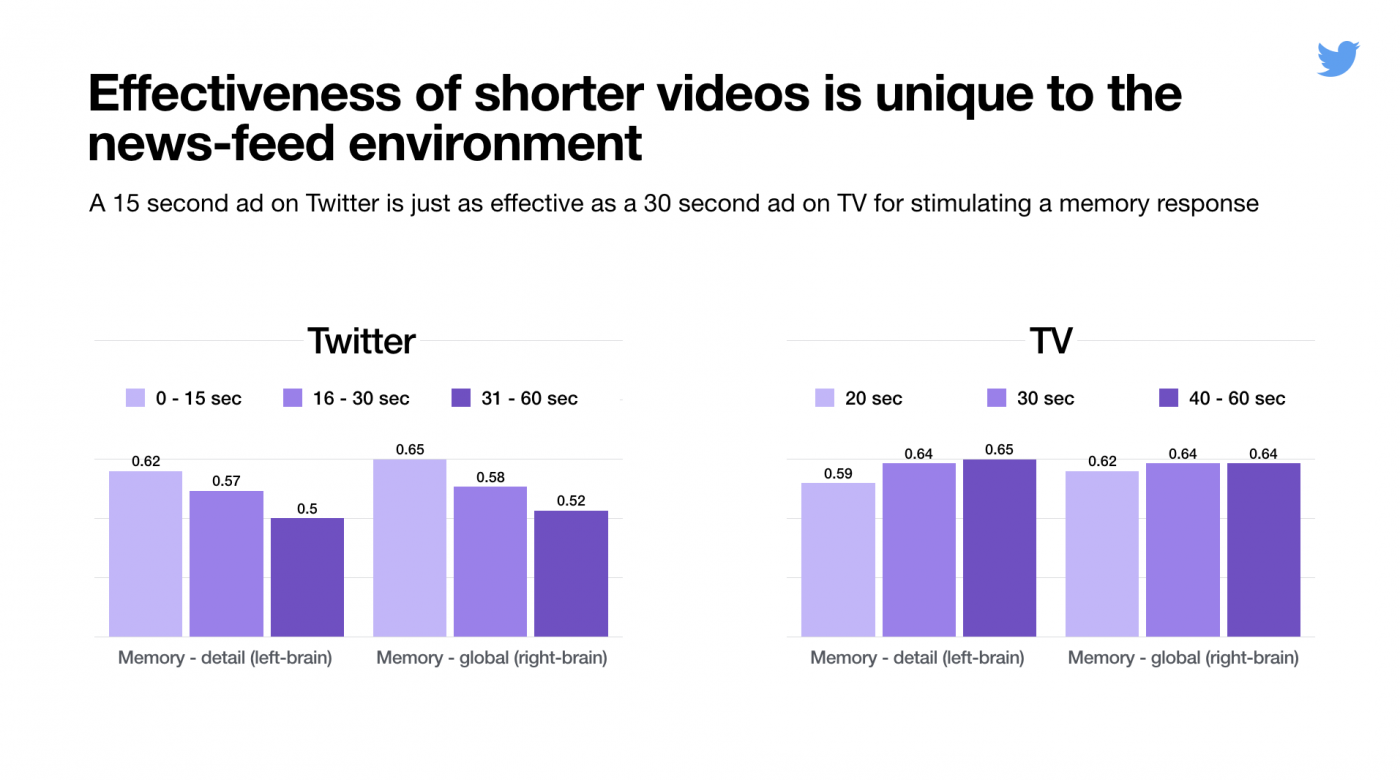 The fast-paced nature of the real-time tweet stream may make the audience more receptive to rapid delivery of information, which could help in enabling advertisers to create more non-disruptive video ad experiences.

Twitter also says that the same video ads on Twitter are 2X as memorable vs. other premium video platforms.

It's not just what you see, but what you remember. That's the pic.twitter.com/FAByMdc9rV

There are some interesting stats here - while much of the wider video focus is on Facebook, and their unmatched audience reach and targeting potential, Twitter, through more niche focus and attention, may actually be building an equally effective targeting engine. It'll take more work for them to do so, and they'll need to broadcast a lot of events to make it a viable option at scale, but their tactic in focusing on smaller audiences could provide significant value in the long run. If they can make it work.

It's worth keeping an eye on Twitter's expanding video broadcast catalog and considering whether there's any streams gaining traction among your target audience.