Will Facebook's New 'Reactions' be Good for Marketers?

Earlier this month, Facebook announced that users would soon be able to quickly express their responses to content on the platform with more than just a 'Like'. Soon, there'll be a whole range of emotional indicators available through the new 'Reactions' emoji-style response toolbar.

The reactions which will soon be at your fingertips are:

Notice anything that stands out? The key aspect that seems to be lacking is any kind of definitively negative emotion, a means of communicating that you 'don't like' the sentiments of a post. Sure, you've got 'Angry' or 'Sad', but overall, the options available clearly skew towards the positive. This is deliberate, of course, Facebook has made a conscious choice to veer away from an actual 'dislike' option, one of the prime reasons being that giving users the ability to 'dislike' content could lead to significantly more problems on the platform - the main one, from Facebook's perspective, being a possible reduction in Facebook use. For example, having a 'thumbs down' option would mean you could effectively cast a downvote anytime one of your connections - or anyone - said something stupid, which might ultimately lead to that person feeling less comfortable about posting, thus they stop, providing less content for Facebook analyze from that user. This is only one of many reasons why an actual 'dislike' option will never eventuate, but even in that one situation alone, the logic of Facebook's decision on this front makes sense.

Facebook's six new 'Reactions' options were developed based on two main factors - first, Facebook analyzed people's one-word comments on the platform, finding that 'haha', 'yay', 'wow' and 'sad' were among the most common. Facebook also tracked the emotional sentiment of the sticker comments people were leaving on posts. Sticker comments, the ability to add in cartoon-type images to posts, were made available to all users last year and have since given Facebook a road map of the emotions users most regularly convey through pictures. Based on these findings, Facebook developed the Reactions set - and given this, it's likely that the Reactions are largely reflective of what people want to communicate through emoji response on the platform.

But what do these responses mean for marketers and how might they be used?

If you've checked your Facebook Insights tab recently, you might have noticed this new graph, all set to go in tracking your analytics.

Facebook clearly sees analytical and insight value in Reactions, and they're giving you the tools to track them - though interestingly, Facebook made a definitive point of noting that any user 'reaction', at least initially, will be measured as equivalent to a 'Like'. So if someone clicks on your ad and selects 'angry', they'll actually increase the likelihood of being shown more of that same content, because any reaction is counted as a 'Like'. While there's really no other way Facebook could log such responses in the early stages, it raises an interesting question - if a user marks something as 'Angry', does that mean they want to see more or less of that type of content?

This is where the complexity of Reactions comes in - how do those responses actually reflect people's interests and intent? And how will marketers use that to better refine and maximize their content. We'll look at each Reaction one by one:

Like - This is obvious, and it's the default action that Facebook users are now accustomed to using to indicate their interest in content - the interpretation of Like won't change admist the new emotional depth of Reactions.

Love - You can imagine how 'Love' could be used from a marketing standpoint - getting more of this emotion clearly shows you're on the right track. Really, this is just the 'Like' amplified, and it'll probably become the new brand benchmark on the platform. I look forward to marketers presenting their results and making note of how many people 'love' their content.

Haha - It'll be good to know how your jokes are going down - if you upload a comedic post and you don't get many 'haha's, you probably need to re-think your strategy. Maybe humor's not for you. But then again, if you post something serious and you're getting a lot of 'haha' responses, you might also need to re-assess. I suspect this one will also be used to criticize, particularly in the case of spelling errors or grammatical mistakes.

Yay - This one sort of sits in between - is this really adding much when you already have 'Like' and 'Love' as options? Regardless, I guess it'll be another way to track response, and probably the one you'll be aiming for with announcements of achievements (people might not 'Love' that you won an award, but they might want to encourage you either way)

Wow - This could be used in a positive or negative way - 'wow, that's amazing' or 'wow, that's stupid'. How, exactly, it is used could be confusing - and this may be an issue with tracking emoji response in general. As you can see in the above screenshot, Insights is only going to give you a total track of responses, which could be confusing if your audience choose to use Reactions in different ways - a whole heap of 'haha's would be good, except if they were posted in a mocking way. Then you might have a whole lot that are posted as a form of critique in amongst a range that were posted as encouragement - what then? What does that data actually mean if your audience is using those responses in a mix of different ways?

Sad - The 'Sad' option will be one of the more interesting ones to track. The intended use is obvious - if, for example, someone posts about their pet passing away, it gives you a way to express your sympathies. But what if you get the 'Sad' emotion in response to a post to your business Page about a factory closure or such? Will that then signal that people want to be shown less of that content because it makes them sad? Will that then lead to Pages avoiding posting potentially 'sad' news to avoid any such reach penalty? I'd suspect that Facebook won't be able to restrict reach based on this response - in which case, what does this response mean for brands? Is it a good thing to be eliciting sad responses from your audience? Emotional reactions are what you're aiming for, but it'll be interesting to see how the 'Sad' response relates to clicks generated, and, ultimately, conversions.

Angry - And this is the one that brands will fear the most - you don't want people indicating anger at your content. Or maybe you do. Maybe causing an emotional response is what you're aiming for to generate discussion, which, in turn, would amplify reach. Divisiveness can be a unifying factor in communities and can activate brand advocates - in that case, inspiring people to click on the 'Angry' emoji might be exactly what you want. But 'Angry', too, might just be a brand's best friend in getting a feel for how your audience views your content and what people are thinking. You might come up with a great campaign, a solid, entertaining jingle or a character to represent your products. And people might hate it. If your responses are overly angry, then you might need to re-think your strategy - either way, it'll provide interesting insight as you'll be able to see how that response actually drives traffic. Maybe, for example, your new campaign might generate a heap of angry responses, but website traffic and conversions might go up at the same time. Maybe, through this, you might just find a strategy that works, even if it elicits what could've been seen as a negative response. 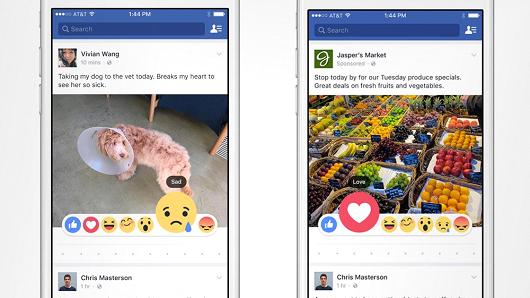 However you look at it, the actual results will require some experimentation - it's impossible to know, at this stage, how helpful or not these new variables will be. Will people be less inclined to post actual comments, for example, once they have the ability to express more responses in one-tap? Either way, the addition will raise some interesting questions, and will no doubt provide food for thought when building out your own Facebook, and even overall, marketing strategies.

The main thing that Pages should take into account early on is there will be a novelty factor - don't over-react to Reactions too soon. You're going to get random responses here and there, especially while people are keen to try out the new feature, you're going to get a wayward 'Sad' and 'Angry', maybe even an inappropriate 'Haha' every now and then. The value of data is built on wide scope - one response is isolation is largely meaningless, but a grouping of similar indicators forms a pattern, and it's in those bigger correlations where the real insight lies. It may even be worth ignoring Reactions for the first weeks, even the first months, as it'll take some time for the new process to be bedded in and to become an instinctive and indicative measure of response from your audience. Eventually though, these additional data points will start to show patterns, and will inform your future outreach choices going forward.

Take it in, analyze the notes and consider their wider meaning. Over time, the insights will starts to shine through.

Reactions are currently only available to users in Spain and Ireland, a wider roll-out is expected in the near future.