Facebook continues to underline why it's the leading social media platform in the world. The Social Network has reported its latest results, posting increases in both overall users and revenue generated. 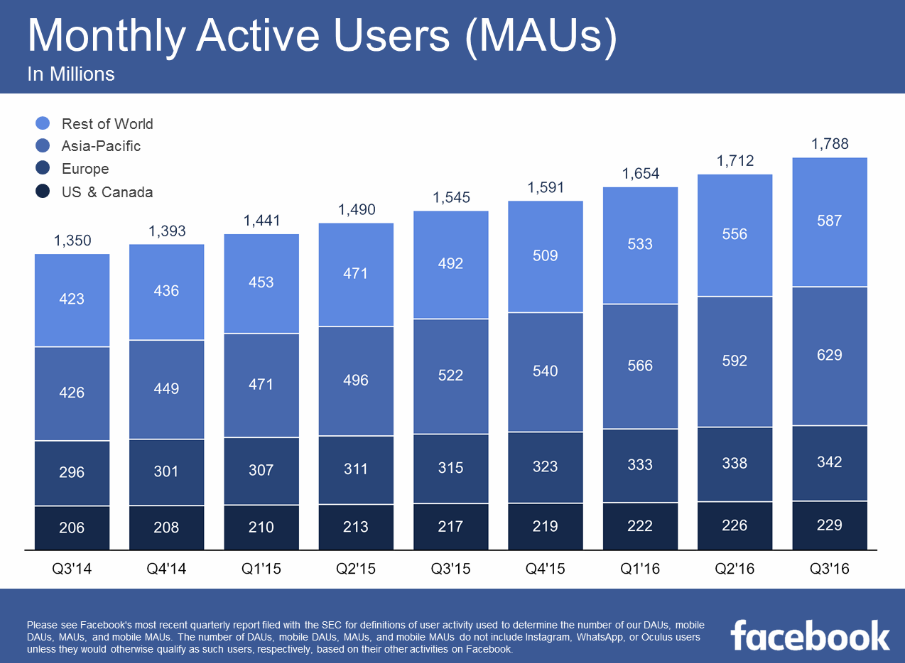 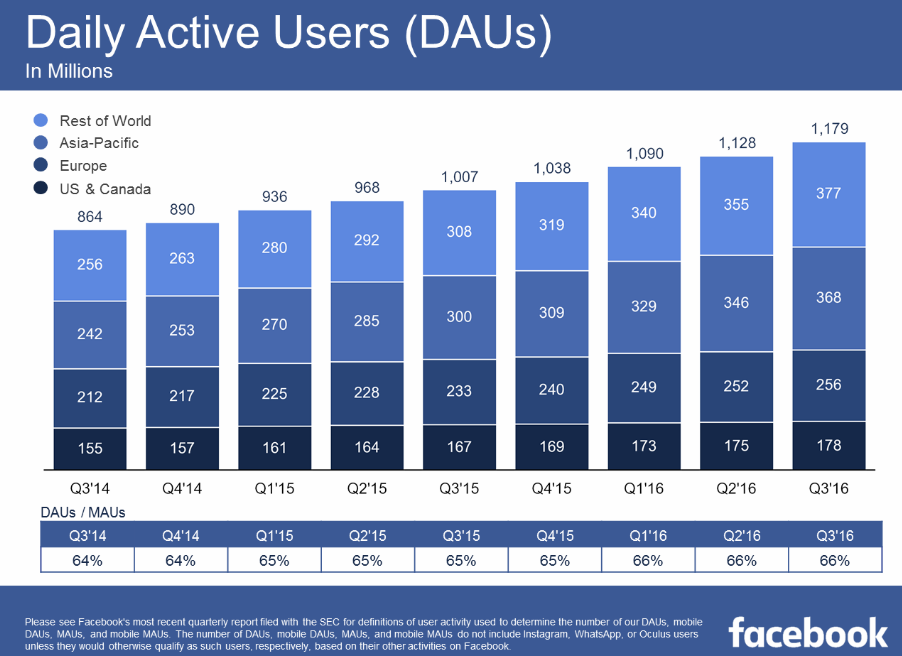 That's an increase of 17% year-over-year - Facebook added 51 million daily active users on the previous quarter. To put that in perspective, 51 million people would put a nation among the top 30 most populated on Earth - Facebook's added an entire nation worth of users (and a significant sized one at that) in a single quarter. 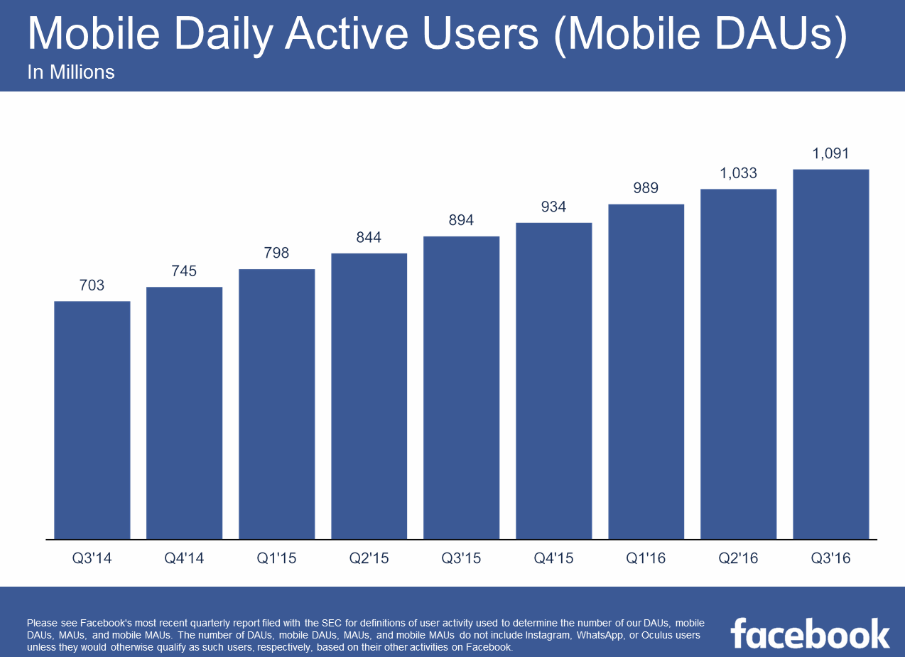 While mobile only MAUs rose over a billion for the first time. 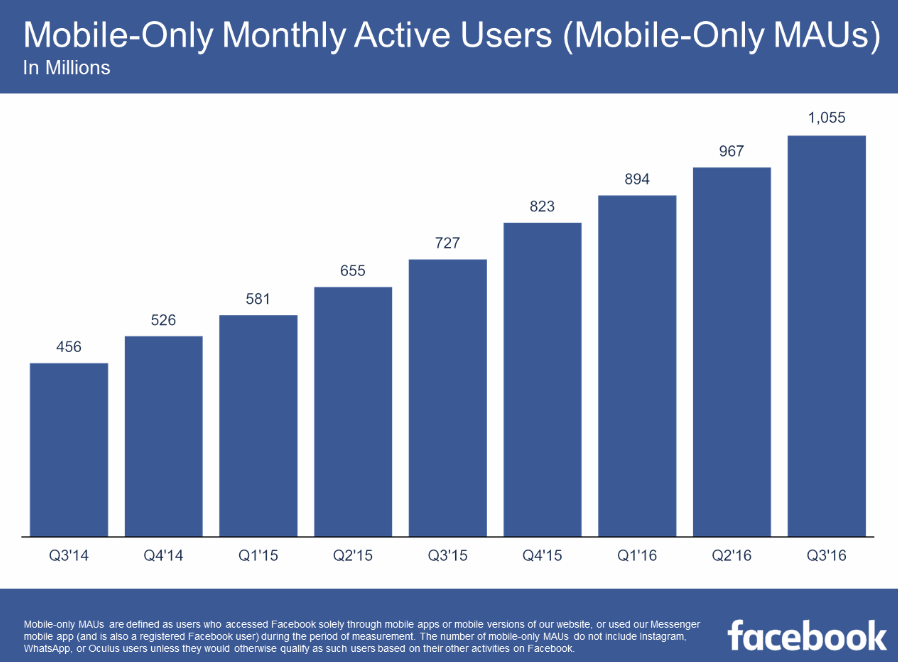 That means 59% of all Facebook users only access the platform via mobile device, again underlining the need for marketers to consider mobile experience in their Facebook efforts.

Facebook's user numbers also show that as Facebook continues to add more users, those users are also increasingly active on the platform. More than 65.94% of all Facebook users are now logging in daily, which is an increase over the past two quarters. Despite reports of younger users switching to Snapchat and controversy surrounding their Trending News module, Facebook continues to go front strength to strength.

In terms of revenue, Facebook posted another strong result, bringing in more than $7 billion for the quarter. 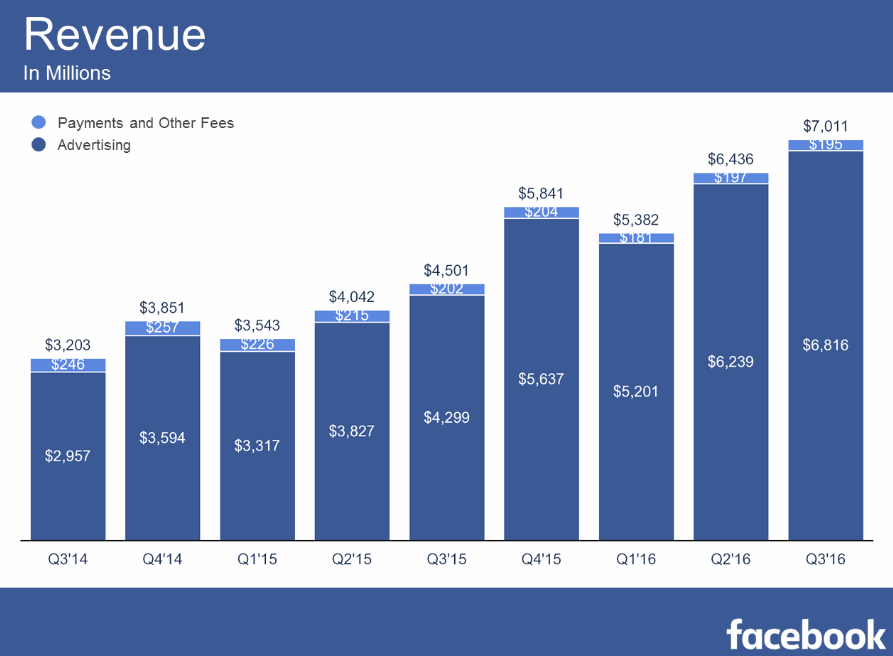 The majority of that revenue still comes from Northern America, which recorded the highest quarter-on-quarter increase (+$348 million), while takings in the Asia-Pacific region also saw a big jump (+$129 million). Mobile advertising revenue accounted for 84% of the total for Q3, up from 78% in Q3.

Average revenue per user also saw the most significant jump in the U.S. and Canada. 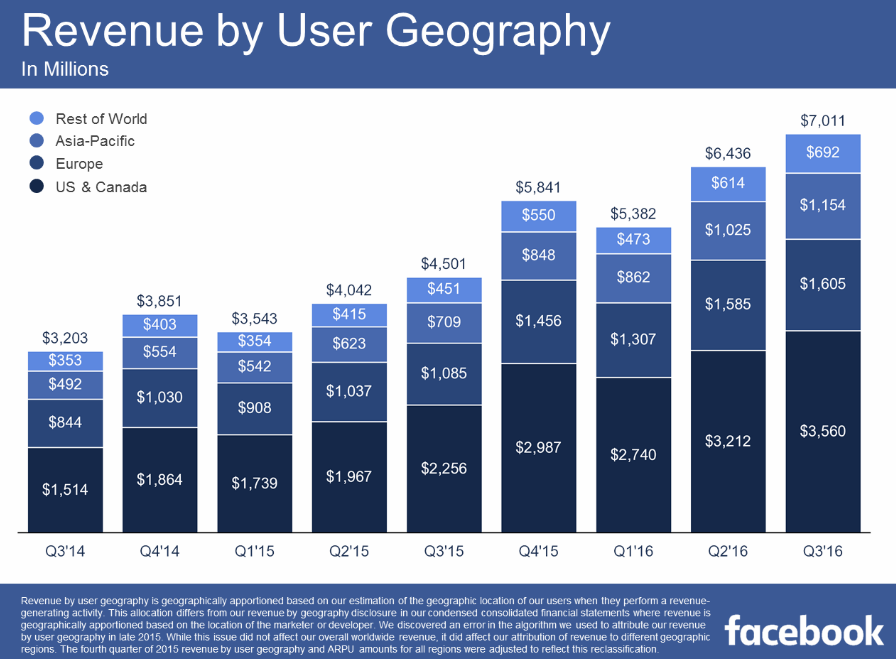 No doubt this was fuelled, in part, by the increased adoption of Instagram ads.

Basically, Facebook posted winning numbers across the board - as noted by The Street, Facebook ad revenue is growing 3x faster than the rest of the ad market.

Zuckerberg says that text has always been the way people communicate on Facebook, but soon, they believe the camera will be the main way we share. This effectively flags Facebook's new Camera option, currently on trial in Ireland, as the next phase for Facebook updates. The new camera tool opens direct from the News Feed and includes a range of Snapchat-like image enhancement tools and features.

Zuckerberg also noted that they're working on a range of new visual tools across Facebook, Messenger, WhatsApp and Instagram which will be revealed in the coming months, providing users with more ways to express themselves via social apps.

In terms of current trends and usage, Zuckerberg noted that the Olympics drove 1.5 billion interactions across the network (while highlighting that a lot of athletes used the platform to 'go Live'), while there's also been more than 5.3 billion posts comments, shares likes related to the US Presidential Election, helping boost usage.

Zuckerberg also outlined where each of Facebook's apps is currently situated in their business development plan. As Zuckerberg has noted previously, Facebook has a defined, three-stage process for developing their apps - those stages are:

Based on this framework, Zuckerberg says that Instagram is in the third phase, Messenger is in the second (33,000 Bots are now active on Messenger) and WhatsApp is also in that second stage.

Zuckerberg also quickly mentioned that their recently released Workplace solution - Facebook for the professional environment - is already being used by more than 1,000 organizations, including Starbucks and The Royal Bank of Scotland.

And another interesting note, Zuckerberg said that their evolving artificial intelligence systems are now being used by more than 25% of Facebook engineers in their projects, while also helping them filter out clickbait and terrorist propaganda from the network.

Facebook CFO David Wehner, meanwhile, noted that their efforts to eliminate ad blockers are also helping, with desktop ad revenue growing 18%, year-over-year, for the quarter, compared to around 9% in previous quarters. But on the negative side, Wehner also said that the News Feed ad load may reach its limit by mid-2017, which will impact revenue. That announcement caused a drop in Facebook's share price in after hours trading.

Despite this, the results are hugely positive for The Social Network overall. The fact that the platform's gaining new users at all is pretty amazing, but the rate at which that growth is coming is astounding, and it's entirely possible that they can maintain that momentum, particularly with Facebook connecting more than 40 million people through their Internet.org initiative in the quarter.

There's no denying Mark Zuckerberg's social behemoth - and as they ramp up efforts to snuff out competitors and incorporate more functions, Facebook's on track to keep growing into the foreseeable future.